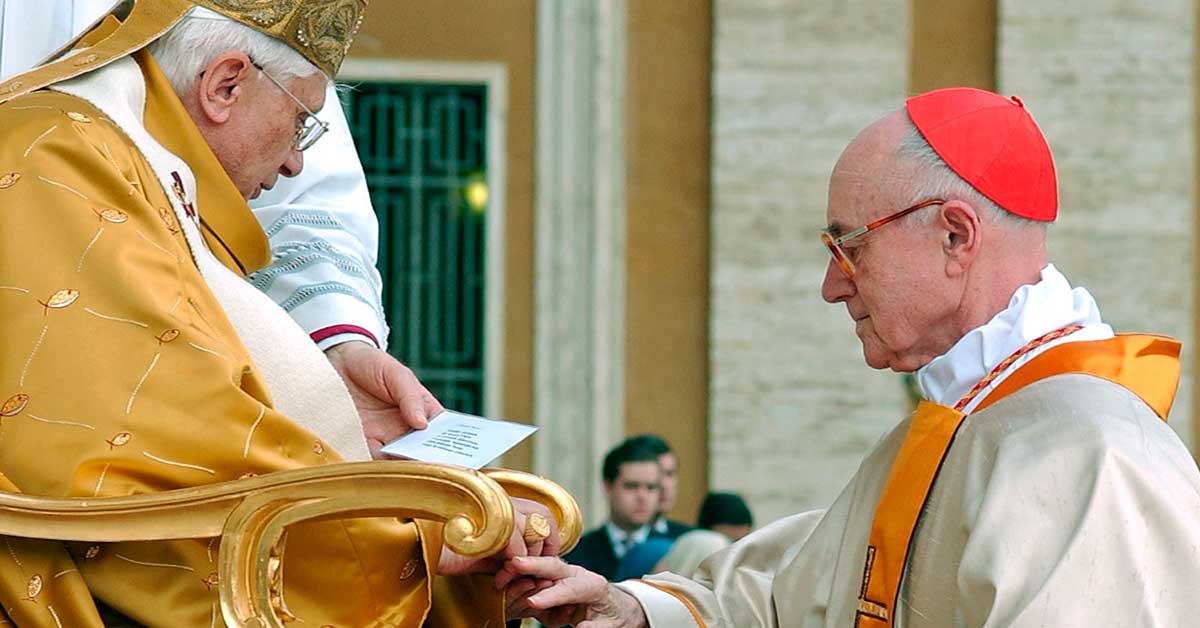 French Cardinal Albert Vanhoye of France receives his ring from then-Pope Benedict XVI during a consistory in St. Peter’s Square at the Vatican March 25, 2006. Cardinal Vanhoye, a Scripture scholar and the oldest member of the College of Cardinals, died July 29, 2021, at the age of 98. (CNS photo/L’Osservatore Romano)

In a message of condolence, Pope Francis praised the cardinal as “a zealous religious, spiritual son of St. Ignatius, expert teacher, authoritative biblical scholar, esteemed rector of the Pontifical Biblical Institute, (and) diligent and wise collaborator of several dicasteries of the Roman Curia.”

“I think also of his love for the ministry of preaching, which he exercised with generosity, animated by the passionate desire to communicate the Gospel,” the pope wrote.

As secretary of the commission from 1990 to 2001, he worked closely with the commission president, then-Cardinal Joseph Ratzinger, prefect of the Congregation for the Doctrine of the Faith. Cardinal Ratzinger was elected pope in 2005 and made then-Father Vanhoye a cardinal in his first consistory in 2006.

Announcing his death, the Jesuits said, “In 1941, at the age of 18, he crossed all of France on foot to enter the novitiate of the Society of Jesus in Le Vignau. It was a courageous undertaking, as half of France was occupied by the Germans; to reach the free zone, he had to cross the demarcation line clandestinely in order not to be caught and sent to Germany to join the number of young men working for German industry.”

Prior to his ordination in 1954, he studied literature at the Sorbonne in Paris; philosophy in Vals, France; and theology in Enghien, Belgium. After ordination, he earned his degree in sacred Scripture from the Jesuit-run biblical institute in Rome in 1958 and his doctorate there in 1961.

He taught New Testament exegesis in Chantilly, France, for three years before returning to Rome as a professor at the institute.

Cardinal Vanhoye’s death leaves the College of Cardinals with 220 members, 123 of whom are under the age of 80 and eligible to enter a conclave to elect a new pope.