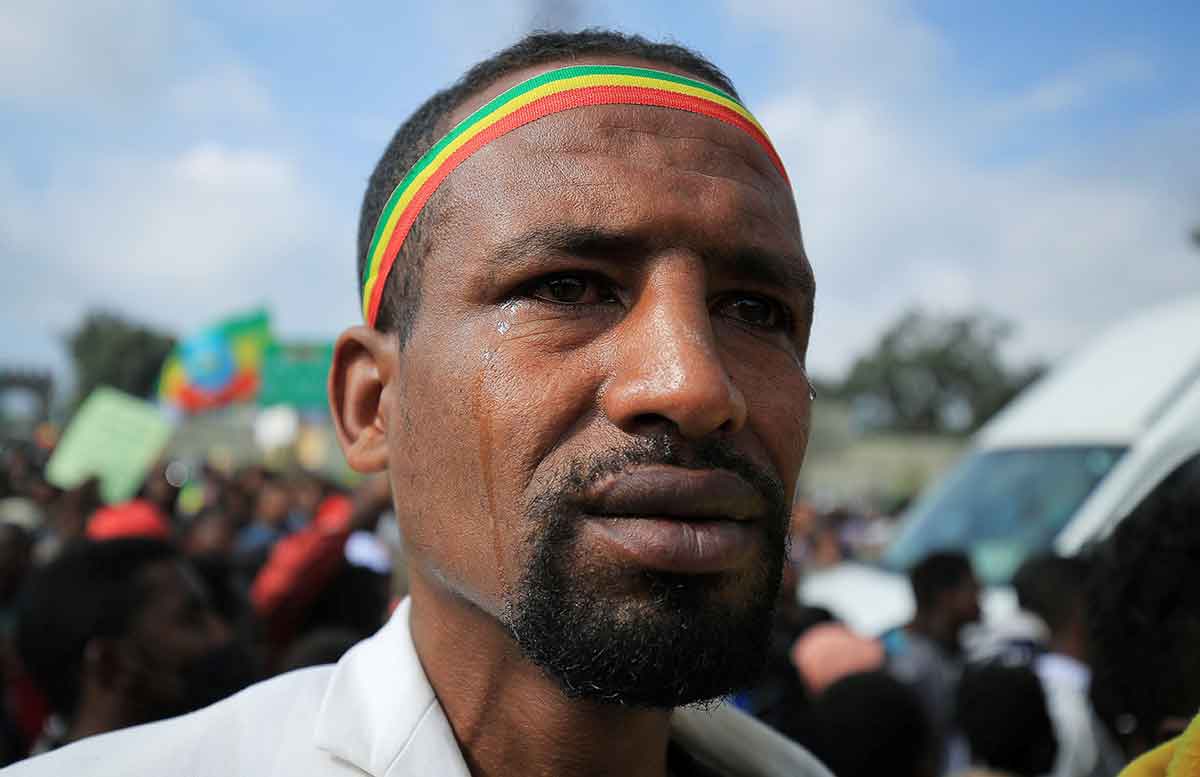 A man cries during a rally to support the National Defense Force and to condemn the expansion of the Tigray People Liberation Front fighters into Amhara and Afar regional territories at the Meskel Square in Addis Ababa, Ethiopia, Aug. 8, 2021. (CNS photo/Tiksa Negeri, Reuters)

By Fredrick Nzwili – The Catholic Church in Ethiopia has suspended emergency delivery of aid in Tigray, following the escalation of fighting and tensions in the region in the country’s north.

The church, which has been coordinating support from international Caritas organisations as well as other local and international partners, has raised nearly $1.8 million to respond to the needs of people affected by conflicts in the country. More than 75% of the funds had been used to respond to instabilities in Tigray.

“At present the current tensions in the northern area of the country force the church to suspend the emergency response intervention,” Father Gabriel Woldehanna, deputy general secretary of the Ethiopian bishops’ conference, said in a briefing to a delegation sent by the bishops of the Association of Member Episcopal Conferences in Eastern Africa.

The Catholic agencies have been some of the biggest movers of aid in the region, where the fighting started in November.

Ethiopian Prime Minister Aby Ahmed Ali launched an attack on the Tigray People’s Liberation Front – former rulers of the semi-autonomous region – accusing them of seizing the national army base in Mekele, the regional capital. Fighting spread to the neighbouring states.

The United Nations said more than 2 million people have been displaced. Some aid officials fear famine as humanitarian agency trucks loaded with food failed to reach the people due to fighting.

With the conflict and tensions escalating, the bishops in AMECEA had dispatched a delegation to deliver a message of solidarity to Cardinal Berhaneyesus Souraphiel, president of the Ethiopian bishops’ conference. The East African bishops are concerned that the conflict will affect countries in the region.

At same time, Cardinal Souraphiel wants the AMECEA bishops to play a leading role in the country’s peace building, reconciliation and post-disaster trauma healing. He urged the bishops to convince their respective heads of states to exert a constructive influence on Ethiopia.