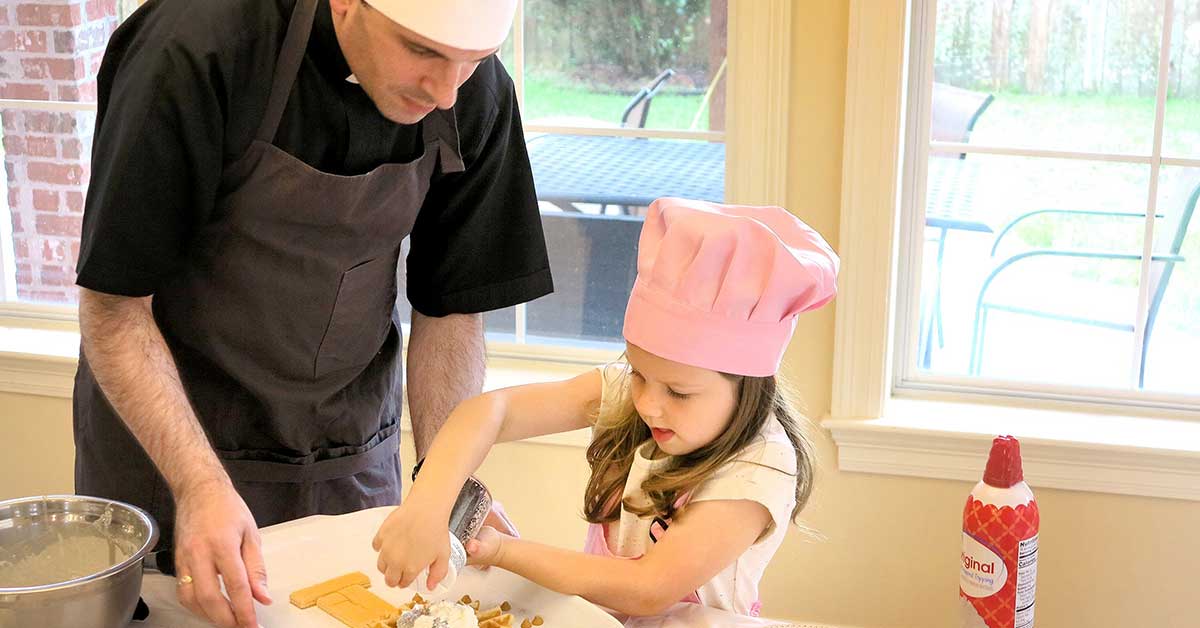 Father Robert Cooper,  of Divine Mercy Church in Kenner, Louisianna, holds a plate of waffles as 4-year-old Lucy Delatte puts whipped cream on the dish as the two film a Facebook Live segment in which they demonstrate how to make “Monstrance Waffles.” The video, which aired June 3, 2021, taught viewers about the sacred receptacle before the feast of Corpus Christi. It also led to “Cooking with Father Cooper,” a Facebook Live series that is produced and filmed by Lucy’s mom, Becky, in her Kenner kitchen. (CNS photo/Beth Donze, Clarion Herald)

By Beth Donze – While brainstorming ways to help her fellow parishioners at Divine Mercy Church in Kenner, Louisiana, prepare for Easter, Becky Delatte thought of a simple recipe she had made with her mother ever since she could remember.

On Good Friday, the duo would sprinkle cinnamon sugar onto a regular-size marshmallow, wrap it up into a ball of canned biscuit dough and refrigerate the concoction for three days.

After baking the dough ball on Easter morning, the surprise would come as soon as they bit into their breakfast treat: The cinnamon-sugar laced marshmallow, representing Jesus’ spice-anointed body, had melted and disappeared inside its “tomb” of dough, creating a hollow space reminiscent of the empty burial chamber found after Christ’s resurrection.

“It’s a great visual for young kids to see that the tomb is empty,” said Delatte, who asked Divine Mercy’s pastor, Father Robert Cooper, if he would be willing to demonstrate the “Resurrection Roll” recipe on a Facebook Live video on Holy Thursday, as the parish entered into this year’s Triduum.

Since then, “Cooking with Father Cooper,” a Facebook Live series produced and filmed by Delatte in her Kenner kitchen, has become a parish sensation that takes the Gospel to viewers’ homes through one of Louisiana’s favourite pastimes: food.

A few days before an important feast day or celebration related to a Catholic tradition, Father Cooper and Lucy go live to whip up delicious treats themed to coincide with those feasts.

For example, when Delatte learned that a pretzel’s three open spaces were designed by a monk to represent the three persons of the Holy Trinity, she organised a show in which the chefs made “Chocolate-Dipped Peanut Butter Pretzels” – to prepare parishioners for the May 30 feast of the Holy Trinity.

“The church has so many cool symbols that are attached to it,” said Delatte, who, with husband Scott, has another daughter, 1-year-old Margaret. “That’s one of my favourite things about the Catholic Church.”

Delatte, who is Divine Mercy’s director of communications and media, believes that simple recipes, bursting with faith-based symbolism, can evangelise, teach and reinforce catechesis every bit as much as a panel of stained glass, a statue of a saint or a textbook.

“These recipes are a fun, easy thing families can do together because they are not complicated,” said Delatte of the segments, which run 15 to 25 minutes in length and are available to watch after each live episode.

Since the inaugural “Resurrection Roll” episode, the “Cooking with Father Cooper” cast and crew have followed up with instalments including “Divine Mercy Brownies,” made in honour of the parish’s namesake and Divine Mercy Sunday, which was April 11 this year; “Edible Rosary,” which aired in May and paid tribute to Mary; and “Pentecost Cake,” with a dozen white candles – symbolising the 12 apostles in the upper room – and one blue candle – representing Mary – into a cake.

By July 19 the series on Facebook Live was up to its ninth episode, which featured snake cookies, “an easy and memorable family activity that helps explain sin as well as the hope we have of redemption,” said the show’s intro.

But just two months into its run, the recipe presented on June 3 revealed the series had already become a well-oiled machine.

After donning his chef’s apron and helping Lucy, a St Elizabeth Ann Seton kindergartner, with hers, Father Cooper introduced viewers to “Monstrance Waffles” in anticipation of the feast of Corpus Christi.

“A monstrance, for those of you who may not know, is one of those articles that we use to hold the Blessed Sacrament – to hold the Eucharist – so that we can bring the Eucharist in procession and adore the Lord in the Eucharist,” said Father Cooper, who went on to show how edible monstrances can be made from scratch or with store-bought waffles.

“Remember, this is very hot, Lucy. We want to make sure we’re very careful,” said the priest, dousing the electric waffle-maker with nonstick spray.

As the two waited for the waffle batter to set, Father Cooper updated his parishioners on Divine Mercy’s ongoing appeal for donations of activity books, toys and gift cards to distribute to the families of sick and terminally ill children at Angels’ Place, a charity for families with children diagnosed with life-threatening illnesses.

Lucy demonstrated how to create the “stem” of the monstrance waffle – by making a line of sugar wafers – and added “rays” of butterscotch chips and sprinkles to symbolise the glory of God shining forth through the Eucharist.

“You can use butterscotch chips, you can use chocolate chips, you can use whatever you like,” said Father Cooper, before adding one final but important touch: a circle of whip cream at the centre of the waffle to represent the consecrated host – the Blessed Sacrament.

“This is a wonderful way to celebrate and remember the presence of Jesus in the Eucharist,” Father Cooper said. “It reminds us, boys and girls, that we’re called to be like a living monstrance. We receive Jesus and then we’re (also) called to bring him into the world every day.”

Although he doesn’t claim to be a cook himself, Father Cooper was raised in New Orleans in a Sicilian American family of talented cooks and bakers.

“Pretty much everything is centred on the dinner table,” he said of his family. “It was the ’11th Commandment’ – you had to be there on Sunday for dinner, and if you missed, it was a grave sin.”

The cooking segments, intentionally designed to encourage families to make the recipes with their children and grandchildren, are “a wonderful way to bring food and our religious faith together,” the priest told the Clarion Herald, newspaper of the Archdiocese of New Orleans.

Using visuals is a catechetical technique that Father Cooper also has incorporated into his homilies over his 14 years as a priest, especially during school Masses. For example, for his first homily of the school year, he unpacks a backpack containing basic school supplies such as paper, folders, scissors and crayons. The final item unpacked by the priest, just as his young congregants think the bag has everything they need for school, is an image of Jesus.

“While all of those other (school supplies) are important, the most important thing is that we always take Jesus with us,” Father Cooper explained. “I want to be able to reach the children at their level, and because our kids are so visual, we need something to be able to capture their attention.

“The best part about (using props) is that I originally thought I was speaking only to the children. But I have found over the years that it also has been beneficial – and maybe even more beneficial at times – for the adults who are in the congregation.”

As a live production, the cooking show has many moments of levity, such as the time the two presenters used an electric mixer to make buttercream frosting from scratch.

“What does every child want to do whenever they get homemade frosting? They want to lick the spoon,” Delatte said. “Lucy grabs the whisk and sticks the whole thing in her mouth! (The frosting) was delicious, but we quickly learned to use canned frosting from then on!”