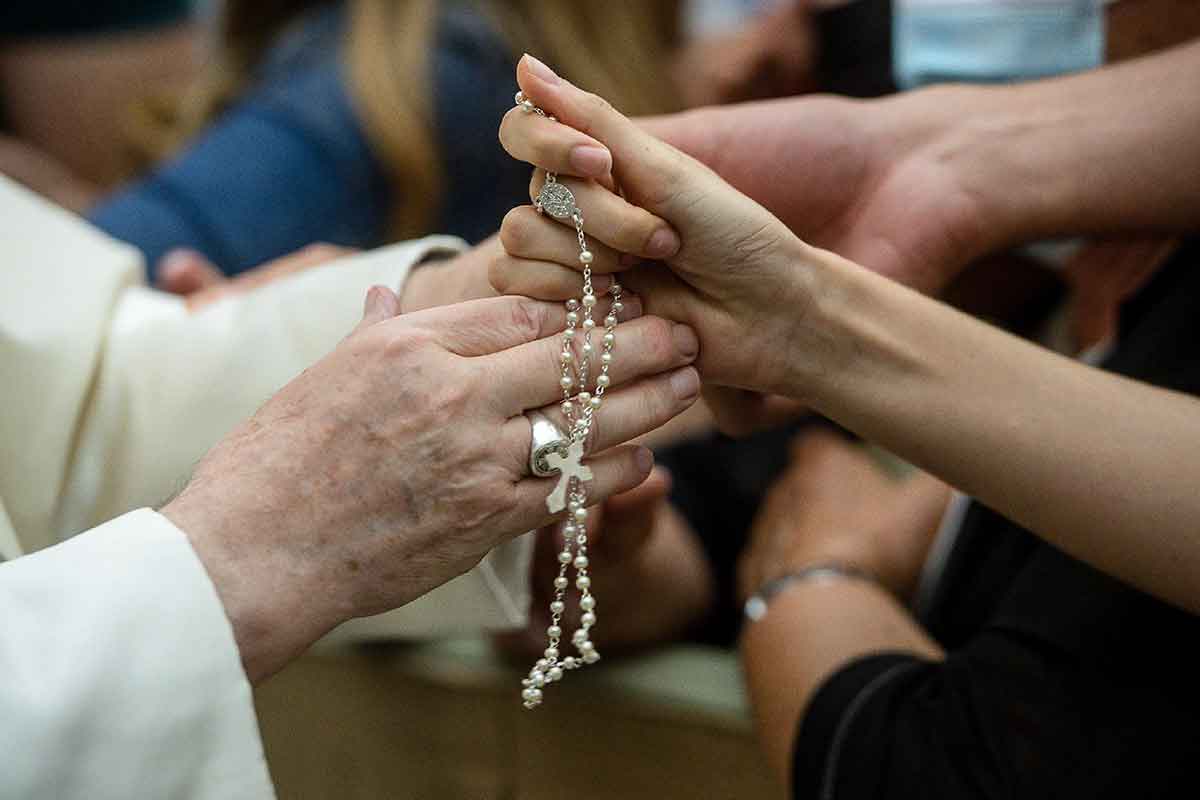 Pope Francis greets a person with a rosary during his general audience in the Vatican’s Paul VI hall on August 18, 2021.  (CNS photo/Vatican Media)

By Carol Glatz – Often throughout the Covid-19 pandemic – with its mandates and restrictions aimed at safeguarding people’s lives and health – the importance of safeguarding religious freedom became a major issue.

But too often that focus obscured or neglected to highlight the core of the church’s mission, two theologians told Catholic News Service Aug. 19 in email responses to questions.

“Too much focus – sometimes the only focus! – was laid on participation in the Eucharist, on the question whether Mass can be held or not and under which regulation,” said Sigrid Müller, a moral theologian and head of the institute for systematic theology and ethics at the Catholic Theological Faculty of the University of Vienna.

“This created the impression that the church is but another congregation of people,” for example, like a sports club, “which needs to be regulated because of the gathering of people,” she said.

The great mission and message of the church, “‘We are there for you if you are ill, if you feel afraid, if you feel lonely,’ was often not heard,” she said, although priests and parish workers all over the world have done tremendous work in consoling families who have lost a member, in burying victims of the pandemic.

“The church is there for times of trouble” with its members working in hospitals, helping the elderly, reaching out to families and more, she said.

It is important people understand the parish as “a community of life and not only as a community of prayer,” which can be hard to see in countries that have strong support systems and do not rely so much on the church for social services, Müller said.

The church community is meant to offer help, and the big questions that were often unasked, she said, were: “Who needs care because he/she is lonely? Who needs someone to talk to because he/she is afraid? Who needs support because work and homeschooling go beyond one’s strength and personal resources? Which support networks can we create as members of a parish?”

M. Therese Lysaught, a theologian and corresponding member of the Pontifical Academy for Life, said the real risks facing the church and practising its faith “come from our own failure to be a church comprised of the sort of missionary disciples described in ‘Evangelii Gaudium,'” Pope Francis’ apostolic exhortation on “The Joy of the Gospel.” In it, the pope calls for a new order of priorities in ministry in which the church moves from an attitude of self-preservation to looking outward with mission-oriented evangelisation.

“I think the biggest danger lies internally – from those who are using the pandemic as a pretext to continue to reject Pope Francis’ powerful theological vision that prioritises unity, the implementation of the Second Vatican Council, and a message of mercy, charity and justice, especially for the poorest and most vulnerable in the world,” said Lysaught, who teaches at the Neiswanger Institute for Bioethics and Healthcare Leadership of the Stritch School of Medicine at Loyola University in Chicago.

“Christianity was born out of 300 years of actual oppression by the Roman Empire. If our religious practice could be imperilled by public health measures that are applied evenly to all organisations for the sake of the public good, then the problem is with our religious practice,” she added.

Müller said Catholic teachings can help people navigate the uncertainties and choices to be made during the pandemic.

For example, she said, some people think that depending on the body’s immune system “is more natural” than vaccination. “As Catholics, we ought to keep in mind that normally both natural and traditional (classical) medicine can be applied in order to heal, if they are effective and good for the patient.”

For those who feel Covid-19 does not pose a big enough risk for them so they put off vaccination, the person must ask whether they can avoid putting the people around them at risk, she said.

“The main question is whether we are ready to love the other as much as ourselves, which would lead to searching for a right balance” and think of those who cannot be vaccinated and “therefore depend on the others’ help to minimise the risk of infection,” she said.

Lysaught said discernment and forming one’s conscience to make moral decisions require “taking seriously the position of the pope, various other authoritative magisterial bodies and documents, the scientific evidence – which changes as we learn more about this virus and as the pandemic continues to unfold, and always being oriented toward the charitable care of others.”

“The centre of Catholic moral analysis is the virtue of charity – the virtue of self-gift or self-emptying love for the good of others,” she said, because this is who Catholics understand God to be, as Pope Benedict XVI taught.

Who God is and how he acts, “this is how Catholics are called to live and act in the world,” she added.

Charitable care, “which is another word for love, overcomes fear,” she said, and a lot of Catholics have been a great witness during the pandemic.

Catholic health care workers have “stood valiantly on the front lines,” working under “truly traumatic conditions to care for wave upon wave upon wave of desperately sick people, holding the hands of their patients as they died because families couldn’t be there. And now it’s starting all over again. I don’t know how much more they can take,” she said.

So many bishops around the world have been giving “sound theological arguments in favour of public health measures, creatively developed new ways for Catholics to worship together and continue their ministries … rolled up their sleeves and witnessed the importance of being vaccinated, opened churches as vaccination sites, and have vocally and visibly cooperated for the common good,” Lysaught said.

“And Catholics across the country should be applauded,” she said, as approximately 80% of Catholics in the US were vaccinated as of the end of July, according to a report by Public Religion Research Institute.

She said Catholics and their leaders need to “now turn their attention to what we have learned from this pandemic and how we can, as a church, do better going forward in living the authentic call and mission of being Catholic – the works of mercy, accompanying the elderly, attending to the lonely, caring for our brothers and sisters across the globe – emptying ourselves as Christ did.”