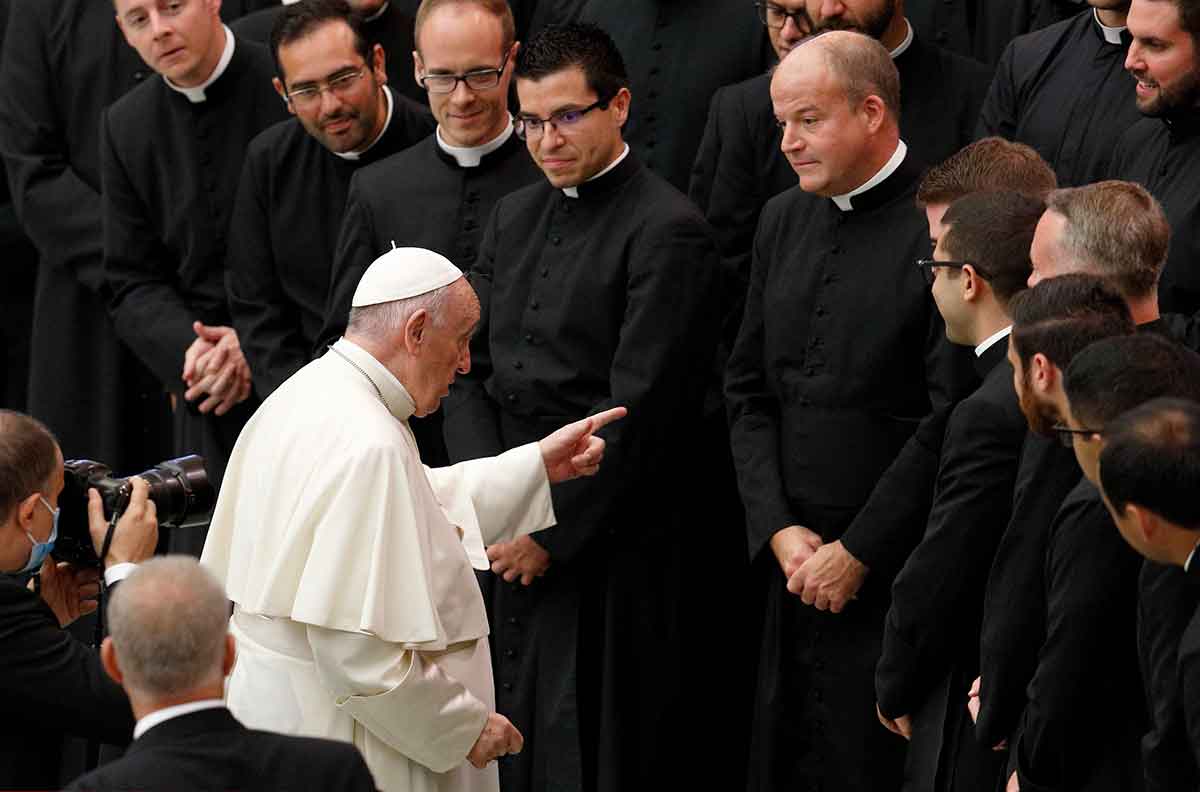 Pope Francis gestures in front of Father Peter Harman, rector of the Pontifical North American College, as he meets seminarians from the college during his general audience in the Paul VI hall at the Vatican Sept. 29, 2021. (CNS photo/Paul Haring)

By Junno Arocho Esteves  –  Even the greatest sinners can become just in God’s eyes if they allow the grace offered by Jesus’ death and resurrection to give them the strength to be holy, Pope Francis said.

“Justification” is a gift from God that “allows us to recuperate the innocence lost through sin,” the pope said Sept. 29 during his weekly general audience.

“Allow me to say this: Deep down, we are saints but with our works, we become sinners,” he said. “Let us allow the grace of Christ to come up so that this justification may give us the strength to go forward.”

The pope continued his series of talks on St Paul’s Letter to the Galatians by looking at the apostle’s proclamation that believers are justified by Christ’s death and resurrection.

Justification, Pope Francis explained, does not come from fulfilling all the commandments but “comes before” because it is “God’s merciful initiative of offering forgiveness.”

“This is our God, who is so good: merciful, patient, full of mercy, who continuously forgives. And justification is God forgiving from the beginning through Christ; it is the mercy of God who offers forgiveness,” the pope said, departing from his prepared remarks.

St Paul’s words are rooted in his personal experience, the pope explained. After years of being convinced “that justification consisted in the scrupulous observance of the precepts of the law,” his encounter with Christ on the road to Damascus allowed “him to discover a truth that had been hidden: We do not become just through our own effort, but it is Christ, with his grace, who makes us just.”

“We are justified, we are saved by pure grace, not because of our merits,” the pope said. “We are sinners, yes, but we go on the path of life with this grace of God that justifies us every time we ask for forgiveness.”

While observing the commandments as “essential” to one’s spiritual life, the grace received from Christ is “fundamental” because it “allows us to love in concrete ways.”

“Justification, if it does not flourish with our deeds, will lie there buried under the earth like a dead person,” he said. “It’s there, but we should make it flourish through our deeds.”

Pope Francis said the justification of a sinner is both a gift from God and a reminder for Christians that “the power of grace needs to be coupled with our works of mercy, which we are called to live to bear witness to how tremendous God’s love is.”

“Thus, the light of faith allows us to recognise how infinite God’s mercy is, his grace that works for our good,” the pope said. “But that same light also makes us see the responsibility that has been entrusted to us to collaborate with God in his work of salvation.”