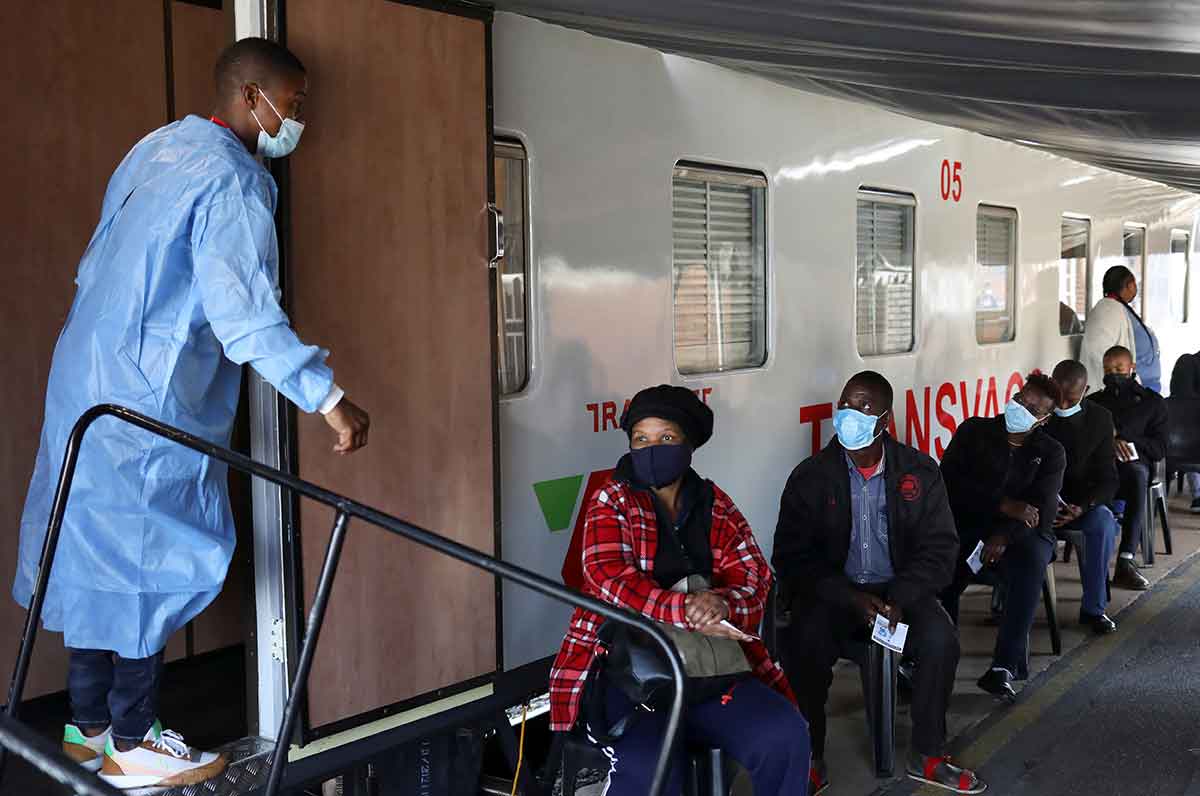 A health care worker talks to people as they wait to register next to the Transvaco coronavirus vaccine train Aug. 30, 2021, in Springs, South Africa. South Africa’s rail company Transnet turned a train into a vaccination centre on rails to help the government speed up its vaccine rollout in the country’s remote communities. (CNS photo/Siphiwe Sibeko, Reuters)

It’s easy for Canada to be smug about its COVID-19 vaccination rate, but we can’t afford that luxury – not when so much of the world is still starving for vaccine relief.

Canada has already distributed close to 64 million vaccines for its citizens and can boast of having one of the highest vaccination rates in the world, with more than 65% fully vaccinated and three-quarters having at least one dose. In the U.S., more than 417 million first and second doses have been given and it is now talking about administering a third dose – a booster – beginning in September.

Meanwhile, The Lancet, a medical journal, reports that of the 4.5 billion doses of vaccine that have been injected into people’s arms worldwide, only 12.6 million have been given in low-income countries as of early August. As Tedros Adhanom, director-general of the World Health Organisation, said: “Vaccine injustice is a shame on all humanity.”

COVAX was created to help ensure an equitable distribution of vaccines, especially with poorer nations, but it has not lived up to its full promise.

Designed as an international clearinghouse for vaccines, rich countries anted up big dollars that served two purposes: ensure they could address any supply shortage in their own country, as well as contribute to the greater good of ensuring middle- and low-income countries could get a fair share.

So far COVAX has sent about 209 million doses to 138 countries, but that list also includes rich nations like Britain, Australia and, yes, Canada. To its credit, Canada has overcome its slow start in the vaccination race and its $545-million commitment to COVAX and the global fight has been bolstered in recent months.

Still, while prosperous G-7 countries have pledged to donate a billion doses to COVAX to help out poor nations, WHO says it will need 11 billion to defeat this pandemic.

It’s a simple truth: Until everyone has a level of protection, we are all vulnerable to the effects of the virus. We have seen how the Delta variant of the virus has propelled us into yet another wave of infections. The unvaccinated are most vulnerable, of course, but the variant has also been found to weaken the effectiveness of the vaccines we now have.

We are at a tipping point in this fight and the need to effectively distribute vaccines to poorer nations must be met, for all our sakes.

The official death toll of this virus has climbed above 4.4 million – 27,000 of those in Canada. We are fortunate in this country that we have the resources — and the obligation – to protect ourselves and our families.

There are hundreds of millions more around the world who aren’t as fortunate. We pray their cries are heard.

The views or positions presented in this or any guest editorial are those of the individual publication and do not necessarily represent the views of  The Southern Cross or Catholic News Service.