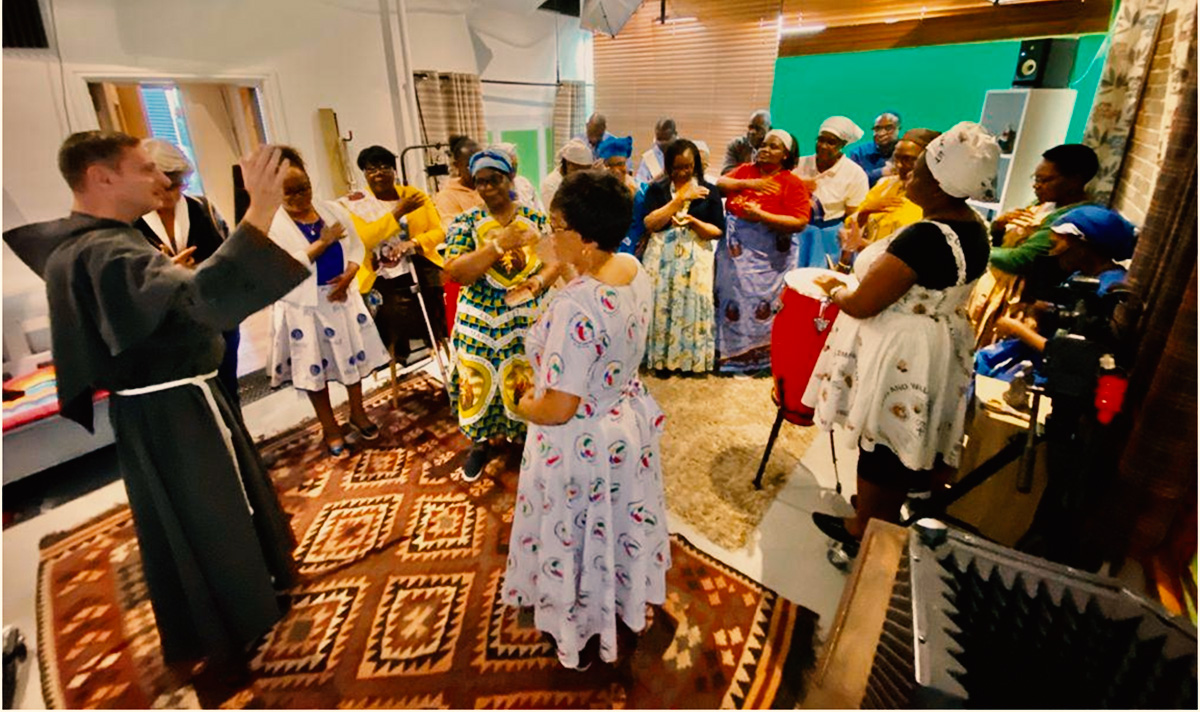 Benjamin Takavarasha tells the Southern Cross how a pilgrimage to a Marian shrine in the UK led to Zimbabwean Catholic music being heard across the globe.

By Benjamin Takavarasha – A group of UK-based Catholics went on a retreat at the Marian Shrine of Walsingham, dubbed “England’s Nazareth”, which originally dates from the 11th century. The retreat was organised by a charity called Behold Your Mother (Jn 19:27) and was led remotely by Zimbabwean Bishop Raymond Mupandasekwa of Chinhoyi, Bishop, patron of the charity.

The Zimbabwean group made an early impression. After arriving, they attended a scheduled evening Mass at the church of the Annunciation in Walsingham village, celebrated by the shrine’s rector Mgr Philip Moger OFM.

The group sang one of the hymns, in Shona and in their usual way with drums and rattle. It made such a deep impression that it led to two invitations.

The group was asked to sing at the shrine’s main Mass, celebrated at midday, on both the Saturday and the Sunday. The congregation consisted of pilgrims coming from across the country. It was also livestreamed across the world. As the group sang on both days from the section of the basilica reserved for them, the appreciation across the mixed congregation was palpable, epitomising the Catholic Church at its Catholic best (Galatians 3:28, Colossians 3:11).

As the group sang, it was the drum that took pride of place and the appreciation across the whole congregation was palpable. On the latter as one Zimbabwean poet put it: ‘By what magic lyric hath those drum beat sounds/Like no other to so touch ev’ry sinew of my being.’

The group was also asked by ETWN, the global Catholic network and largest religious media network in the world, to have four hymns of their choice recorded.

There is an irony in the drum being the main musical instrument in Zimbabwean Catholic music liturgy, against the fact that it is an instrument historically of African traditional non-Christian worship. The drum was introduced into Catholic worship in the early 1960s at the behest of the Bethlehem Fathers, in particular Bishop Alois Heane SMB in the diocese of Gweru.

Initially, there was opposition from some about introducing the drum as an instrument of worship, associating it with ancestral/pagan worship and as such an act of sacrilege (Leviticus 19:31,20:6). The latter view is encapsulated by South African poet Oswald Mtshali in the title poem of his celebrated collection The Sounds of a Cowhead Drum: “I am the drum on your dormant soul/cut from the black hide of a sacrificial cow./I am the spirit of your ancestors…’

In spite of initial opposition by some, the drum was soon adopted across all Zimbabwean Catholic dioceses, and subsequently also by other major Christian denominations — and, if the events of Walsingham are an indication, now embraced and appreciated by Christians worldwide.