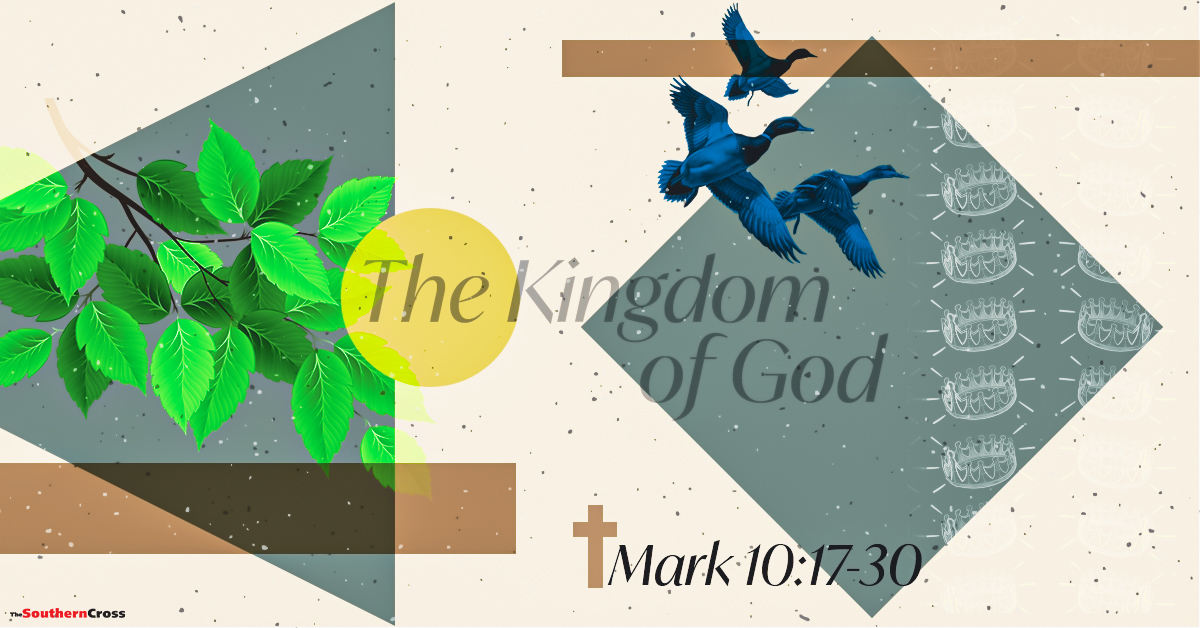 Sermon and Christian Act in the Word –

Theme: What must I do to inherit eternal life? Just do Good, my brother & sister!

Point of Reflection: Making wise choices requires a clear focus. Solomon wanted to be a just and great king and achieved it preferring God’s wisdom to wealth and power. The author of Hebrews exhorts Christians to make a wise choice in responding to God’s word, which alone can shape their lives in a way that will secure God’s favourable judgment. The wealthy man made a bad choice in setting his wealth over Jesus. His reliance on material securities bound him to this earth, and barred his way to eternal life. The most important act of life is just to do good: Just do Good! This is exactly what the Psalmist recognised as he prayed to the Lord, “teach us to count our days, that we may gain a wise heart.” We gain a wise heart by doing good, then, we will inherit eternal life.

Sermon (Reflection):  In the first reading, King Solomon addresses his fellow monarchs and rulers of the kingdoms of the earth. He advises them, that if they are to rule with integrity, efficacy, and justice, to be truly great rulers, they need wisdom from the one true God. Solomon was an ordinary human being, carried in his mother’s womb, born like any other child, cried and lay in swaddling clothes (Cf. Wisdom 7:1-6). However, he achieved unparalleled greatness because he first sought wisdom from God. Wisdom of the highest kind, one which brings insights into the deep mysteries of life, cannot be attained by merely human efforts. Only God can grant this kind of supernatural wisdom and as Christians, we need to pray and do good all time.

King Solomon with prayer and doing good, rightly assumed that possession of God’s wisdom enabled him to rule well and become a respected and successful king. He prayed for wisdom, not for wealth.

Most of us today, pray to God to give us earthly wealth instead of praying for wisdom. As Christians, we need wisdom from God to live well and we get this wisdom through prayer and by opening our hearts to receive the Lord.

Addressing Christians, the author of Hebrews which is the second scriptural reading of this Sunday lays stress on the power of God. He does so to motivate Christians to adhere to the word and obey it. He uses the analogy of the sword to describe how God’s word can reveal and judge the person’s hidden motives and desires.

Just as a sword can penetrate the human body, so also the word of God can separate different parts of the human being, exposing that which cannot otherwise be seen. All attempts to conceal one’s true intentions and thoughts from God are doomed to failure and are futile because God’s word is all-powerful and ever active in revealing and judging everyone in truth.

Writing this, the author indicates that the wise choice, and, in fact, the only choice for Christians, is to hear the word of God and respond to it wholeheartedly, lest one become lost in the deserts of life.

The Gospel passage of this Sunday shows a man in search for the ultimate human goal, which is, eternal life. The man was wealthy, he already enjoyed God’s blessings and security in this life. But he sought for more, namely, immortality. He wanted to have it all, in this life and in the next. That is why in the first reading, King Solomon sought wisdom not wealth, thus, the lesson for us today as Christians, to see for wisdom in prayer not wealth, and wisdom simply entails doing good: Just do good by following the commandment.

Responding to the man’s inquiry about the way to eternal life, Jesus Christ, the good teacher, gave him two responses.

First, somewhat surprisingly, Jesus answered with his own question, “why do you call me good?” This might suggest that Jesus denied his own goodness. In fact, he only pointed out that God is the source of all goodness. Second, Jesus quoted selected commandments from the Ten Commandments, the heart of the Jewish Law, asking the man to obey them. Interestingly, Jesus added, “you shall not defraud”—the demand not found among the Ten Commandments. In response, the man confirmed that he had lived an impeccable life according to the Law, without breaking the commandments or defrauding others. He was a genuine and sincere person, whose wealth was acquired through legitimate means.

But eternal life requires more, what might be sufficient for a good life in this world, is insufficient to secure immortality. Thus, Jesus asked the man to give away all material possessions and follow him. The wealthy man was thus asked to choose between eternal life and his earthly treasures. But he wanted to have both! Faced with a difficult choice, the man found it impossible to let go of all he had. He chose his wealth and walked away from Jesus. He walked away sad, which is Mark’s way of saying that the man realized that the choice he had made was not a wise one.

Jesus used this incident to teach the disciples how wealth can be an obstacle to salvation. In itself, material possessions are not bad. However, wealth becomes deadly if its pursuit becomes the sole focus and purpose of one’s life. In such cases, wealth claims the person’s loyalty and assumes the central role in their life. When this happens, all else, even God himself, are pushed aside and play only a secondary role. This is exactly what happened in the case of the wealthy man.

Jesus went on to emphasise that entry into God’s kingdom and salvation require a difficult but decisive choice. This choice is to make God the greatest priority in one’s life. Such a choice for the wealthy is as difficult as it is for a camel to squeeze through the eye of a needle. This startling image is meant to shock the disciples into the realisation that salvation requires great effort and sacrifice in making the right choices.

Human beings cannot save themselves, only God can. Because only God can grant salvation, it can be reached only through giving absolute priority to God and focusing all one’s efforts on the pursuit of his kingdom. Everything else, especially wealth, becomes a danger if it obscures this purpose.

Peter reminded Jesus that, unlike the wealthy man, he and other disciples had left everything and followed him. Perhaps Jesus’ shocking example of the camel had made Peter worry about his own salvation. Jesus assured his disciples that whatever they had given up will come back to them, be it in different forms. Since they had left their immediate families, they will become a part of a new and numerous family, the family of God’s people. Their property will extend beyond that of their individual possessions. They will also encounter persecution.

Discipleship will include confronting adversity and facing suffering. However, all this ultimately leads to eternal life. Since the disciples had made the difficult but wise choice for Jesus, they will reach salvation, which the rich man desired, but forfeited by an unwise choice of life’s focus.

Christian Act in Word of God “Making best Choice! What must I do to inherit the eternal life”

In modern society today, most people, particularly young people, have many choices available to them. With education and an urban lifestyle there are numerous opportunities and possibilities for choosing an occupation, career and lifestyle. One can also choose whether to believe in God, or became an atheist, or an indifferent agnostic.

Today’s readings suggest the two most important questions that a person needs to ask of himself or herself while making significant life choices. First, like king Solomon, we need to ask ourselves who do we want to be in life. This question goes beyond the choice of a career or occupation. Rather, it is a question of who we want to become in the eyes of others. And such a choice is an ongoing one for the young and the old, as it is made every day anew. In his choice, Solomon was concerned with how he would impact others, not with how to control his subjects.

This raises an important question for us. Do we want to be evaluated on the basis of what we achieved for ourselves, or on the basis of our impact on others? In simple terms, do I make my choices to stand apart from the rest by becoming richer, more famous or more influential than everybody else? Or, am I concerned about becoming important by a life of justice, integrity and concern for the wellbeing of others?

The second important question is that of my focus in life. Many people stubbornly refuse to consider that their life on earth will end one day. With it, all securities and wealth that they have gathered, usually with great effort and concern, will cease to have any meaning. Life choices need to be made in the broader perspective of life that goes beyond this world. What determines and secures my life, after all that I have here on earth is taken away from me? Of course, we need to secure our life on earth by pursuing education, material security, and advancement. But these can never dominate us so completely as to make us walk away from Jesus. It is only his teaching and his ways that can lead us to live our life on this earth, in such a way as to be on the path to eternal life.

The difficult but wise choice is to put preference on being a true Christian first and then concern ourselves with securing our material prosperity. These two need to be finely balanced, but the faith perspective must never be lost or even obscured, by other concerns.

Action: I will reflect on the values that would draw me closer to God, I choose Heavenly Treasures, not Earthly Treasures.

Prayer: Lord our God, like the wealthy man from the Gospel story of this Sunday, we come to you, asking for guidance on how to live our lives so that we can be united with you in eternity. We ask for guidance and the empowerment of the Holy Spirit, to make the right choices and, if needed, difficult choices, that will bring us closer to you, and make us your servants in this world, we pray through Jesus Christ, our Lord, Amen.