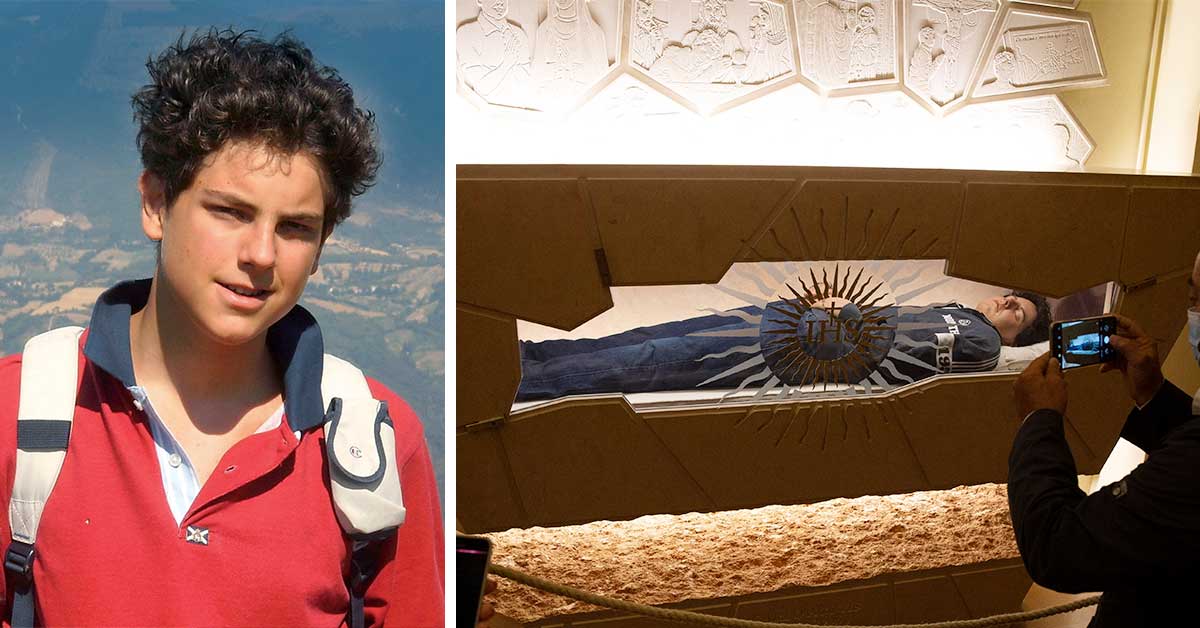 the tomb of Carlo Acutis at the Church of St Mary Major in Assisi, Italy, Oct. 3, 2020. The Diocese of Assisi says an estimated 117,000 pilgrims have visited his tomb since his beatification in October 2020. (CNS photo/Paul Haring)

By Junno Arocho Esteves – Thousands of pilgrims have flocked to the tomb of Blessed Carlo Acutis, the 15-year-old Italian teenager whose use of technology to spread devotion to the Eucharist prompted Pope Francis to hail him as a role model for young people today.

In a statement released Oct. 11, the Diocese of Assisi said that since his beatification one year ago, an estimated 117,000 pilgrims visited the teen’s tomb in the Shrine of the Renunciation at the Church of St Mary Major in Assisi.

The diocese also said that in the lead up to Blessed Acutis October 12 feast day, hundreds of pilgrimage groups have registered to receive catechesis on the beatified teen’s life.

“Every day, I meet families, young people, groups of visitors from every part of Italy, and after the reopening (of the country), from different parts of the world,” said Capuchin Father Carlos Acácio Gonçalves Ferreira, rector of the Shrine of the Renunciation.

“Carlo is a phenomenon of holiness that touches everyone, that pushes young people to approach the church, who helps those who are far from the faith,” Father Ferreira said.

Before his death from leukaemia in 2006, Acutis was an average teen with an above-average knack for computers. He put that knowledge to use by creating an online database of eucharistic miracles around the world.

In “Christus Vivit” (“Christ Lives”), Pope Francis’ exhortation on young people, he said the teen was a role model for young people today who are often tempted by the traps of “self-absorption, isolation and empty pleasure.”

“Carlo was well-aware that the whole apparatus of communications, advertising and social networking can be used to lull us, to make us addicted to consumerism and buying the latest thing on the market, obsessed with our free time, caught up in negativity,” the pope wrote.

In February 2020, the pope formally recognised a miracle attributed to Acutis’ intercession and in October that year, the teen was beatified during a Mass at the Basilica of St. Francis.

According to the Diocese of Assisi, an estimated 48,200 pilgrims visited Blessed Acutis’ tomb in August, the height of the tourist season; visitors came from Italy, France, Slovenia, Germany, Spain and Malta as well as Brazil and the Philippines.

In preparation for his feast day, a prayer vigil was held on Oct. 11 at the Cathedral of San Rufino in Assisi, followed by a morning Mass presided by Capuchin Father Marco Gaballo, vicar of the Capuchins’ Central Italy province.

For the feast day, Archbishop Domenico Sorrentino of Assisi was scheduled to celebrate Mass at the cathedral.