Pope and Religious Leaders Plead for Peace at Colosseum 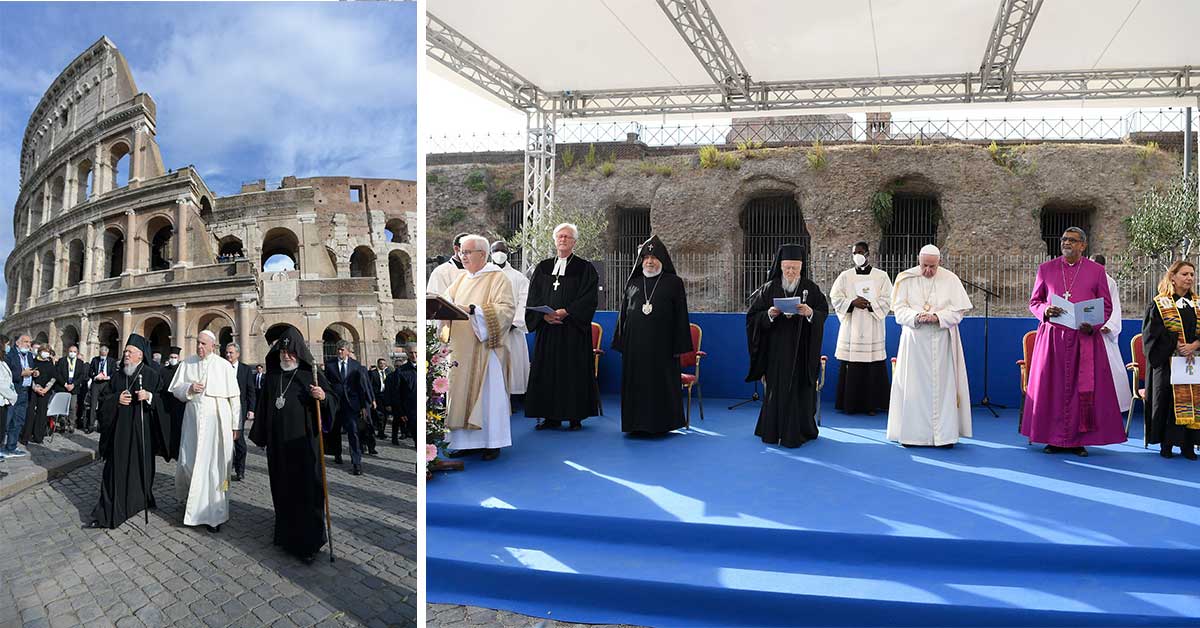 Ecumenical Patriarch Bartholomew of Constantinople, Pope Francis and Catholicos Karekin II, patriarch of the Armenian Apostolic Church, walk together after a Christian prayer service in front of the Colosseum in Rome on Oct. 7, 2021. The prayer service was part of an event to plead and pray for peace. (All photos: CNS/Stefano Dal Pozzolo, pool)

By Cindy Wooden – Standing in front of Rome’s Colosseum, Pope Francis called on members of all the world’s religions to be courageous enough to set aside self-centredness and instead live with true and active compassion for the victims of war and poverty and for the earth.

The pope and Orthodox, Oriental Orthodox, Anglican and Protestant representatives, joined by German Chancellor Angela Merkel, gathered for a brief Christian prayer service on Oct. 7 before joining Muslim, Jewish, Hindu and Buddhist leaders in making an appeal for peace.

Andrea Riccardi, founder of the Community of Sant’Egidio, which organised the meeting and has done so each year since St John Paul II gathered religious leaders in Assisi in 1986, said the need to respond to the COVID-19 pandemic, conflicts and the climate crisis have drawn religious believers together like never before.

Addressing the gathering, the pope urged religious believers to remember a key lesson of the pandemic, “namely, that we cannot remain healthy in a world that is sick.”

Besides COVID-19, he said, “in recent times, many people have contracted the sickness of forgetfulness, forgetfulness of God and of our brothers and sisters.”

That kind of self-centredness, the pope said, “has led to unbridled individualism and the desire for self-sufficiency, which has overflowed in insatiable greed.”

“The earth we inhabit bears the scars of this, while the air we breathe is rich in toxins but poor in solidarity,” he said. “We have thus poured the pollution of our hearts upon creation.”

However, echoing Riccardi, Pope Francis, “in this climate of deterioration, it is encouraging to think that the same concerns and commitments are increasingly becoming the shared patrimony of many religions.”

“Prayer and action can change the course of history. Be courageous,” the pope pleaded.

“We have before us a vision, the same vision shared by so many young people and men and women of goodwill: the earth as a common home, in which people dwell as brothers and sisters,” he said.

Pope Francis noted how in the first century the Colosseum was “the site of brutal mass entertainment: fights between men or between men and beasts; spectacles of fratricide, deadly games played at the cost of human lives.”

“Today, we, too, can be spectators of violence and war, of brothers killing brothers, like games we watch from a safe distance, indifferent, certain that they will never affect us,” the pope said. “The suffering of others scarcely troubles us. Not even the sufferings of victims of war, migrants, young boys and girls trapped in conflicts and robbed of the carefree games of childhood.”

“The lives of people and young children are not playthings. We may not be indifferent onlookers,” he insisted. “On the contrary, we need to empathise with those who share our humanity, its aspirations, its struggles and its frailties.”

“We need to listen to others, make their sufferings our own and look into their faces,” the pope said. “This takes real courage: the courage of compassion, a courage that goes beyond complacency, beyond the mindset of ‘it doesn’t concern me.'”

At the same time, the pope noted that religions also can be part of the problem.

“For the sake of peace, please, in every religious tradition let us defuse the temptation to fundamentalism and every tendency to view a brother or sister as an enemy,” he said. “If there are those in the grip of hostility, factions and partisan games, we ourselves repeat the words of the imam Ali: ‘There are two types of people: your brothers and sisters in faith, and those who are your fellow human beings.'”

Egyptian Sheikh Ahmad el-Tayeb, grand imam of Al-Azhar, told the gathering that the pandemic had laid bare just how impoverished the world had become in terms of individual consciences and responsibility.

“I believe a new appeal is in order to remind people of the presence of God Most High and of the need to draw near to him again, invoking his mercy, with the hope of stopping this pandemic,” the Muslim leader said. “There is no alternative or means but prayer and invocations with a pure heart and righteous behaviour.”

At the end of the meeting, the religious leaders present joined in an appeal, which was read by a young woman who recently fled Afghanistan.

“In front of the Colosseum, symbol of greatness but also of suffering, let us reaffirm with the strength of faith that the name of God is peace,” it said.