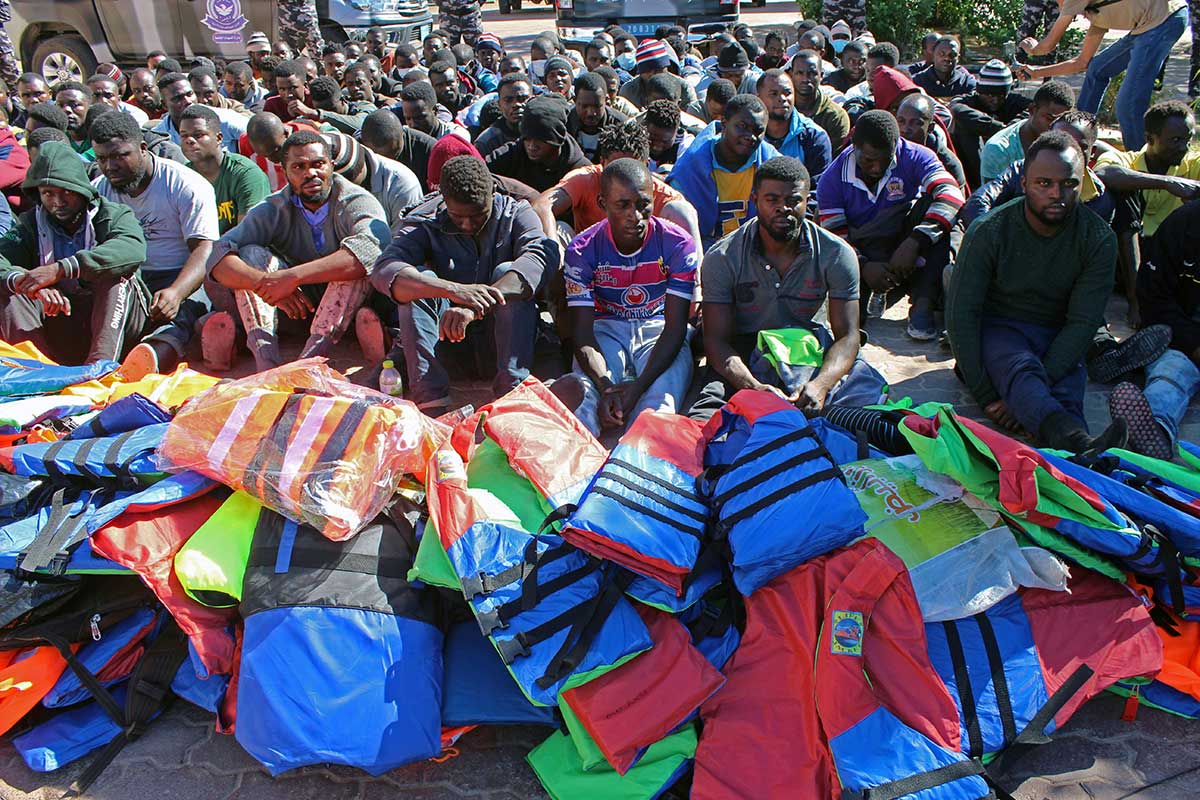 Migrants sit at a security checkpoint in Khoms, Libya, after they were intercepted by the Interior Ministry of Libya’s Government of National Accord, before attempting a journey to Europe in this Nov. 3, 2020, file photo. Pope Francis denounced the “inhuman violence” waged against migrants, refugees and other displaced peoples in Libya, and called for an end to sending people back to unsafe countries. (CNS photo/Ayman Al-Sahili, Reuters)

By Carol Glatz –  Pope Francis denounced the “inhuman violence” waged against migrants, refugees and other displaced peoples in Libya, and called for an end to sending people back to unsafe countries.

“Once again, I call on the international community to keep its promises to seek common, concrete and lasting solutions for the management of migratory flows in Libya and throughout the Mediterranean,” he said after praying the Angelus with visitors in St Peter’s Square Oct. 24.

“We must put an end to the return of migrants to unsafe countries and give priority to saving lives at sea, with rescue devices and predictable disembarkation, guaranteeing them decent living conditions, alternatives to detention, regular migration routes and access to asylum procedures,” he said.

The pope said that when people are turned away and forced back to Libya, they face real suffering because “there are real lagers there.”

The U.N. Refugee Agency, the UNHCR, recently called on the Libyan government to address the “dire situation” of asylum-seekers and refugees with a humane plan that respects their rights.

Authorities there conducted raids and arbitrary arrests in areas populated by refugees and asylum-seekers, resulting in several deaths, thousands of people detained and many homeless and destitute, according to the UNHCR Oct. 22.

Human Rights Watch and other rights activists have long criticised the extreme abuse waged against migrants by Libyan authorities.

However, it said the European Union, and Italy in particular, are complicit by financing and training the Libyan Coast Guard to intercept migrants in the Mediterranean as part of its “containment policy” to strictly limit migration into its borders.

By abdicating almost all responsibility for coordinating rescue operations at sea and by providing material and technical assistance to the Libyan forces, the EU and Italy contribute “significantly to the interception of migrants and asylum seekers and their subsequent detention in arbitrary, abusive detention in Libya,” Human Rights Watch said in a 2019 report.

The increased interceptions and detentions have led to deteriorating conditions in Libyan detention centres, including “severe overcrowding, unsanitary conditions, malnutrition and lack of adequate health care” as well as evidence of violent abuse by guards, it said.

“Enabling the Libyan Coast Guard to intercept people in international waters and return them to cruel, inhuman or degrading treatment in Libya can constitute aiding or assisting in the commission of serious human rights violations,” the Human Rights Watch report said.

In fact, an Italian ship’s captain was recently found guilty of violating international laws that forbid the forced return of people to countries where they are at risk.

Giuseppe Sotgiu, who had handed over 101 migrants to the Libyan coast guard after rescuing them in the Mediterranean Sea in 2018, was given a one-year jail term by an Italian court in mid-October.

In his appeal, Pope Francis said, “I express my closeness to the thousands of migrants, refugees and others in need of protection in Libya: I never forget you; I hear your cries and I pray for you.”

“Let us be aware of our responsibility for these brothers and sisters of ours, who have been victims of this very serious situation for too many years. Let us pray together for them in silence,” the pope said, as he led those gathered in the square in prayer.