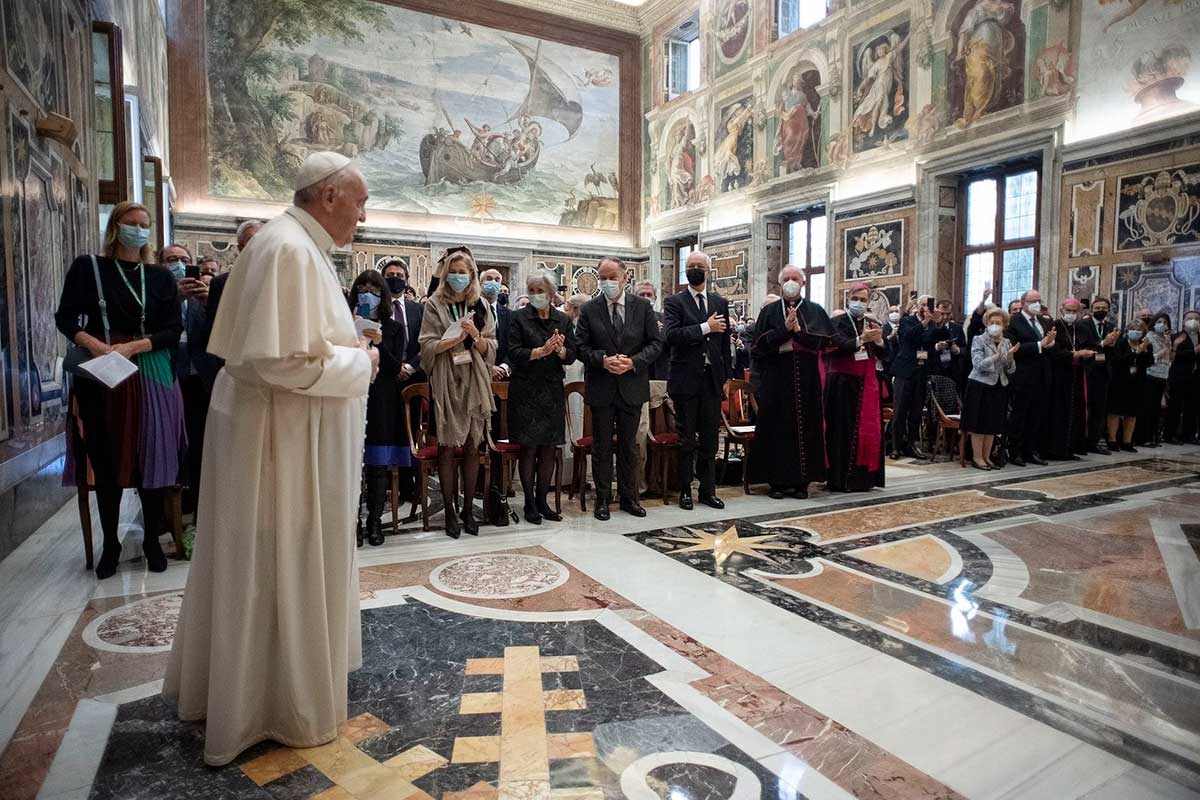 Pope Francis leads an audience with members of the Centesimus Annus Pro Pontifice Foundation at the Vatican on Oct. 23, 2021. The organisation promotes the social teaching of the Catholic Church, in particular the teaching in St John Paul II’s Encyclical “Centesimus Annus.” (CNS photo/Vatican Media)

By Junno Arocho Esteves – With many people around the world facing exclusion and inequality, the social teaching of the Catholic Church can inspire new economic systems that are more “people-centred,” Pope Francis said.

Christians must not “remain indifferent” to those affected by an “economic system that continues to discard people’s lives in the name of the god of money, fostering greed and destructive attitudes toward the resources of the earth and fueling various forms of injustice,” the pope said Oct. 23.

The pope addressed participants of an international conference sponsored by the Centesimus Annus Pro Pontifice Foundation. The two-day conference reflected on “Solidarity, Cooperation and Responsibility: The antidotes to fight injustices, inequalities and exclusions.”

Established in 1993, the foundation seeks to promote the teaching of St John Paul II’s 1991 encyclical Centesimus Annus on social and economic justice.

Pope Francis praised the foundation for its “commitment to financing study and research by young people on new models of economic and social development inspired by the church’s social doctrine.”

“This is important and greatly needed: in soil contaminated by the predominance of finance, we need to sow many small seeds that can bear fruit in an economy that is equitable and beneficial, humane and people-centred. We need possibilities able to become realities, and realities able to offer hope. This means putting into practice the social teaching of the church,” he said.

Reflecting on the conference’s theme, the pope said that solidarity, cooperation and responsibility represent the “three pillars of the church’s social teaching,” which places the human person at the centre of “the social, economic and political order.”

Rather than an individualistic world view, the church’s teaching is based on the word of God that “seeks to promote integral human development on the basis of our faith in the God who became man.”

“In every sphere of life, today more than ever, we are bound to witness our concern for others, to think not only of ourselves, and to commit ourselves freely to the development of a more just and equitable society where forms of selfishness and partisan interests do not prevail,” the pope said.

Pope Francis said Christians must be inspired by the teachings of Jesus and care for others with a “love that transcends borders and limits,” giving witness that “it is possible to pass beyond the walls of selfishness and personal and national interest.”

“We can be ‘brothers and sisters all,’ and so we can and must think and work as ‘brothers and sisters of all,'” he said. “This may seem to be an unrealistic utopia. But we prefer to believe that it is a dream that can come true. For it is the dream of the triune God. With his help, it is a dream that can begin to become reality, also in our world.”