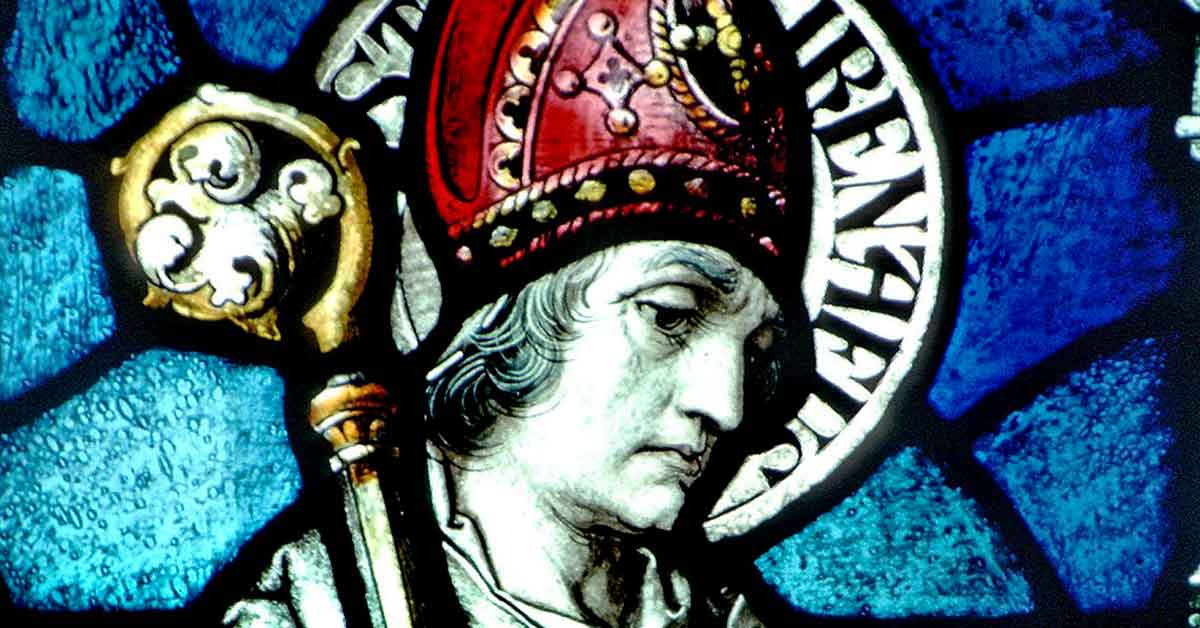 The likeness of St Irenaeus of Lyon is pictured in a stained-glass window at the Basilica of Our Lady Immaculate in Guelph, Ontario. During a meeting with members of the St Irenaeus Joint Orthodox-Catholic Working Group, Pope Francis said he will soon declare St Irenaeus a Doctor of the Church. (CNS photo/The Crosiers)

By Junno Arocho Esteves  –  Pope Francis said he intends to declare as a doctor of the church St Irenaeus of Lyon, the second-century theologian known for his defence of orthodoxy amid the rise of Gnostic sects.

During a meeting with members of the St. Irenaeus Joint Orthodox-Catholic Working Group, the pope praised the group’s efforts in creating a space for dialogue between Catholics and Orthodox Christians, much like their namesake.

“Your patron, St Irenaeus of Lyon – whom I will soon declare a doctor of the church with the title, ‘doctor unitatis’ (‘doctor of unity’) – came from the East, exercised his episcopal ministry in the West, and was a great spiritual and theological bridge between Eastern and Western Christians,” he said.

According to its website, the purpose of the St Irenaeus Joint Orthodox-Catholic Working Group is “to investigate the profound differences in mentality, ways of thinking and of doing theology which are related to current problems in Orthodox-Catholic dialogue, to understand their character, and to try to see how both traditions can enrich each other without losing their own identity.”

St Irenaeus, the group’s website said, “is revered as a patristic father in both the Eastern and Western churches” and “thus represents an example of the spiritual connection between the churches in East and West, which the working group seeks to promote through its discussions.”

Born in Smyrna, Asia Minor – now modern-day Turkey – St Irenaeus was known as a staunch defender of the faith.

Concerned about the rise of Gnostic sects within the early Christian church, he wrote: “Adversus haereses” (“Against Heresies”), a refutation of gnostic beliefs which emphasised personal spiritual knowledge over faith in Christian teachings and in ecclesiastical authority.

During their 2019 fall assembly, the U.S. bishops’ conference added their assent to a motion made by the Archdiocese of Lyon, France – the region where St Irenaeus ministered – to have the second-century bishop declared a doctor of the church.

Once declared, St Irenaeus would be the second doctor of the church named by Pope Francis after St Gregory of Narek, who was given the designation in 2015. He would bring the total number of doctors of the church to 37.

Tags: Doctor of the Church