The Faith In Purple Action 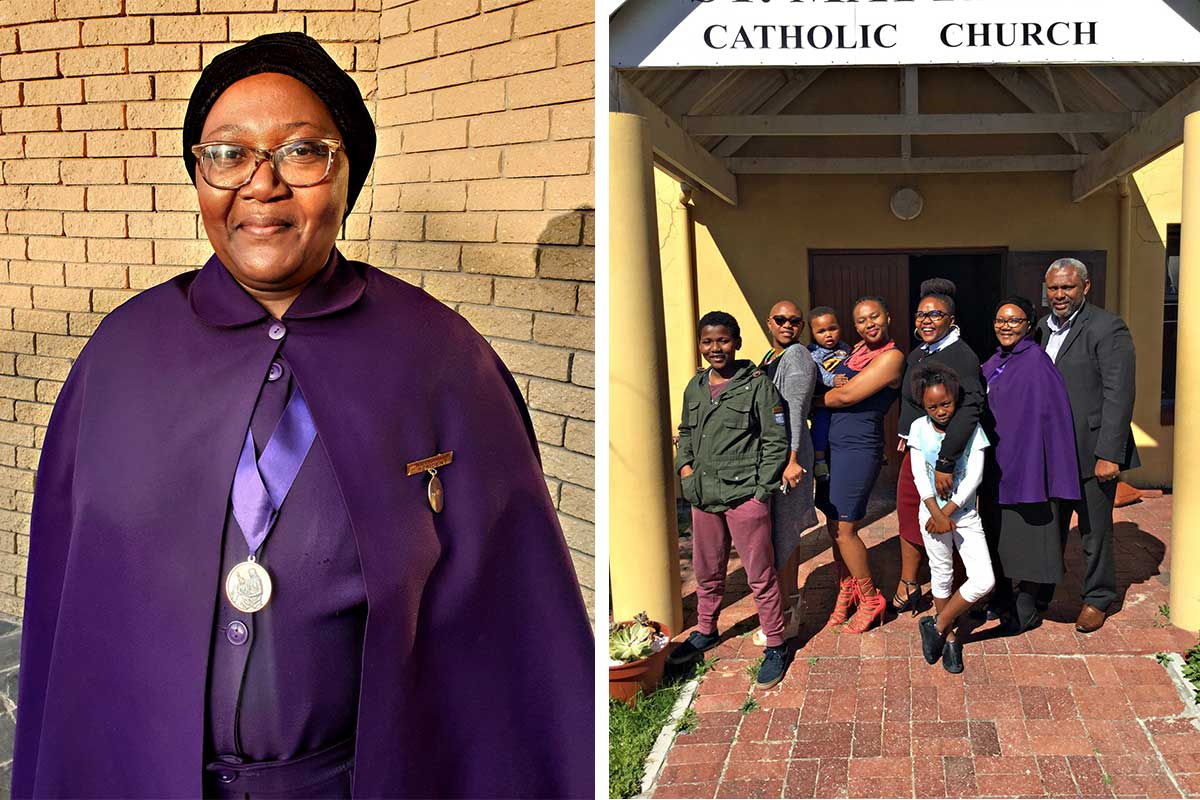 The members of the St Anne Sodality are known throughout SA for their purple-and-black uniforms. Daluxolo Moloantoa spoke to current president Sylvia Mbombo about her life, faith and the sodality.

Everybody knew. In the 1990s at Sunday Mass in St Matthias church in Mfuleni, Cape Town,  that the fourth row of the pews was reserved for the Mbombo family. They occupied the entire row.

“It was an exciting time for me. I was a new bride, and I was new to the Catholic Church. I had a burning desire to receive the body and the blood of Jesus Christ,” Sylvia Mbombo, national president of the St Anne Sodality, tells The Southern Cross.

Born the fourth in a family of five children, Mrs Mbombo grew up in Qoboqobo village near Centane, a small town about 30km east of Butterworth in the Eastern Cape. Her family were Protestants. “I knew God through the teachings of my mother, a dedicated church member and a woman of prayer. She instilled the values that formed the foundation of my life, such as kindness, compassion, empathy.”

Mrs Mbombo and her three sisters and one brother were raised by their mother. Their father, like most rural black men of his time, had to pack his bags and go to the big cities to find employment as a migrant labourer. The children would not see him, except perhaps for the December holiday season.

Sylvia attended primary school at Qoboqobo Junior Secondary School, and high school at Mabobothi Senior Secondary School. “This is where I met my loving husband,” she recalls. After her matriculation, she studied at the University of the Western Cape and graduated with a bachelor’s degree.

Mrs Mbombo joined the St Anne Sodality in 1999 at Mfuleni parish. She was later inducted as a member of the sodality at Queen of the Holy Rosary church in Knysna. “I was accepted into the sodality on July 28, 2001 — two days after the feast of St Anne. It was after an arduous but wonderful journey of two years in formation.”

Soon after her induction into the sodality, Mrs Mbombo plunged herself fully into its activities, rising through the ranks in subsequent years. She served as secretary in her parish (2004-06), as the deputy-secretary of the sodality in the archdiocese of Cape Town (2006-08), and diocesan secretary (2008-10). In 2010, she was elected national deputy president for a term, followed by two terms as national secretary from 2013-19. On April 27, 2019, Mrs Mbombo was elected the sodality’s national president at the special national council meeting in Johannesburg. “The occasion was extra special for me as it was also Freedom Day.”

Mrs Mbombo appreciates the milestones of her presidency of the sodality so far. It is a presidential term which has been clouded by the Covid-19 pandemic. She credits much of the far-reaching achievements in her presidency to the teamwork with the sodality’s national executive committee, alongside its chaplain, Redemptorist Father Bafana Hlatswayo.

Despite the pandemic, diocesan elections have been conducted successfully countrywide, and the operations and activities of the sodality have continued in all the dioceses. The sodality has given spiritual support to members and their loved ones affected by the pandemic. In spite of limited access, the sodality’s adoption of digital technology platforms has facilitated its effective communication at all levels.

On July 26, the sodality celebrated the feast of Ss Anne and Joachim, as it does annually. It was no different this year, but with adaptations, so as to accommodate the restrictions forced by the pandemic. The feast of the sodality’s patron “is an opportunity for us to renew our vows and our devotion to St Anne, the mother of Mary and wife of Joachim. It is also an opportunity for us to renew our promise to love and follow the example of our patron saint for the rest of our lives,” Mrs Mbombo says.

“This year, we intensified our prayers for the different needs of the family, the Church and the community, and for an end to the pandemic. We planned and executed a national programme of prayers and activities in this respect. We also used the opportunity to evaluate our various social programmes geared towards poverty alleviation, and combatting violence against women and children as well as  child malnutrition.” 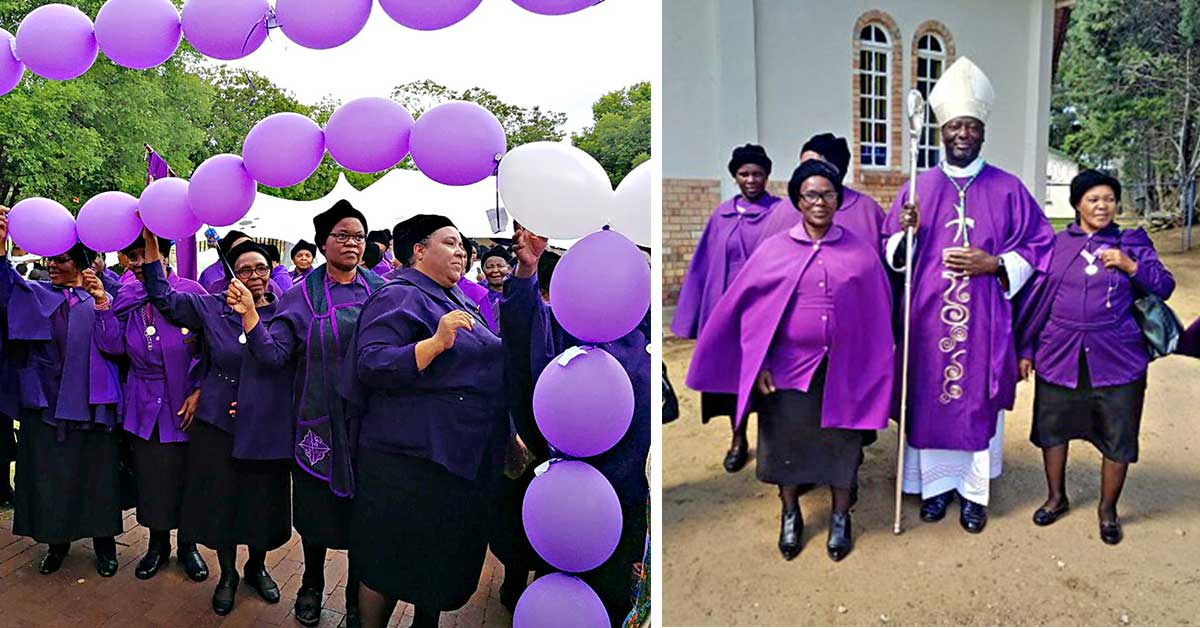 St Anne Sodality in Klasdorp and in Aliwal with Bishop Joseph Kizito.

A frequent question is why the St Anne Sodality admits only married women. “The answer is quite simple: our patron saint, St Anne, was married to Joachim, and they were the parents of the Virgin Mary. In order to emulate this woman, who is epitomised in Proverbs 31, the sodality was formed so that St Anne can be a model of love, concern, loyalty and care to every married Catholic woman,” Mrs Mbombo explains. “It thus makes sense that the sodality is open only to married women, as part of their families.

We must also remember that marriage in the Church is one of the seven sacraments, and the St Anne Sodality upholds this sacrament. We as members are called to defend the sacredness of life and holy matrimony.”

During its long history, the St Anne Sodality has had a reputation of comprising mostly women of a certain maturity, but today more and more younger women are joining its ranks. Mrs Mbombo attributes this welcome development to a number of factors. “The sodality does not invite members to join. However, most young women state that they joined because they saw the good work that’s being done by the sodality. Another reason is that young women nowadays are increasingly coming to terms with the fact that children learn good behaviour — or bad behaviour, for that matter — from observing their parents.

Young women in the Church have taken note of the good example set by members of the sodality in this respect, and they are responding to it.”

Furthermore, Mrs Mbombo says, “the need for spiritual fulfilment, deepening of their faith and being equipped to deal with life’s challenges have also contributed to young Catholic women’s desire to join our sodality.”

In his letter to the Corinthians, St Paul says: “There is one body but many parts” (Corinthians 12: 12-27). “This verse reminds us, as women, that we have many talents which can contribute to one big effort of making a difference in others’ lives. Our work as women is greater than we have ever had before. We need to embrace this fact, and actualise it through our duties in serving our families, our Church and our communities,” Mrs Mbombo says.

Looking forward, she sees a future anchored by a solid foundation built on shared trust, faith and confidence. “This is a time to take things into our own hands, with courage and unity,’’ she says. “We must remember that our God is the God of all hope. For this hope to be sustained, we need to stay connected to the eternal, limitless source of hope: God himself”.