100 years of the Legion of Mary 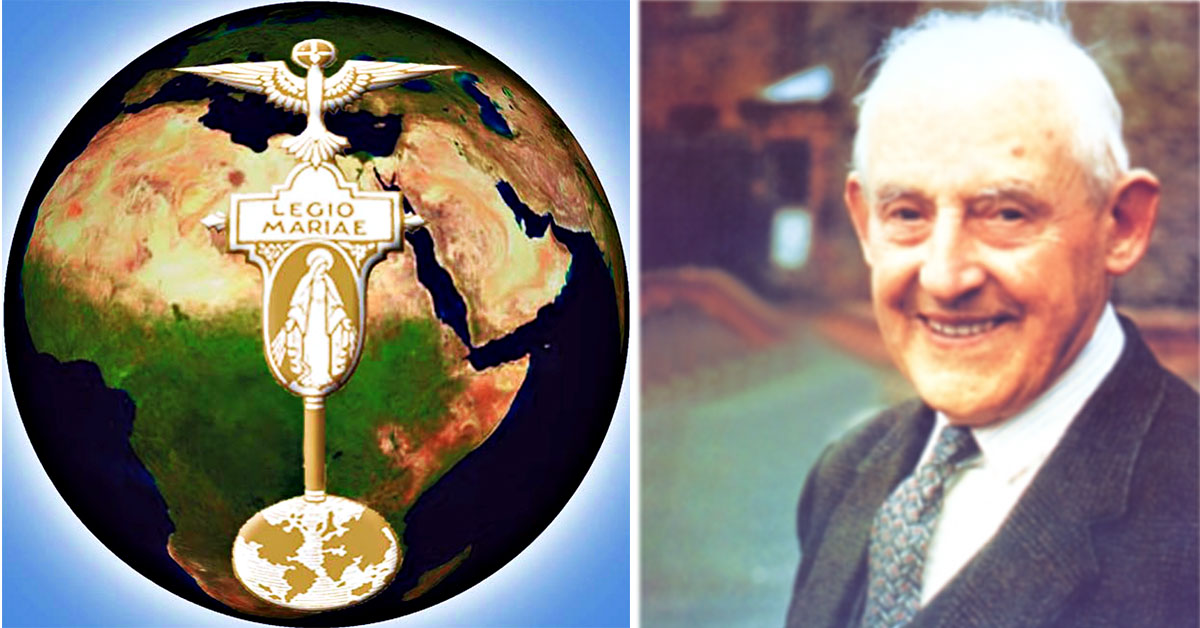 This year marks the centenary of the founding of the Legion of Mary. Maria Stevens & Christen Torres look at the great lay movement.

On September 7, it will be 100 years since an Irishman named Frank Duff co-founded the Legion of Mary. It would soon spread around the world, including South Africa, to become one of the greatest Catholic lay movements of the 20th century.

The Legion of Mary is a lay apostolic association of Catholics which, under the leadership of Mary Immaculate, serves the Church in about 170 countries with 10-14 million members, making it the largest apostolic organisation of lay people in the Catholic Church. It came to South Africa in 1933, starting in Port Elizabeth, and is now active in several dioceses.

The Legion’s activities aim to encourage Catholics in their sanctity, and to attract non-Catholics to the faith.

When Frank Duff co-founded the Legion of Mary on September 7, 1921, at St Nicholas of Myra parish in Dublin, he intended to help lay people to live their dedication to the Church in an organised structure which would be supported by fraternity and prayer. The group started out by visiting women with cancer in hospitals, but it soon spread its activities among the most destitute, including prostitutes.

Spread around the globe

The new organisation soon became very popular, and it spread across the world. Three people stood out in spreading the Legion: Frank Duff (1889-1980); Edel Quinn (1907-1944), who brought it to Africa in the 1930s, and Alfie Lambe (1932–1959), who promoted it in South America. Beatification causes for all three are underway.

But initially the Church authorities were suspicious of lay movements generally, so the Legion was mistrusted until Pope Pius XI publicly praised it in 1931. Even so, in Dublin, the Legion suffered obstruction from successive archbishops.

The Legion was established in South Africa by Dominican Sister Helena Raleigh, bringing to fruition the desire of Bishop Hugh MacSherry of Port Elizabeth. Irish-born Sr Helena was the prioress of Holy Rosary convent in Port Elizabeth. In a 1932 letter to Duff, she acknowledged the role of the organisation in her vocation. With the blessing of her parish priest, Fr Brassil, she inaugurated the Legion’s first meeting on September 8, 1933, with the praesidium — the basic unit of the Legion — dedicated to Our Lady of Victories. From Port Elizabeth the Legion spread quickly to other parts of South Africa. By 1934, a praesidium was founded in Johannesburg. More regions would follow.

In the Legion of Mary, a praesidium is normally based in a parish, with members meeting weekly. Each meeting includes a set series of prayers. Four additional levels supervise the work throughout the Legion’s structure. The highest level is the concilium, which is based in Dublin and has control over the Legion worldwide.

Any Catholic may join the Legion to serve God by practising the corporal and especially spiritual works of mercy. Full membership is preceded by a three-month probationary period.

There are two types of membership: Active and Auxiliary. Active members engage in spiritual exercises of prayer but are also engaged in the corporal apostolate of the Legion. Auxiliary members, the majority, support the Legion through their prayers.

The spirituality of the Legion of Mary is partly based on Louis de Montfort’s 1712 book True Devotion to Mary, which promotes a total dedication to Christ through devotion to the Blessed Virgin Mary. The Legion also promotes the adoration of the Holy Spirit, and the devotion to the Sacred Heart and the Miraculous Medal.

Who was Frank Duff?

Frank Duff was a pioneer of lay apostolates at a time when his own archbishop didn’t want to hear of them. But the founder of the Legion of Mary never gave up, fighting his mission with humility and determination. Tellingly, Duff secured an audience with Pope Pius XI long before Archbishop Edward Byrne of Dublin finally agreed to see him.

Born into a wealthy Dublin family on June 7, 1889, Duff had a special concern for the poor, and was a member of the Society of St Vincent de Paul. A civil servant by profession, Duff and a group of women set up the Legion of Mary on September 7, 1921, to help ill and poor women. He was adamant that single mothers must be helped, and that nobody should take their children away from them — an attitude that was not shared by much of the Irish Church, society or state, with terrible consequences.

Soon the Legion opened up to men as well, and spread rapidly all over the world. Duff remained involved in guiding the Legion until his death at 91 on November 7, 1980. The Legion of Mary is said to be the largest international association to have been founded in Ireland.

The lifelong bachelor was also a keen writer of booklets. Perhaps the most famous one is Can We Be Saints? published in 1916. In it, Duff insists: “Every person that is born is called to be a saint. Take it as most certain that you — no matter how unfitted your life may seem for holiness — are being given graces sufficient, if corresponded with, to bring you to sanctity.”

One day Duff may become a canonised saint: his sainthood cause was introduced in 1996.