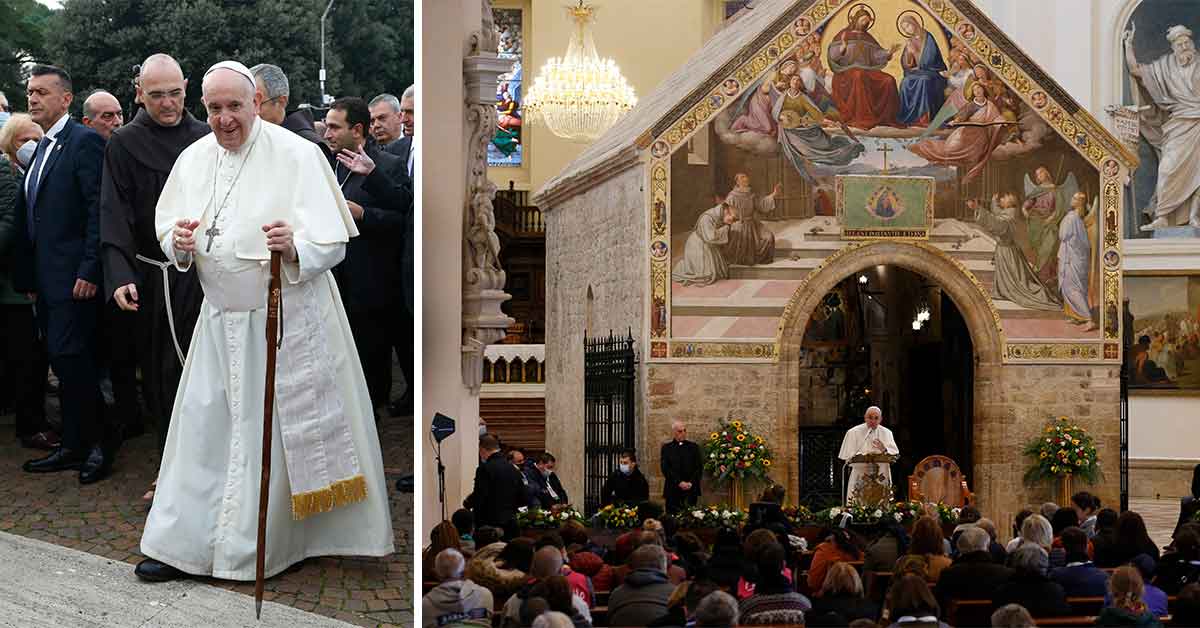 By Cindy Wooden –  With a pilgrim’s staff and mantle, Pope Francis entered Assisi’s Basilica of St Mary of the Angels with 500 economically or socially disadvantaged people and the volunteers who walk alongside them.

The pope’s pilgrimage to Assisi on November 12 was dedicated totally to the poor in preparation for the celebration on November 14 of the World Day of the Poor.

A France-based charity, Fratello, brought 200 poor pilgrims from France, Poland, Croatia, Switzerland and Spain. The Jesuit Refugee Service’s Centro Astalli brought refugees from Congo, Angola and Nigeria. The Community of Sant’Egidio brought the residents of a shelter for the homeless located just outside St. Peter’s Square at the Vatican. And Italian diocesan Caritas volunteers brought hundreds of the people they work with each day.

Six of them shared their stories with Pope Francis – stories of crime and prison or of drugs and alcohol, stories of being forced to flee their homeland or living on the street, but especially stories of steadfast or newfound faith, of finding a helping hand and of learning to see the face of Christ in the poor.

The crowd kept applauding to encourage Sebastián, a Spaniard, as he struggled with sobs to tell his story of drug addiction and prison. He said he was convinced “that my sins could not be forgiven because I had done so much evil” until he met a priest, who introduced him to the charismatic renewal movement.

Qadery Abdul Razaq, an older Afghan refugee who had worked with the Italian army, thanked the government for getting him and his wife to safety and Caritas for providing housing and food and help with their resettlement.

But, he said, “we thank them most of all for treating us like their parents and not like children.”

His voice, like Sebastián’s, broke as he pleaded with the pope and the Italian government to help get his adult children to Italy as well.

Marianna, 43, a Romanian widow, told the pope she came to Italy in search of work but became ill and now relies on her children and, often, Caritas for what she needs.

“Even before praying to God to give me health, I ask him to give me the strength to keep going,” she said.

Pope Francis embraced each of those who shared their stories and thanked all of the poor for “this experience of encounter and of faith.”

He also thanked retired French Cardinal Philippe Barbarin of Lyon, who accompanied the French pilgrims. The cardinal was given a six-month suspended sentence in March 2019 for failing to report abuse by a notorious priest but was cleared of criminal liability on appeal.

Asking forgiveness of the cardinal for drawing attention to him, Pope Francis told the congregation: “He is among the poor. He, too, endured with dignity the experience of poverty, abandonment, mistrust. And he defended himself with silence and with prayer. Thank you, Cardinal Barbarin, for your witness.”

The Basilica of St Mary of the Angels is built around the Portiuncula, the small chapel where, Pope Francis explained, “St Francis welcomed St Clare, the first brothers and many poor people who came to him.”

“He received them simply as brothers and sisters, sharing everything with them,” the pope said. “This is the most evangelical expression we are called to make our own: hospitality,” which means opening the door, “the door of our house and the door of our heart, and to allow the person who knocks to come in and feel welcomed, not ashamed.”

“An open heart and outstretched hand” is always the first step in creating a true encounter, he said. It also is the way to experience the truth that “every one of us needs the other, and that even weakness, if experienced together, can become a strength that will make the world better.”

If people don’t learn how to encounter each other with sincerity, he said, “we’ll move toward a very sad end.”

For too many people, the presence of the poor in their cities is “an annoyance,” he said. “Sometimes we hear it said that those responsible for poverty are the poor – an added insult!”

“So as not to carry out a serious examination of conscience on one’s own actions, on the injustice of certain laws and economic measures, on the hypocrisy of those who want to enrich themselves excessively, blame is laid at the feet of those who are weakest,” Pope Francis said.

“It is time for the poor to be given back their voice,” he said.

“It is time for eyes to be opened to see the state of inequality in which many families live,” the pope insisted. “It is time for sleeves to be rolled up so dignity can be restored by creating jobs.

“It is time to be scandalised once again before the reality of children who are starving, reduced to slavery, tossed about in the water in the aftermath of a shipwreck, innocent victims of every sort of violence,” the pope said. “It is time that violence against women cease and that they be respected and not treated like bargaining chips.”

“It is time for the circle of indifference to be broken so as to discover once again the beauty of encounter and dialogue,” Pope Francis said.

Before leading the poor in prayer, the pope thanked them for all the effort they expend to survive.

“To hold out” or hold on “is not a passive action” he said. It takes courage, strength and persistence in finding “reasons for not giving up when confronted with difficulties, knowing that we do not experience them alone but together, and that only together can we overcome them.”