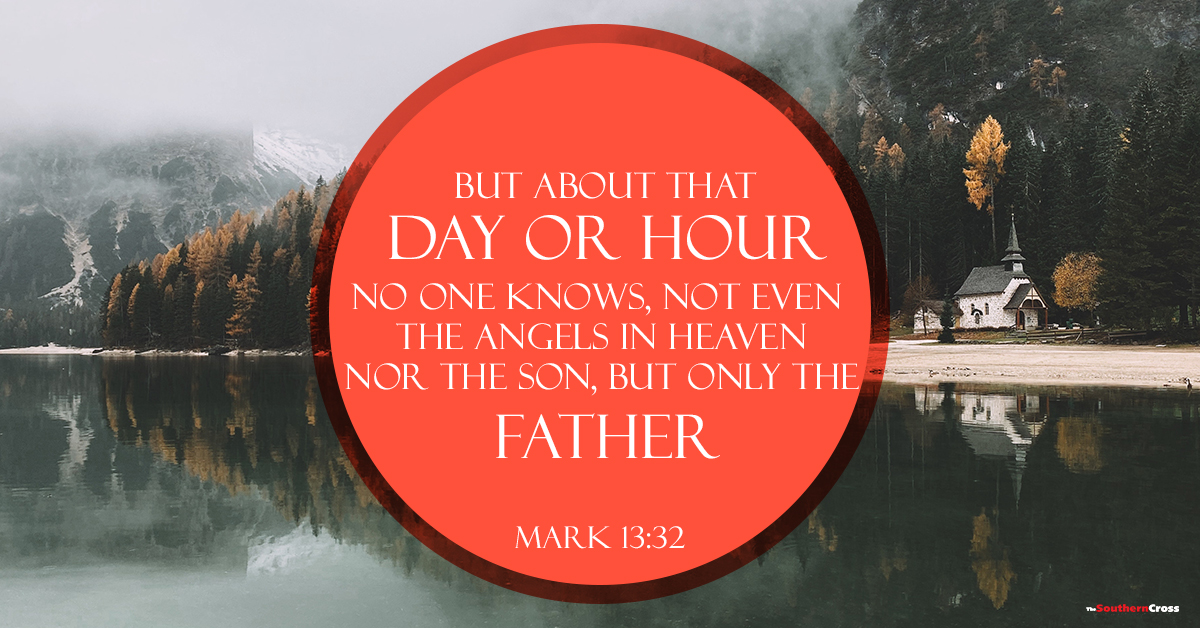 Point of Reflection: Liturgically, this Sunday brings to an end the cycle of the Scriptural readings for the ordinary time in year B. It paves the way for next Sunday’s celebration of Christ the King with its own proper Scriptural readings. The focus today rests on the glorification of Jesus Christ, and his return at the end of time as the saviour of his faithful, the one who will rule as the King forever.

Sermon (Reflection): Both the First Scriptural reading and the Gospel of today presents the apocalyptic literature. The word “apocalyptic” refers to the type of biblical writings that describe the conclusion of human history, popularly, though inadequately, called “the end of the world”. Apocalyptic writing is known for its extensive use of symbols and highly imaginative pictures, such as cosmic disasters, plagues, scenes of judgment and destruction, and appearances of otherworldly beings such as dragons, beasts, angels and other mysterious figures. These images are all symbols and signs that indicate that the world, as we know it now, will one day dramatically change.

It will be transformed into a new world, a new reality re-created by God. The best examples of apocalyptic writing are the books of Daniel and Revelation. However, there are numerous other passages of this type in the Bible, including the Gospels.

Today’s first Scriptural reading is the short passage which presents the scene of the final judgment. Michael, one of the seven archangels, is the guardian angel of the Jewish nation. He represents the people before God, and carries out God’s commands. At the time of greatest anguish, the time of most severe persecutions, God will send Michel to decisively put an end to all evil, and to execute God’s judgment. This judgment will begin with the resurrection of the dead, who will be divided into two groups. The unrighteous will be separated from the righteous, and will suffer eternal disgrace. The righteous, on the other hand, will join the heavenly world, and become like shining stars, which means that they will reside among angels and become like them.

The first reading and the Gospel emphasize that the world as we know it will one day come to an end. A new world will emerge, and evil will be forever erased. At that time, those who belong to Jesus will begin an entirely new existence. Salvation means nothing else but the beginning of this new life of “being with the Lord forever” (Cf. 1 Tim 4:17).

The Gospel reading comes from an apocalyptic chapter present in Mark. The first part of the text describes the end of the present world and the return of Christ, known as parousia.

The end of the world is presented as a frightening destruction of the universe—darkening of sun and moon, stars falling from the sky and shattering on the earth. These images portray the return of creation to chaos, implying that the present and passing world must be unravelled before God creates it anew.

This re-creation begins with the return of Jesus, described as the coming of the Son of Man in clouds with great power and glory. This image comes directly from Daniel 7:13. Jesus fulfils Daniel’s vision by returning to the earth, and sending his angels to gather the faithful to himself. This scene beautiful portrays salvation as the reunification of believers with Christ.

The second part of the Gospel reading answers the question about the timing of Jesus’ return. It begins with the phrase, “after that suffering”, referring to events described in the preceding verses (Mark 13:5-23). There, Jesus extensively described various natural and man-made disasters, such as wars, famines, and earthquakes, followed by severe persecutions of his disciples. These signs have occurred and continue to occur in every period of human history, until today.

When Jesus spoke of the fig tree sprouting its leaves as summer approaches, he meant that the signs that indicate the nearness of his coming are all already visible. The end of the world and Jesus’ return can happen at any moment. This is confirmed by the statement, “this generation will not pass away until all these things have taken place”. The word “generation” here refers to believers living on earth between Jesus’ death and his return at the end of time.

The exact time of Jesus’ return is known only to God. Stating that no one in the entire creation knows this time, Jesus emphasises that God alone has the authority to decide when the end of the present world occurs. Consequently, believers must be constantly prepared for this unexpected event.

After offering himself, Jesus was enthroned on God’s right hand where he waits until all powers in the universe will be subjected to him. This means that sin and evil are still rampant in the world and beyond it. However, since Jesus’ final and ultimate victory over all evil was already won on the cross, all that remains is to await the time when that victory bears its full fruit. This will happen when Christ returns at the end of history.

The immediate effect of Jesus’ sacrifice on the faithful still living in the world, surrounded by evil and affected by sin, is that Jesus “perfected” those who are “sanctified”, or the “holy ones”. Believers are holy because they are united with the Holy God through Jesus. Perfection, in the Bible, means completeness and wholeness. On the cross, Jesus purged the people from their sins, thus removing the main obstacle which separated them from the Holy One. Thus, those who are united with Jesus through faith are now “complete”—they have regained the integrity which the first people enjoyed when God created them, and which they enjoyed prior to the first sin and fall.

Faith in Christ has a healing effect, making the person complete again, and capable of union with God. Jesus’ one-time self-sacrifice brought forgiveness and perfection to believers still living in this world. This sacrifice supplanted and removed the need for any other sacrifices.

Christian Act in Word of God “We are saved by Christ”

Almost all Christians, desperately want to know the date of “the end of the world”.

Today’s Gospel reading explicitly and forcefully states that no one knows when the end will occur, even Jesus himself. How could any honest human being claim to know more than Jesus? Unless, of course, such an individual has malicious intentions, or is mentally disturbed.

We cannot know when Jesus will return. However, this does not mean we can forget about it. Even if he does not come in our lifetime, we still rise to meet him after our death. Therefore, Jesus insists that we must prepare for this encounter.

One of the best instructions on how to prepare for meeting Jesus is found in Matthew chapter 25 which contains two great parables, one about the use of talents, and one about the last judgment. In the first parable Jesus teaches us that we must prepare ourselves for meeting him in eternity, by using the talents and gifts we have been given.

Unlike many of the doomsday preachers, Jesus never said that we should join a sect strictly separated from the rest of society, and passively wait for his return. On the contrary, we have been given talents, and time, in order to grow and develop in every possible way. The second parable describes the last judgement itself. It presents Jesus identifying himself with his fellow human beings.

By saying, “just as you did it to one of the least of these … you did it to me”, he means that we prepare to meet him by mutual care for one another. Acts of charity, whether material or spiritual, lead us to encounter Jesus in this world so that he might recognize us as his own when we meet him in heaven.

Many of us are very frightened by the prospect of death and judgment. Most prefer not to think about it. But these events are certain to occur. We would be wise to prepare for them well in advance, so that we can face them with confidence and without fear. Our death is the end of the world as we know it. However, Jesus prepared us in every possible way to see and live beyond death. To even begin this preparation, we must acknowledge that the life we will have beyond death, is determined by the type of life we live now. When in this life we cling to Jesus, and serve him in others, our future will also be life in his presence.

Action: I will focus on living righteous life by following Christ commands.

Prayer: Lord our God, in your goodness you created us for eternal life in your presence. We thank you for this supreme gift which you have offered us and made possible through the self-sacrifice of your Son. We pray for wisdom and guidance so that we may not squander this gift but reach salvation. Offer us your forgiveness when we fail, and your strength to cling to your Son, our Lord and Saviour. Amen.