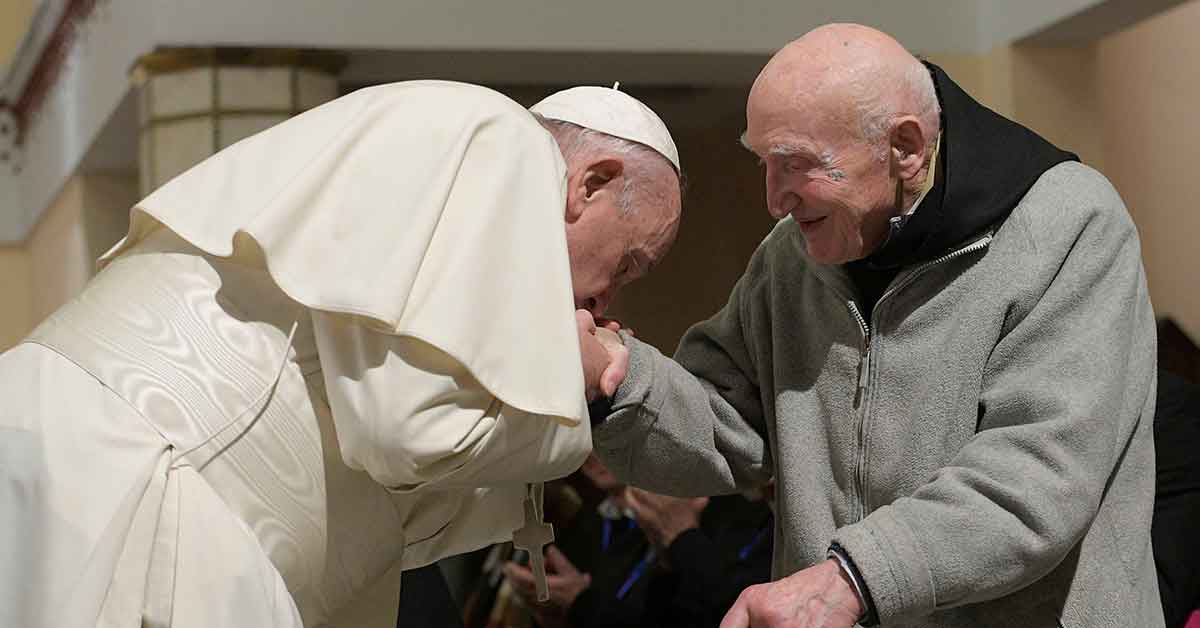 Trappist Father Jean-Pierre Schumacher, the last survivor of the 1996 massacre in Tibhirine, Algeria, died November 21, 2021, at the age of 97. In this photo, Pope Francis kisses Father Schumacher’s hand during a meeting at the cathedral in Rabat, Morocco, March 31, 2019. (CNS photo/Vatican Media)

By Junno Arocho Esteves – Trappist Father Jean-Pierre Schumacher, the last survivor of the 1996 attack on the Tibhirine monastery in Algeria, died at the age of 97.

In a message released November 21, the Trappist community of Midelt, Morocco, said Father Schumacher died shortly after receiving the anointing of the sick at the start of a Mass for the feast of Christ of the King.

“Ten minutes later, he gave his soul to the Lord. He left in peace, as he has been all his life,” the statement said.

Born in 1924, Father Schumacher first joined the Marist Fathers. After his ordination in 1953, he joined a Trappist monastery in his native France. In 1964, he was sent to the Monastery of Notre Dame de l’Atlas in Tibhirine, Algeria.

Father Schumacher, along with another Trappist monk – Father Amédée Noto – were the only survivors of a massacre when seven Trappist monks at the Algerian monastery were murdered by members of the Armed Islamic Group.

The seven Trappist monks were beatified in 2018 along with 12 other martyrs who were killed between 1993 and 1996, while Algeria was locked in a 10-year armed conflict between government forces and extremist Islamic rebel groups.

In an interview with Avvenire, the Italian bishops’ daily newspaper, published on the eve of the beatification, Father Schumacher said he survived the attack because he was carrying out duties in a porter’s lodge located outside the monastery.

“I heard noises. I thought they had come to take the medicine, as it had happened before. Then when silence returned, someone knocked on my door. I was a little scared, then I opened. It was (Father) Amédée, who told me, ‘They took our brothers away. We are all alone, you and I,'” he said.

The Trappist monk told Avvenire that he always wondered why he and Father Amédée survived the attack and whether God had considered “me worthy enough” to die with his fellow monks.

He said he was consoled later after receiving a letter from the abbess of a cloistered convent in Switzerland who told him that “the Lord wanted them to give their testimony of love with death (while) others are left to continue to transmit the message of love with life.”

“It made me think a lot,” he said. “I don’t know if I really answered that calling. But I have tried to all my monastic life which has now lasted for over 50 years.”

During his 2019 visit to Morocco, Pope Francis met with Father Schumacher and kissed his hands at a meeting with priests, religious men and women and members of the ecumenical Council of Churches at St. Peter’s Cathedral in Rabat.