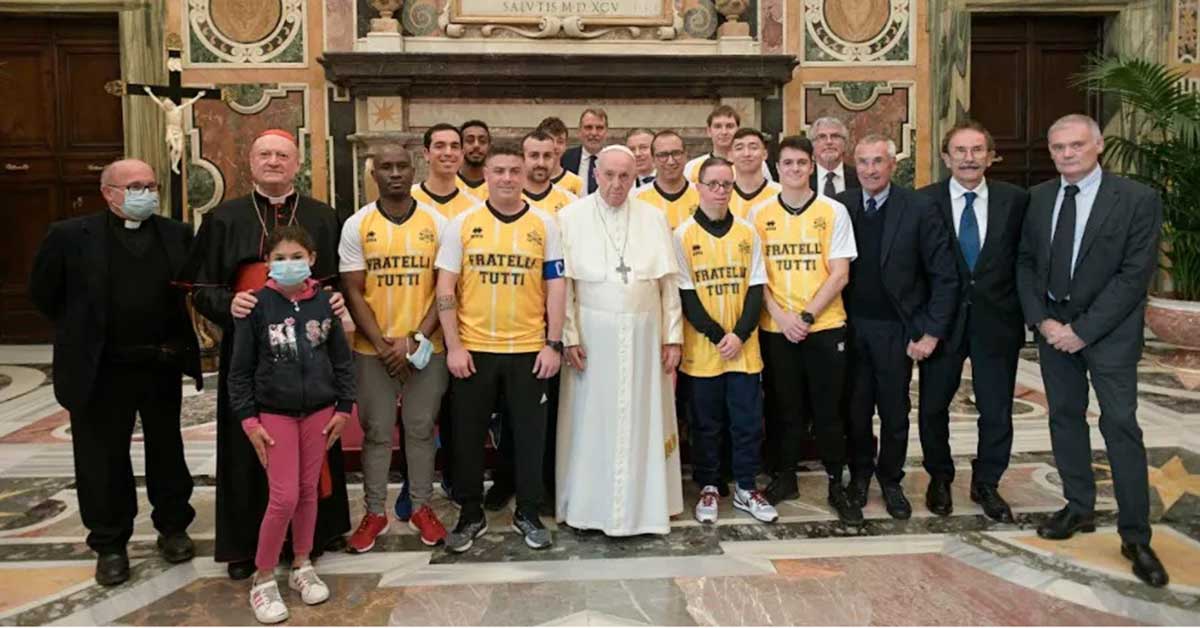 Pope Francis met with members of a soccer squad known as the “Pope’s Team – Fratelli tutti” ahead of a friendly match yesterday.

Meeting the players and their opponents on Nov. 20, the pope said that he had joyfully welcomed a proposal for a game involving a papal team.

The team, he joked, does not consist of cardinals — who range in age from 54 to 97. Instead, the players include Swiss Guards, priests working in the Roman Curia, and Vatican employees and their children.

The pope explained that the squad — which will sport football jerseys bearing the name of the pope’s most recent encyclical — also features a young player with Down syndrome, a participant in the Special Olympics, and three migrants.

He said that the migrants were welcomed to Italy by the Community of Sant’Egidio after “a journey marked by abuse and violence, which saw them pass from the Greek camp of Lesbos,” where the pope will travel next month.

“Thank you all for accepting to be part of the ‘Pope’s Team,’” he said. “It is a team where there are no barriers and that makes inclusion a simple normality.”

Emphasising the match’s friendly nature, he then turned to the team’s opponents, representing the World Rom Organisation, which promotes the welfare of the Roma people.

The Roma, also known as the Romani people, are a traditionally nomadic group originating from the Indian subcontinent. There are an estimated 12 million Roma in Europe, around two-thirds of whom live in central and eastern European countries.

“Dear Roma friends, I know well your history, your reality, your fears, and your hopes,” he said, looking forward to future events organized by the Diocese of Rome through a project called “A kick to exclusion.”

“Last Sept. 14 in Košice, Slovakia, I visited the Roma community. I invited them to move from prejudice to dialogue, from isolation to integration,” he said.

“After listening to the testimonies of some members of the community — stories of pain, redemption, and hope — I reminded everyone that to be Church is ‘to live as a people called by God, each with his or her special role to play, all as members of the same team.’”

“I used precisely these expressions, taken from the language of soccer, which also fit very well with the meaning of your game.”

He went on: “Too many times, I told the Roma people of Košice, the Roma have ‘been the object of prejudice and harsh judgements, discriminatory stereotypes, defamatory words, and gestures. As a result, we are all poorer in humanity.’”

“For this reason, the sporting event to which you will give life has great significance: it indicates that the way to peaceful coexistence is integration. And the basis is the education of children.”

The soccer match, organised by the Pontifical Council for Culture, will be played on Nov. 21, in the town of Formello, 45 minutes north of Italy’s capital.

The match, on the training grounds of Italy’s Lazio football club, will also raise funds for a Roma inclusion project organised by the Diocese of Rome.

In his address, the pope noted that the World Rom Organisation, which has its headquarters in Zagreb, Croatia, runs inclusive sporting events with special attention to minorities and people with disabilities.

He described the group’s activities as a sign of hope.

“Children, all children, have the right to grow up together, without obstacles and without discrimination. And sports are a place of meeting and equality, and can build community through bridges of friendship,” he said.