Pope: The Lonely Can Find a Friend in St Joseph 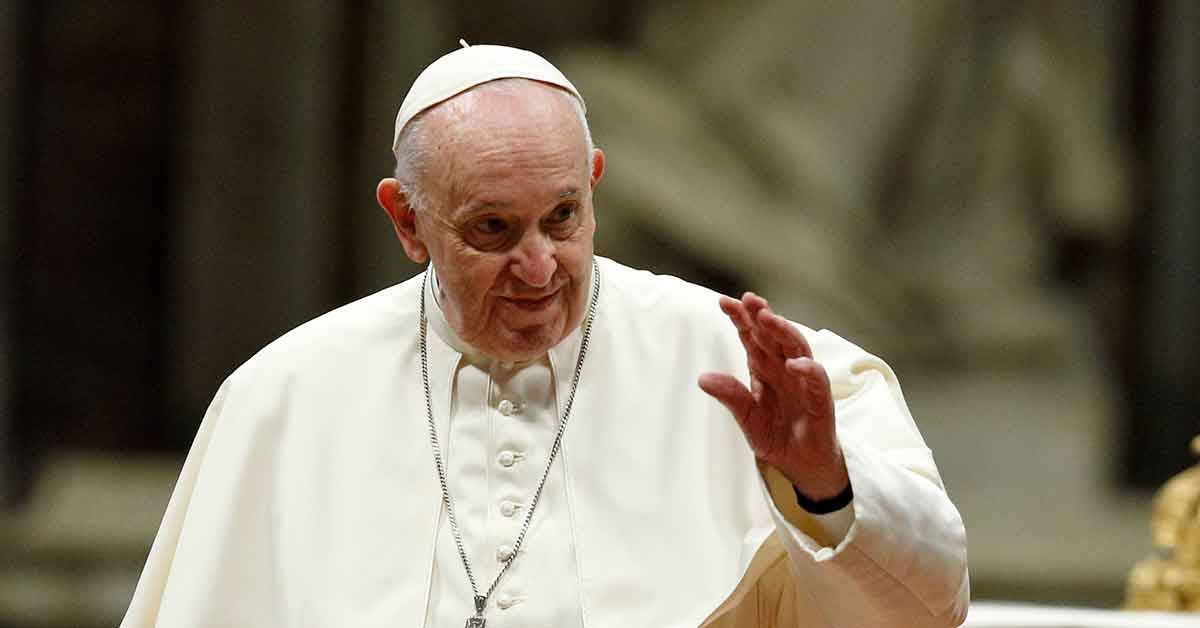 Pope Francis greets people as he leads the first part of his general audience in St. Peter’s Basilica at the Vatican Nov. 24, 2021. (CNS photo/Paul Haring)

By Junno Arocho Esteves – As the guardian of Jesus and Mary, St. Joseph’s reassuring presence is an example for Christians who are called to care for the lonely and those who struggle in their lives, Pope Francis said.

In a society where relationships are constantly in flux, St. Joseph’s life and example give “a clear indication of the importance of human bonds,” the pope said during his weekly general audience Nov. 24.

“Joseph, with his life, seems to want to tell us that we are always called to feel that we are the guardians of our brothers and sisters, the custodians of those placed close to us, of those whom the Lord entrusts to us through the circumstances of life,” he said.

Before the general audience, the pope went to St. Peter’s Basilica to meet with several large groups of pilgrims unable to enter the Paul VI audience hall due to their numbers, including a group led by the Vincentian Fathers who were in Rome to commemorate the feast of Our Lady of the Miraculous Medal.

According to a communique released by the Vincentians, the meeting was the “culmination and the continuation” of a yearlong Italian pilgrimage with a statue of Mary the pope blessed last year to mark the 190th anniversary of the Marian apparitions to St Catherine Labouré.

It was during the second apparition, in November 1830, that St. Catherine said Mary told her to make medals of the image she was seeing – Mary, standing on a globe, with the words “O Mary, conceived without sin, pray for us who have recourse to you” written as an oval frame around her.

The pope also welcomed pilgrims from the St. John Paul II Association and the Italian Association for Victims of Violence before making his way to the audience hall.

At the audience, Pope Francis continued his new series of talks on St Joseph, reflecting on his role in the history of salvation.

Recalling St. Matthew’s compilation of Jesus’ genealogy, the pope said that although St Joseph is not Jesus’ biological father, he is still “the father of Jesus” and “is in fact a central element in the history of salvation.”

“Everyone can find in St. Joseph – the man who goes unnoticed, the man of daily, discreet and hidden presence – an intercessor, a support and a guide in times of difficulty,” the pope said. “He reminds us that all those who are seemingly hidden or in the ‘second row’ have unparalleled agency in the history of salvation.”

While St. Luke described St. Joseph as the “guardian of Jesus and Mary,” the pope said his protection extends to the whole church and is a reminder for Christians “that our lives are made up of bonds that precede and accompany us.”

Before concluding his talk, Pope Francis led those present in praying that those who “lack the strength and courage to go on” in their lives may find in St. Joseph “an ally, a friend and a support.”

Saint Joseph,
you who guarded the bond with Mary and Jesus,
help us to care for the relationships in our lives.
May no one experience that sense of abandonment
that comes from loneliness.
Let each of us be reconciled with our own history,
with those who have gone before,
and recognise even in the mistakes made
a way through which Providence has made its way,
and evil did not have the last word.
Show yourself to be a friend to those who struggle the most,
and as you supported Mary and Jesus in difficult times,
support us too on our journey. Amen.