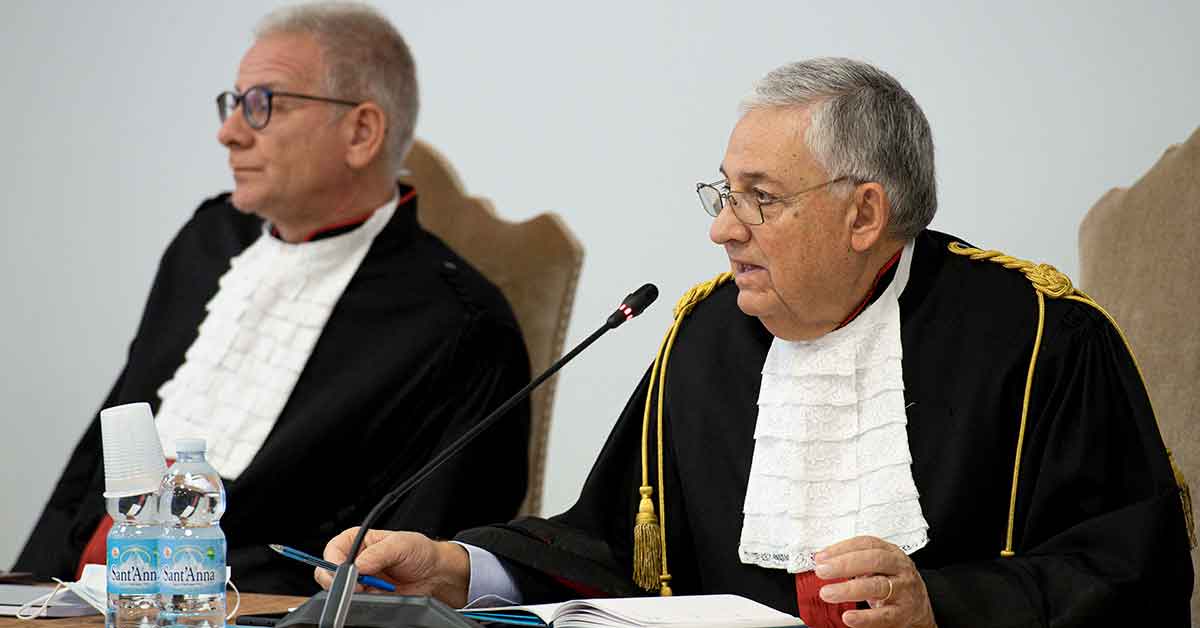 Vatican Judge Venerando Marano listens as the president of the Vatican City State tribunal, Giuseppe Pignatone, speaks during the third session of the trial of six defendants accused of financial crimes, including Cardinal Angelo Becciu, at the Vatican City State criminal court on Nov. 17, 2021. Lawyers representing the defendants argued that Vatican prosecutors omitted evidence and testimony they said are crucial in preparing their defence. (CNS photo/Vatican Media)

By Junno Arocho Esteves – At the ongoing Vatican trial involving alleged embezzlement, money laundering and abuse of office, the defence has raised more questions about the prosecution’s handling of the investigation into the Vatican’s questionable majority share purchase of a London property.

Since the start of the trial in July, defence lawyers have consistently argued that the case should be thrown out, particularly due to the prosecution’s alleged tampering of the video testimony of Mgr Alberto Perlasca, the former head of the Secretariat of State’s administrative office and former suspect.

Furthermore, at the trial’s fourth session on Nov. 17, Luigi Panella, the lawyer representing Italian investment manager Enrico Crasso, argued that conversations between the prosecution and Pope Francis regarding the case should be included in the evidence.

Panella said that in one video clip, Mgr Perlasca seemed to be “shocked” when prosecutors countered one of his statements with a comment made by the pope regarding the investigation.

Vatican deputy prosecutor Alessandro Diddi told the court that he was not referring to a private conversation with Pope Francis but rather the pope’s comments during a news conference aboard the papal flight from Japan in November 2019.

However, the transcript of an interrogation that took place in late April 2020 – shared with journalists by Panella – paints a slightly different picture.

During the interrogation, Diddi pushed back against Mgr Perlasca’s claim that the pope approved of negotiations with Gianluigi Torzi, an Italian broker who served as the middleman in the Vatican’s exit of the London property deal.

Torzi faces several charges, including the extortion of $17 million from the Vatican as payment for the majority stake and his role in brokering the deal.

According to the transcript, Diddi told Mgr Perlasca that the pope never authorised the negotiation with Torzi and that before investigating, the prosecution “went to the Holy Father and asked him what happened.”

“This story that the Holy Father told someone to negotiate (with Torzi) is neither in the heavens nor on Earth, and, fortunately, the documents converge toward this conclusion. And to claim that there was a negotiation with Torzi because the Holy Father told you to really screams of vendetta,” the transcript quotes Diddi as telling the monsignor.

Prosecutors denied the claim and said that most gaps in Mgr Perlasca’s testimony were due to inconsequential reasons, such as lunch or bathroom breaks.

However, Panella told the court that a report from a technical expert who reviewed the testimony found that metadata for some of the video files was missing. Furthermore, the metadata that was included showed that at least one hour of Mgr Perlasca’s testimony was cut.

The judges, led by Giuseppe Pignatone, president of the Vatican City State criminal court, will decide on Dec. 1 on the defence lawyers’ request to dismiss the indictment.