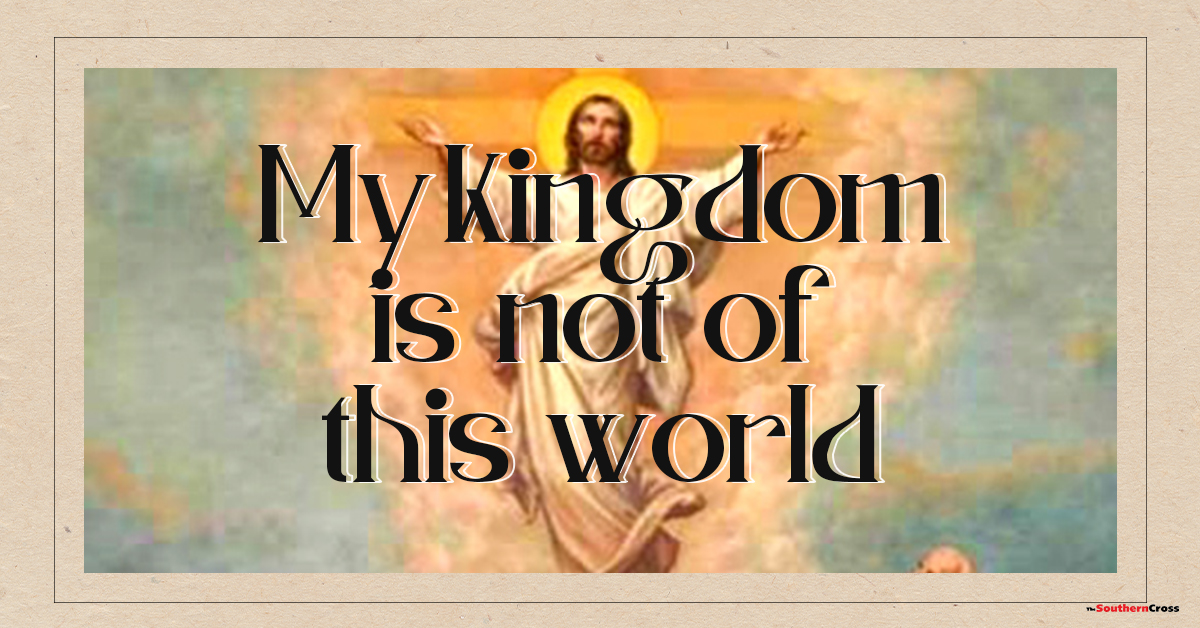 Point of Reflection: The solemnity of Christ the King concludes the Liturgical Year. Kingship is usually associated with such images as the crown, sceptre, throne, palace, fortress, abundant wealth, power, prestige, army and servants. Earthly kings pursue all these. But what kind of a king is Jesus, who enjoyed none of these privileges, and how does his rule manifests itself? Today’s readings provide some answers to these questions.

Sermon (Reflection): Many of us aspire to positions of leadership. Ambition and the search for authority and power drive many people, regardless of their age and gender. There is nothing wrong with seeking leadership. But we must be careful about the motives and ideas we hold about leadership. Such questions as “why do I want to lead others?”, and “what do I hope to accomplish through my leadership?” have to be continuously asked.

With leadership comes great responsibility for shaping the lives of others. Today’s celebration of Christ the King must be a moment of reflecting what kind of leader (kings) we have in our societies and communities. The Biblical readings of today elucidate what kind of King we need to faithfully live our Christian life.

Who is the king we honour and follow as Christians? Today’s liturgy answers that question in a very clear and unambiguous manner. Our king is one who exercised his power and leadership for the sole purpose of bringing his people liberation and salvation. He does not rule by simply demanding that his followers obey his commands. Rather, he himself carried out the work of our redemption. It was a costly mission. He paid the price of privation, humiliation and eventual execution. From a purely human point of view, Jesus life was a failure. He had only a few disciples who eventually abandoned him. His teachings and deeds were criticized and rejected. He died alone with the mocking inscription over his head that declared him “the King of the Jews”.

The vision from today’s first Scriptural reading (Cf. Daniel 7:13–14) presents a human-like figure, one looking “like the Son of Man”, coming into God’s presence. This mysterious heavenly being represents the faithful Israelites suffering on earth. God hands him authority and power over all kingdoms of the earth, with which he will establish God’s everlasting kingdom of peace and righteousness among the nations. The vision reassures God’s suffering people that God controls all events in history, and will triumph over the evil forces that oppress them. This victory will come through his heavenly servant who, looking and acting like a human being, will exercise divine power.

The second Scriptural reading from the book of Revelation (Cf. Revelation 1:5–8) portrays Jesus as the king of kings. There are many similarities between the book of Daniel and Revelation. The latter was also composed against the background of oppression and persecution of God’s faithful. This time it was Christians who suffered at the hands of the Roman Empire.

Revelation was written to offer encouragement and consolation to the suffering believers. Like Daniel, the author of Revelation also assures his readers that, in the end, God’s and their enemies will be overthrown by God. God’s reign will be established and the evil one and his servants will be defeated and utterly destroyed.

Today’s text briefly describes Jesus as the faithful witness, the firstborn of the dead, and ruler of the kings of the earth. Jesus is the faithful witness because he was faithful to his Father and his mission to the point of death. He is the first-born from the dead because of His resurrection. Finally, he is the ruler of all earthly kings because, after his ascension, he possesses divine status and supreme authority. On account of his death, resurrection and return to the Father, Jesus has the authority and power to reign over the universe. All earthly powers, including that of the powerful Roman Empire with its Caesar, are subjected to him.

Christians who follow Jesus and are faithful to him, will also one day become a “kingdom and priests of God, his Father”. Even though they are presently persecuted, since they serve the “king of kings”, they will reign with him. This reign of the faithful will begin with Jesus’ coming “with the clouds”. This is an unmistakable allusion to the reading from Daniel. The author of Revelation sees Jesus as the “Son of Man” who will come to earth with judgement over his enemies, those who “pierced him”. That will be the time of salvation for those who remained his faithful servants amid adversity and persecutions.

Today’s Gospel passage contains a part of Jesus’ trial by Pilate. The evangelist portrays Jesus as the king firm in his convictions, even though powerless and shackled. He stands in stark contrast with the all-powerful Roman governor who, ironically, is hesitant, weak, and ruled by his fears and personal ambitions. Jesus was brought before Pilate on the political charge of laying claims to kingship. In the Roman legal system, such a charge carried an automatic death sentence.

During his conversation with Pilate, Jesus clarifies the origin and nature of his kingship. First, Jesus is not a worldly king. The origin of his kingship and the source of his power are from above, and not of this world. Second, Jesus does not exercise his power the way Rome does; his kingdom “is not from this world” because it is not founded on violence. The Roman rule and authority rested on subjugation, brutality, and ruthless suppression of all who dared to oppose it. By contrast, Jesus’ reign does not oppress but lifts up and liberates people. Finally, Jesus’ kingship consists in bearing witness to the truth. To bear witness to the truth means revealing the truth about God, and drawing all human beings into the divine communion of love.

Membership in Jesus’ kingdom is extended to anyone who listens to him and believes in him because he alone is the true reflection of the Father (Cf. John 1:18). Jesus extends an invitation to Pilate to embrace this truth in his final words, “everyone who belongs to the truth listens to my voice.” This implies that Pilate must dispel his illusions about the world based on falsehood and the power of violence, and follow a different truth, the truth about the world based on love and communion with God as taught and revealed by Jesus.

Christian Act in Word of God “Christ the King”

Divine kingship of Jesus is focused entirely on the liberation and salvation of the people. Those who choose him as their king, can sing joyfully with the Psalmist, “the Lord is king, he is robed in majesty; the Lord is robed, he is girded with strength.” Jesus’ kingship cannot be judged on human terms. In a broader perspective, the divine perspective, Jesus’ mission in kingship appears quite differently. The author of Revelation brilliantly portrays the effects of Jesus self-sacrifice. By God’s design, Jesus’ offering of his life brought him glory and authority unparalleled in the entire creation. His life confirmed what he thought – that leadership consists in service and greatness consists in sacrifice.

In human societies, kingship usually involved the exercise of supreme authority. Kings can establish laws and ensure that they are followed. Even though they might be subject to certain limits imposed on them by tradition and custom, they can often bypass these and impose their will. Even in Christian communities, similar practices occur as the leaders appointed for service exercise it in a self-serving manner, bending the Christian principles to serve their own purposes.

Still, there are many who imitate Jesus the King and carry out the task of leading others with exemplary commitment and with the good of others in view. Experience shows that only the memories of honest and well-meaning leaders will endure and continue to be held and cherished. Self-serving leaders are usually quickly forgotten, or remembered only as examples not to be followed. The Christ-like leaders live on in peoples’ minds as shining examples of what it means to be truly human.

A good Christian leader will bring the faithful closer to Christ, a leader who causes scandals will turn many away from the path of faith. Our age is that of scandals. Many hidden and hideous acts have been perpetrated by Christian leaders in distant and recent history. These need to be honestly acknowledged and treated as a severe warning to all those who aspire to leadership.

Power and authority carry with them a deadly potential to corrupt even a well-intentioned leader. To prevent this from happening, every person entrusted with leading others must rely on Christ’s guidance offered through his teaching and example. For a Christian leader, and, in fact, for every Christian, to claim Jesus as one’s king implies imitating his kingship through a life of other-centred service.

Action: My prayer during this week will be that of praise and thanksgiving to God for the gift of Jesus, his Son and our King, who made it possible for me to belong to God’s kingdom and is the King who is the saviour.

Prayer:O Lord Jesus Christ, our eternal and glorious king, by virtue of our baptism we became kings, with humble reverence we gaze at you as the glorious Lord of all creation. Above all, we thank you for choosing to be the humble king who himself rescued us from the powers of death, and you brought salvation to us. We thank and praise you that opened for us the path to salvation and to your eternal kingdom where we hope to be with you forever and ever, Amen.