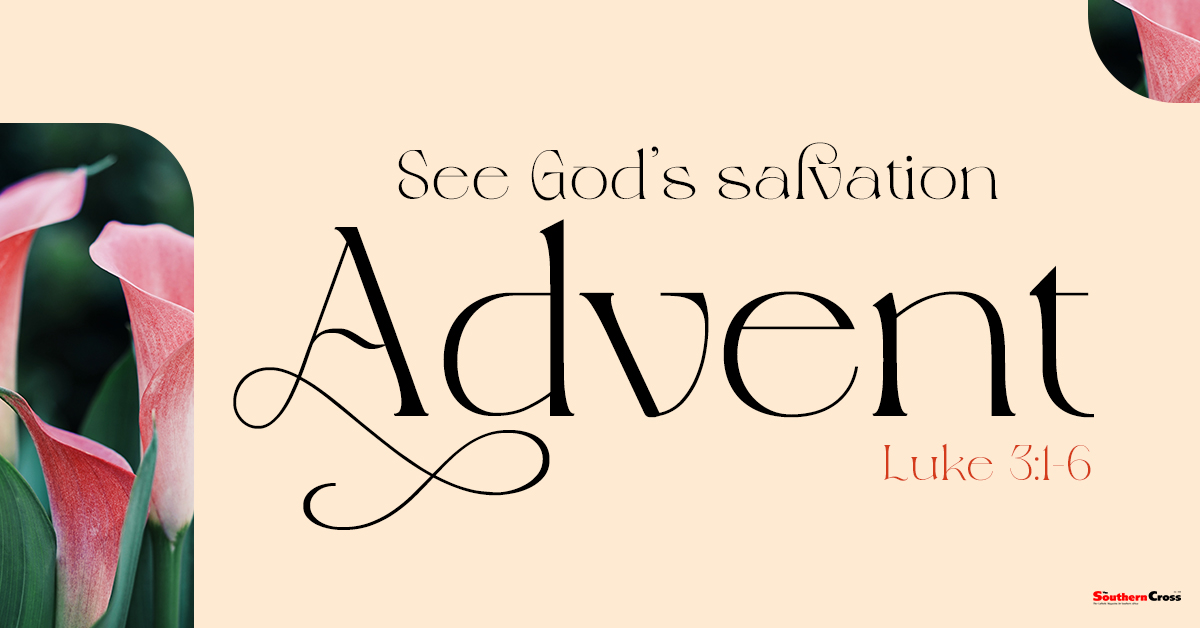 Point of Reflection: Today’s readings graphically and beautifully describe a radical reshaping of reality and a dramatic change of landscape. Baruch portrays a city moving from lamentation to rejoicing, and from ruin to new life. Paul paints a picture of human life that has been utterly altered by reception and response to the Gospel. The Gospel contrasts the landscape of power and wealth of the earth’s rulers, with the wilderness and a wild prophet.

While the rulers would be concerned with maintaining themselves in power, John is concerned with reshaping the hearts of the people to receive salvation brought by God’s Son. All these images manifest God’s transformative power at work in the world, with an invitation to rejoice and to open oneself to God’s transforming intervention. This joy and challenge are well summed up by the Psalmist who confidently states, “those who go out weeping, bearing the seed for sowing, shall come home with shouts of joy, carrying their sheaves.”

Sermon (Reflection): The readings of this Second Sunday of Advent are rich in symbolic imagery of contrasting landscapes. These landscapes represent various human realities and responses to God’s transforming and salvific actions in the world.

The reading from the book of Baruch contains a song celebrating Jerusalem’s future restoration. Baruch was a secretary and assistant to the prophet Jeremiah and wrote his book for the Jews who had seen the destruction of their beloved city and had been forcibly removed from their land. Today’s passage comes from the section called “Poem of Consolation to Jerusalem” (Bar 4:30 – 5:9) intended to encourage and console the Jewish exiles in Babylon with visions of restoration and salvation.

Baruch speaks to Jerusalem, the city that lies in ruins, as if it was a living being. He calls on Jerusalem to “take off the garment of … sorrow and affliction”, “to put on forever the beauty of the glory from God”, and to “stand upon the height; look toward the east, and see your children gathered from west and east”. The lands where the exiles lived were to the East of Jerusalem. Thus, the city is to arise in joyful anticipation of the return of its inhabitants, its children.

As we wait for the birth of the Messiah on Christmas day, as Christians we need to arise in joyful anticipation for the Messiah.

The second reading contains Paul’s vision of the life of the Christian community in the city of Philippi. The Christian community in this city was the very first that Paul founded when he crossed from Asia to Europe (Cf. Acts 16:6-12). It was his “first child” on the continent, and his beloved community. Paul returned to Philippi several times and wrote his most affectionate and gracious letter to that community. Today’s passage comes from the introductory part of this letter, where Paul praises his converts for their acceptance of the Gospel, and for becoming his partners in the mission of bringing the Good News to the world.

Like a good father, Paul beams with pride and joy as he acknowledges that believers in Philippi have been firm in the faith he brought to them. He also commends them for a remarkable and steady progress in Christian love and fellowship.

St Paul has given us new landscapes of our Christian life which is forming new life. Paul describes our new life in a four-fold way. First, we must have a life of growing love for one another. Second, love would be accompanied by knowledge, allowing ourselves to discern God’s will. Third, Purity and blamelessness go together, describing morally impeccable conduct towards God and others. Finally, our life must be a life producing “the harvest of righteousness”, which is Paul’s way of describing the fruits of an intimate union of believers with Jesus and with the Father. Paul also prays that his converts would live on earth with a keen awareness of “the day of Christ” – the Parousia – which would focus them on the life to come.

The Gospel passage of today presents us with a precursor of Christ: John the Baptist. John the Baptist stands in the line of the great Old Testament prophets as a carrier of God’s message. He fulfils what his father, Zechariah, proclaimed in his great song of praise, stating that John would “give knowledge of salvation to his people by the forgiveness of their sins” (Luke 1:77). Thus, John would not herald political liberation from the rule of all the authorities that Luke had named.

Rather his ministry fulfils the prophecy of Isaiah 40:3-5 which defined him as the voice crying in the wilderness to prepare the way for the Lord. Isaiah also stated that, “every valley shall be lifted up, and every mountain and hill be made low; the uneven ground shall become level, and the rough places a plain”. This statement of Isaiah is remarkably like the passage from Baruch. Both foresaw the reshaping of the physical landscape as a symbol of preparation for God’s salvific intervention.

John’s mission was that of changing the landscape of human hearts by calling for repentance, and baptising people for the forgiveness of sins. These acts prepared the people for welcoming the Messiah, Jesus, who would come with God’s salvation. But before this salvation could be received, the people must turn away from their sins which alienate them from God. John’s mission was intended to renew humanity, to prepare a new landscape, a fertile ground, where God’s salvation could take root.

The God who reshapes geographical landscapes is the same God who reshapes the lives of his people. With surprising divine interventions, God rewrites the history of individuals and communities, moving people from a state of hopelessness to hope.

The message of the prophet Baruch was intended to bring hope to God’s people by revealing the Lord’s decision to save them. God’s ardent desire to save humanity, not only from political captivity but, more importantly, from spiritual captivity, is further expressed in the ministry of John the Baptist who preached a message of repentance, echoing the prophetic words of Isaiah, “prepare the way of the Lord, make his paths straight. Every valley shall be filled, and every mountain and hill shall be made low, and the crooked shall be made straight, and the rough ways made smooth.”

It is true that our sojourn through life is not always rosy, and that no matter how bright the day is we cannot escape the night. Indeed, there are moments when we are up and then the next moment, we are down.

However, the message of Advent is that God will never allow us to remain in darkness, he will not leave us alone in the depths of the sea.

The Scripture assures us of that truth and gives us hope. That hope sustains us because, as is powerfully stated in a proverb, “the hope of a sunrise chases away the fear of sunset.” Even if we find ourselves in the dark valleys of life, it is hoped that can fill those valleys and make our path smooth.

The power of God to save is real. It brings about tangible change in our lives. Advent is a season when we are called upon to reach for the grace of salvation that God is offering through Christ. It is the desire of God to do new things and open new chapters in our lives. The question is: Will we allow the Lord to save us? The Messiah is to be born.

Action: In prayer, I reflect over my life and identify those areas where I am broken and stand in need of healing. I surrender them to the Lord in faith.

Prayer: Eternal Father, your faithful love endures throughout the ever-changing landscape of life. No matter what comes my way, help me to believe that you are always able and willing to form a new landscape. In times of darkness, give me the wisdom to look for the help and hope that come from you. During this Advent season, help us to be transformed and be better people, we ask through Christ, Our Lord, Amen.