Pope’s Nephew: Despite age, surgery, the pope is still energetic 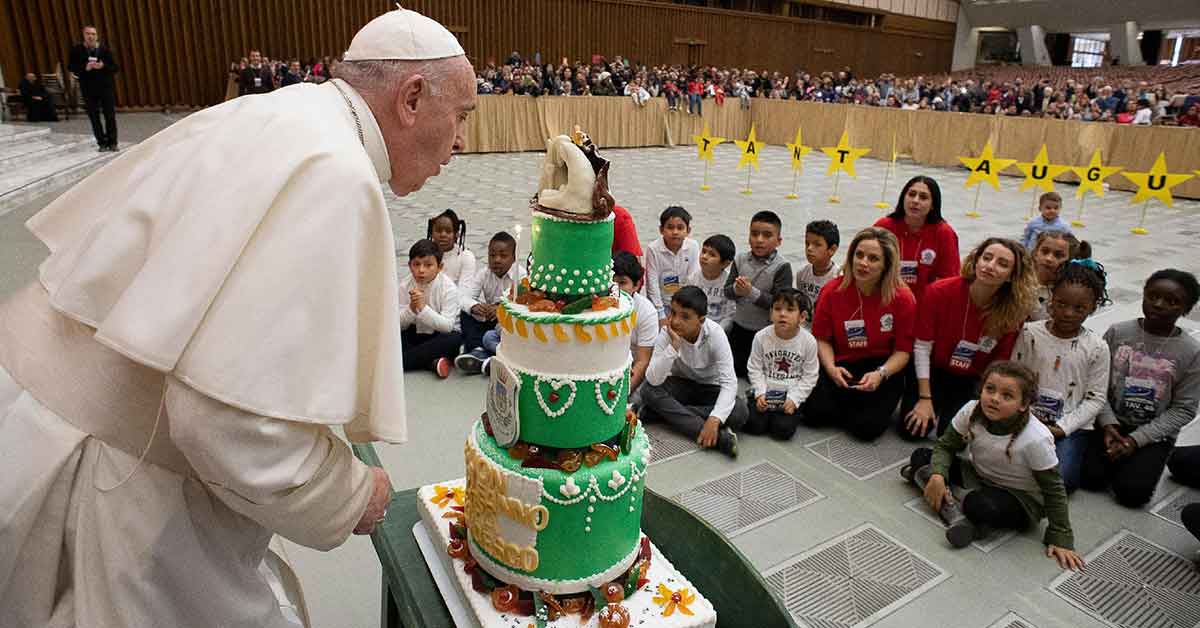 Pope Francis blows out the candle on a cake made for his Dec. 17 birthday during a special pre-Christmas meeting with children at the Vatican in this Dec. 22, 2019, file photo. The pope celebrates his 85th birthday today and, according to his nephew, Jesuit Father José Luis Narvaja, he is still energetic and rarin’ to go. (CNS photo/Vatican Media)

By Carol Glatz – Pope Francis turns 85 years old today. And according to his nephew, Jesuit Father José Luis Narvaja, he is still rarin’ to go.

“I see him doing very well, with so much strength; really, he doesn’t seem to be 85,” the Argentine priest told the Italian Catholic magazine, Famiglia Cristiana, for its Dec.12 issue.

Father Narvaja, who is the son of the pope’s youngest sister, the late Marta Regina Bergoglio, said he visited his uncle, the pope, right after his colon surgery in July. Even then, “he was doing well but he was still in a bit of pain, and he told me, ‘Don’t make me laugh, the stitches hurt!'” he said.

“He is very active, enthusiastic, he doesn’t stop. He said some people had hoped his illness would make him shut up a little, but it didn’t. He’s doing very well,” said Father Narvaja, who teaches patristics and divides his time between Rome and Cordoba, Argentina.

Speaking about his uncle’s approach to his ministry as pontiff, the fellow Jesuit said, “He does what he feels the Spirit is asking of him.”

Pope Francis’ idea of reform “is to put Christ at the centre of the church and our lives, and this is a process that takes time,” he said. “Of course, sometimes he feels he has to say a harsh word, but he knows he is an instrument of God.”

Making Jesus the central point “does not mean putting a statue in the centre of the house but listening to Jesus to understand what he wants from each of us, allowing him to transform our hearts,” said Father Narvaja.

“The pope is not a manager. It is Jesus who, by being at the centre, puts things in place,” he said, and the pope feels “he has to give time to transform hearts, which is what Jesus does.”

“Sometimes we think that the Spirit spoke in ancient times and doesn’t speak any longer and, therefore, we do not want to change anything,” Father Narvaja said. “But the Spirit continues to speak to us, he speaks to the church, and we must make sure that the Lord continues his work through us.”