The Story of ‘We Three Kings’ 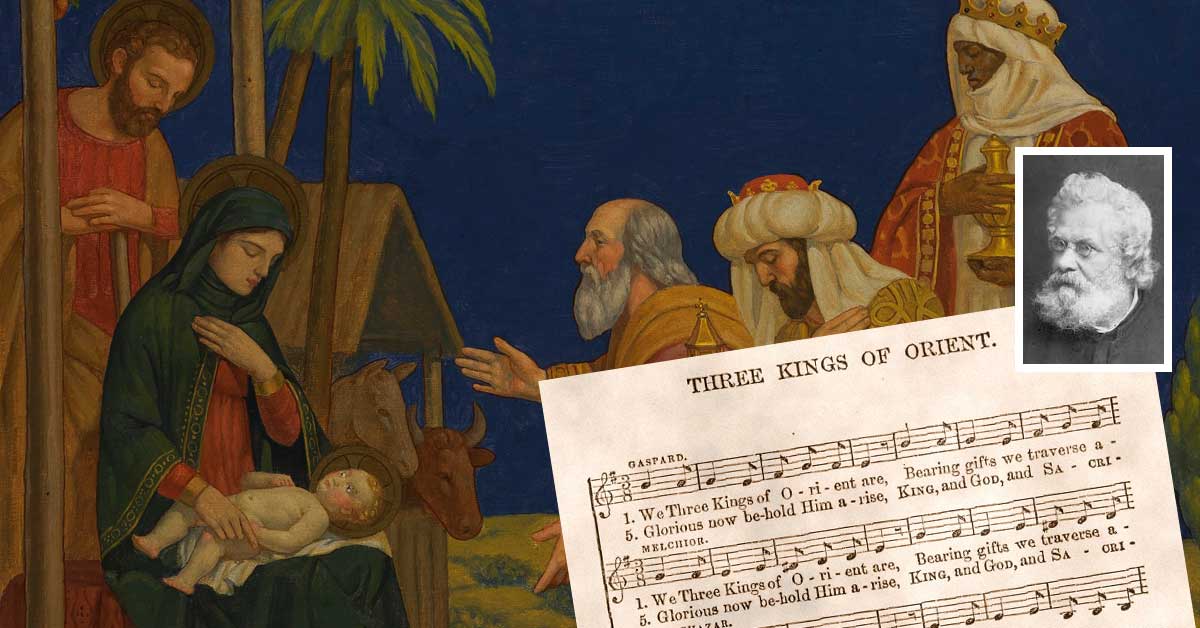 John Henry Hopkins Jr and the sheet music to “We Three Kings” as published in his book of hymns in 1863. Background: The Magi by H Siddons Mowbray.

Many of our beloved Christmas carols have come from the United States, and “We Three Kings” was the first to cross the Atlantic and become popular throughout the Anglophone world.

Its vaguely Eastern-sounding chorus — “O Star of wonder, star of night, star with royal beauty bright” — gives this carol the hint of authentic flavour: the story of the hymn plays out in Bethlehem, which is to the East of most who sing it, and the protagonists arrive in Bethlehem from the east.

John Henry Hopkins Jr, who in 1857 wrote “We Three Kings Of Orient Are” (to give it its full grammatically-tortured title), was something of an all-rounder. He was born in 1820 as the son of an influential Episcopalian (US Anglican) cleric who would later become a leading (and anti-Catholic) bishop. Like his father, he had a broad field of interests in which he excelled: as an author, illustrator, designer, composer, music teacher and journalist. And, like his father, he also was a cleric.

As so often, a widely-beloved Christmas carol had humble beginnings. Hopkins, a bachelor,  wrote “We Three Kings” as a Christmas present for his nieces and nephews. It was first performed at the family gathering at his father’s Vermont residence for Christmas 1857.

We may imagine how the carol was performed. The verses are written for three male voices, each taking a solo on behalf of the respective Wise Men from the East: Caspar, Melchior and Balthazar. Perhaps John Henry Jr took one verse, his father another, and his brother — the father of the children for whom the carol was written — the third. The rather melancholy sounding verses would then be responded to by all in that rousing chorus.

The family loved it, as did the congregation at Trinity church in New York a Christmas later — but the composition was no instant success on the Christmas carols hit parade. It was only after its repeated publication in the 1860s that the popularity of “We Three Kings” spread, but then quickly.

A lesser seasonal Hopkins composition, “Gather Around the Christmas Tree”, also enjoyed some popularity, but is rather forgotten now. Still, for a while Hopkins was given the title “The Father Christmas of Vermont”, even though he neither lived nor composed there (he, however, did have a suitable beard). Today Hopkins is remembered for “We Three Kings”, which is one of the few standards in the canon of carols to be credited, in words and lyrics, to one single person.

Hopkins did not add much else to the world of song; his main job was the care of souls as an Episcopalian rector of parishes in Plattsburgh, New York and Williamsport, Pennsylvania. Hopkins died in 1891 at the age of 70.

His great legacy is a Christmas carol sung in churches throughout the world — despite its perpetuation of a historical misunderstanding. St Matthew, who in his Gospel reports on the visit of gift-bearing men from the East, neither lists the size of the delegation nor their rank and title. The Western idea that they were three in number (some traditions in Eastern Christianity count 12 of them) is generally inferred from the number of gifts they bore: gold, frankincense and myrrh.

And because these items were so expensive, a tradition arose that only kings could afford such extravagances. That idea is supported by the prophecy of Isiaiah, who referred to “kings” bearing gold and frankincense, and Psalm 72:11 (“May all kings fall down before him”).

Contrary to many depictions of the Nativity, the Magi were not present at the neonatal stable that first Christmas. Matthew simply doesn’t say when they arrived.

But let the finer points of scholarship not disturb us at Christmas. In as far as we are allowed to sing “We Three Kings” at Covid-restricted Christmas Masses in our churches this year, let heaven sing Hallelujah, and “Hallelujah the earth replies”.

More stories behind the carols are at www.scross.co.za/category/features/biography-of-hymns/