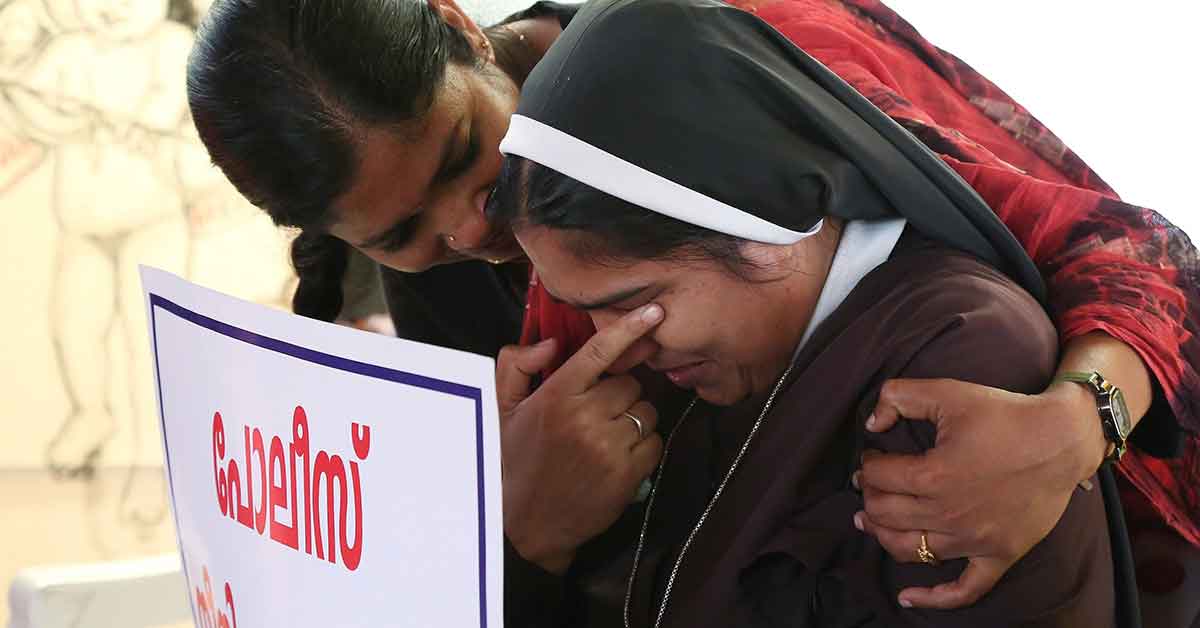 A nun is consoled during a Sept. 13, 2018, protest in Cochin, India. The protest was to demand justice after a former religious superior accused Bishop Franco Mulakkal of Jalandhar of raping her. Indian nuns questioned the church’s silence in the rape case and expressed support for the complainant nun after a court acquitted Bishop Mulakkal of all charges Jan. 14, 2022. (CNS photo/Sivaram V, Reuters)

By CNS –  Catholic women religious in India have expressed support for a nun days after Bishop Franco Mulakkal of Jalandhar was acquitted by a court of rape charges made by her. They also questioned the sustained silence of the official church on the case, reported ucanews.com.

“As women religious, we express our solidarity with the victim-survivor and her companions, who have walked with the victim with a lot of courage, dignity and determination in their fight for justice,” the Conference of Religious India said in a letter to Cardinal Oswald Gracias, president of the Catholic Bishops’ Conference of India.

Ucanews.com reported the letter, dated Jan. 20, has no endorsement from any priest, but Apostolic Carmel Sister Maria Nirmalini, the newly appointed national president of the conference of religious, said she had been inundated with phone calls from both religious men and women as well as laypeople from around India after Bishop Mulakkal’s acquittal Jan. 14.

“The issue here is not that most religious women are completely taken aback with a totally unexpected verdict against the sister, but a section of the clergy and people have been celebrating the verdict as a victory for the church,” Sister Nirmalini said.

“Right from the beginning of the case, the victim sister and her companions were subjected to all kinds of innuendos and insults. Hardly any church authorities supported them. How come a bishop who is accused of rape is part of the church and the victim, along with her supporters, are not?” asked Sister Nirmalini, who as the Conference of Religious India president represents close to 125,000 Catholic religious.

The letter also appealed to the cardinal to “reach out” and provide all possible help to the nun and five nuns who supported her throughout the trial, ucanews.com reported.

“Nobody paid any attention to the victim, who approached several church authorities before she was made to go public and to the court to seek justice. Her companion sisters had the grit to fight the power and might of Bishop Franco. The sisters – with no financial backing or support from the church – went through their dignity being stripped as women … power was being wielded against them,” the letter said.

A trial court in the southern state of Kerala exonerated the prelate of all charges, including raping the former superior general of the Missionaries of Jesus, a congregation under his patronage. The court said the prosecution “failed to prove the charges against the accused.”

The nun had accused Bishop Mulakkal of raping her 13 times during his visit to her convent in Kerala between 2014 and 2016.

Referring to reports of the nun and the prosecution planning to appeal the verdict, the letter said: “Whatever the outcome of their appeal in the higher court, our serious concern now is if the church has a forum where religious women who suffer sexual abuse from their bosses, be they priests or bishops, can present their cases and where they would be heard sympathetically.”

“As you know well, while the religious women are rendering incredible service in society and are the face of the church, we have no power or jurisdiction. Where do we go? Should all religious women knock on the doors of the court for justice? We really wonder if this will make other women ever step forward or would leave them with no choice but to suffer in silence,” it added.