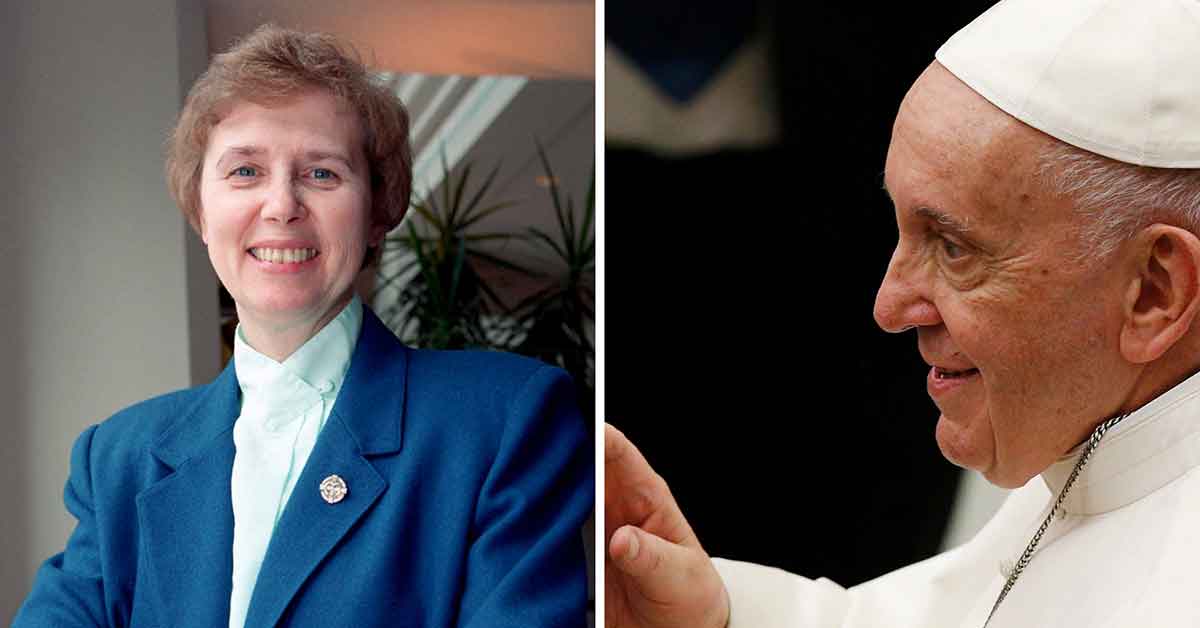 By Mark Pattison – When Loretto Sister Jeannine Gramick began her ministry to gay and lesbian Catholics 50 years ago, she likely never imagined she would be exchanging letters with a pope.

But that’s what happened, and it started fairly innocuously.

New Ways Ministry, which Sister Gramick co-founded with the late Father Bob Nugent, took the chance to write to Pope Francis last April. It was intended to be a letter of introduction to New Ways Ministry and its history.

Some of that history has been painful, including investigatory commissions both in the United States and at the Vatican, which included a condemnation in 2010 by the Vatican Congregation for the Doctrine of the Faith.

The president of the U.S. Conference of Catholic Bishops at the time was Chicago Cardinal Francis E. George, who pronounced that “we were not a Catholic organisation because we were advocating civil marriage for lesbian and gay couples,” Sister Gramick said in a Jan. 10 phone interview with Catholic News Service.

She said that Frank DeBernardo, the New Ways executive director, had the idea that “Cardinal George condemned us for the same thing that Pope Francis is saying.”

“We put all of that in a letter” to the pope, she said. Given New Ways’ past dealings with the Vatican, there was no telling what the reply might be, assuming there was a reply. But as she put it: “We got a beautiful letter back.”

“We then wrote him another letter telling him we didn’t want to do anything without his permission,” Sister Gramick said. “The correspondence continued between Pope Francis, New Ways and me.”

“The amazing thing, I think, is, we wrote him at the end of April, and then within two weeks he wrote back. And then it takes us a month or two months to write, ‘We want to keep up this correspondence’ – and he wrote us back in a week.”

Then it started getting personal. “The first one I wrote him in my name was just introducing myself and telling him about my grandmother,” Sister Gramick said, adding: “I know he has a great love for his grandmother.”

But why stop there?

“I wrote him another letter,” Sister Gramick said. “By that time, America (magazine) had heard that we were in correspondence. Also they’d heard that I was celebrating 50 years in this ministry.” She pointed out that she predates New Ways, which started in 1973. She started her ministry in 1971 when she was a graduate student.

As a result, she said she wrote the pope another letter telling him about her 50 years in this ministry.

While America referred to the letters, Sister Gramick said: “I didn’t want to do anything that would jeopardise his ministry as pope.”

In return, though, “he wrote me this beautiful letter, which America reprinted.”

New Ways Ministry in the meantime had been asked by synod officials to contribute resources for gay and lesbian Catholics to be posted in anticipation of the upcoming Synod of Bishops on synodality.

The resources were sent to the Vatican, which posted them on a synod webpage. But in late 2021, they were removed without explanation. After this was noticed and brought to the Vatican’s attention, a Vatican official apologised for their removal, and the material was restored, which Sister Gramick said she considered “very significant.”

The apology, she added, marked “the first time any LGBT group has gotten an apology from the Vatican.”

It also represents a sea change. Sister Gramick remembers more than 40 years ago when Cardinal James A. Hickey was the archbishop of Washington and she was a member of the School Sisters of Notre Dame. Cardinal Hickey summoned Sister Gramick’s provincial and said, “I don’t know why she’s in this ministry. I didn’t assign her to this ministry.”

“My provincial said, ‘We assigned her to this ministry,'” Sister Gramick told CNS.

“One (said), ‘We should have more people doing this ministry.’ Well, that’s not what they wanted.”

Cardinal Hickey “wrote to the CDF and the Congregation for Religious,” Sister Gramick said, adding, “and I have copy of this letter: ‘At the risk of trying your patience, I ask that you bring pressure up on Sister Jeannine’s superiors to remove her from the ministry.’ When that didn’t work, they formed their own commission.”

Ties between the Archdiocese of Washington and New Ways Ministry, headquartered in the Washington suburb of Mt. Rainier, Maryland, were virtually nonexistent throughout the 1980s and 1990s. “There’s been not a formal relationship, but we’ve had a good private relationships since Cardinal Hickey” with each of his successors, Sister Gramick said, including the current archbishop, Cardinal Wilton D. Gregory.

“There’s a new era in the church because of Pope Francis. He’s enabling people to feel freer. There have been many people who have been in leadership positions in the church who have been LGBT-friendly and want to be inviting, but it seems to me these church leaders are always afraid of what the leader above them is going to say,” Sister Gramick said.

Dignity “predated New Ways Ministry and it precedes my ministry,” Sister Gramick said, “because when I got involved in ’71, one of the things I did was to start a Dignity chapter in Philadelphia.”

This new relationship between New Ways Ministry and the Vatican does not mean there won’t be any resistance in the future. “There will still be some dioceses where bishops will not welcome me. I know a diocese where a bishop wants a certain cardinal not to speak,” Sister Gramick said. “If a bishop bans a certain cardinal – whose views I happen to agree with – from speaking, he certainly will not want me.”

She also offered some advice for the USCCB: “I think the bishops’ conference has a lot of work to do. They need to start talking with each other, and get with the program – Pope Francis’ programme.”