Pope on Epiphany: Jesus is Star Guiding People to Joy 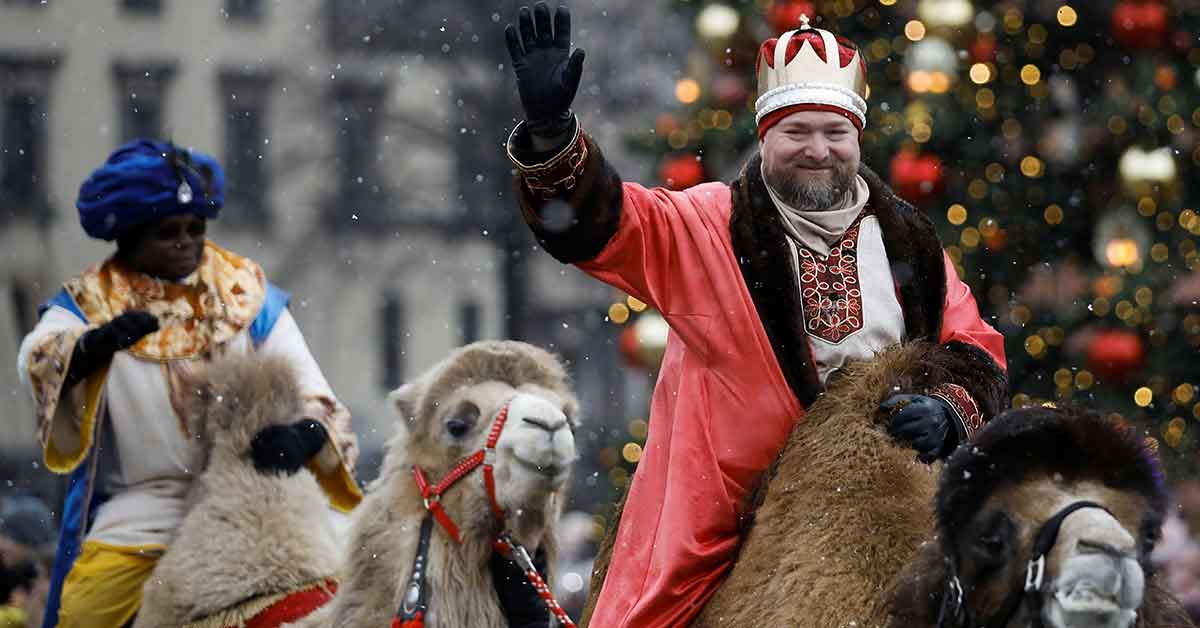 Participants wearing costumes ride camels during the Three Kings Cavalcade in celebration of the feast of the Epiphany in Warsaw, Poland, Jan. 6, 2022. (CNS photo/Kacper Pempel, Reuters)

By Junno Arocho Esteves – Just as the Magi were guided by a shining star, Christians can rest assured that the light of Christ will guide them to a happy and meaningful life, Pope Francis said on the feast of the Epiphany.

“The Magi teach us that we need to set out anew each day, in life as in faith, for faith is not a suit of armour that encases us; instead, it is a fascinating journey, a constant and restless movement, ever in search of God,” the pope said.

In accordance with an ancient tradition, after the proclamation of the Gospel, a deacon chanted the announcement of the date of Easter 2022 (April 17) and the dates of other feasts on the church calendar that are calculated according to the date of Easter.

After celebrating Mass, the pope led the recitation of the Angelus prayer with visitors in St. Peter’s Square.

In his Angelus address, the pope said that in prostrating and worshipping baby Jesus, the humble Magi showed that their true wealth did not lie in fame or success, but in “their awareness of their need of salvation.” 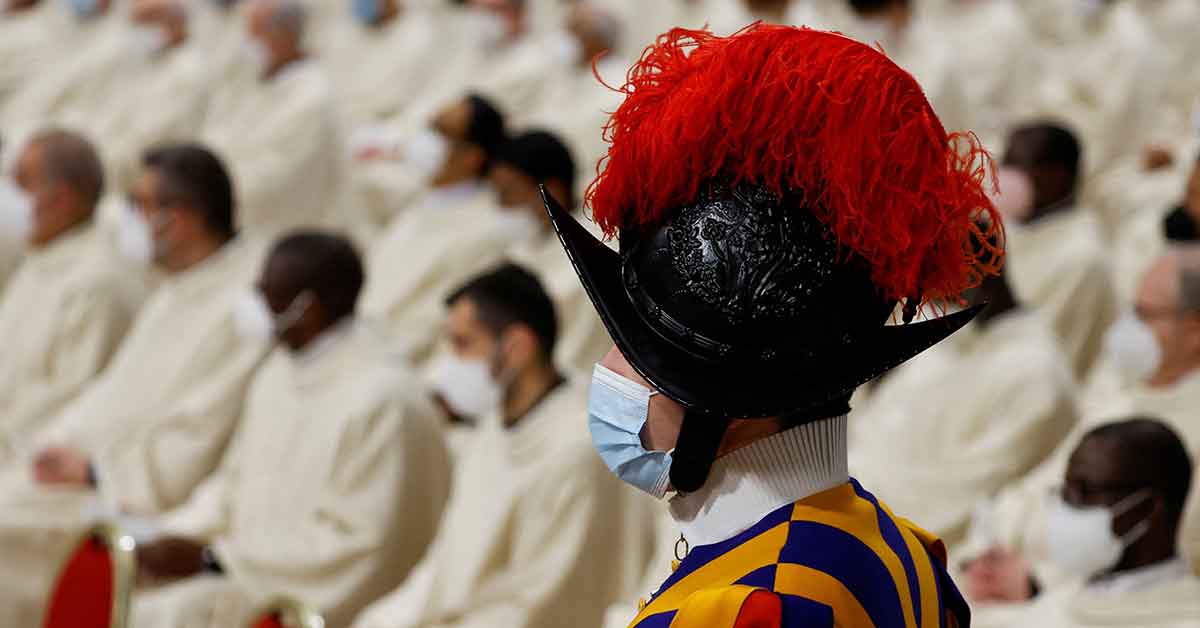 A Swiss Guard wearing a mask for protection from COVID-19 keeps watch as clergy attend Pope Francis’ celebration of Mass for the feast of Epiphany in St. Peter’s Basilica at the Vatican Jan. 6, 2022. (CNS photo/Yara Nardi, Reuters)

Like the Magi, Christians must also follow their example of humility, otherwise, “if we always remain at the centre of everything with our ideas, and if we presume to have something to boast of before God, we will never fully encounter him, we will never end up worshipping him.”

“If our pretensions, vanity, stubbornness, competitiveness do not fall by the wayside, we may well end up worshipping someone or something in life, but it will not be the Lord,” the pope said.

Earlier, in his homily at Mass, the pope reflected on the journey of the Magi to Bethlehem. Although “they had excellent reasons not to depart,” having already attained knowledge and wealth, the three men “let themselves be unsettled” by the question of where the Messiah would be born.

“They did not allow their hearts to retreat into the caves of gloom and apathy; they longed to see the light,” the pope said. “They were not content to trudge through life, but yearned for new and greater horizons. Their eyes were not fixed here below; they were windows open to the heavens.”

The “spirit of healthy restlessness” that led them on their journey, he explained, was “born of a desire” to seek something greater than themselves or what they possessed.

Christians also must live their journey of faith like the Magi, which “demands a deep desire and inner zeal,” and they must ask themselves whether their faith has remained stagnant in a “conventional, external and formal religiosity that no longer warms our hearts and changes our lives,” he said.

“Do our words and our liturgies ignite in people’s hearts a desire to move toward God or are they a ‘dead language’ that speaks only of itself and to itself?” he asked. “It is sad when a community of believers loses its desire and is content with ‘maintenance’ rather than allowing itself to be startled by Jesus and by the explosive and unsettling joy of the Gospel.”

Departing from his prepared remarks, the pope said it was also sad when a priest or bishop closes the door to a desire for God and instead falls into “clerical functionalism.”

The current crisis of faith in life and in society, he added, is “related to a kind of slumbering of the spirit, to the habit of being content to live from day to day, without ever asking what God really wants from us.” 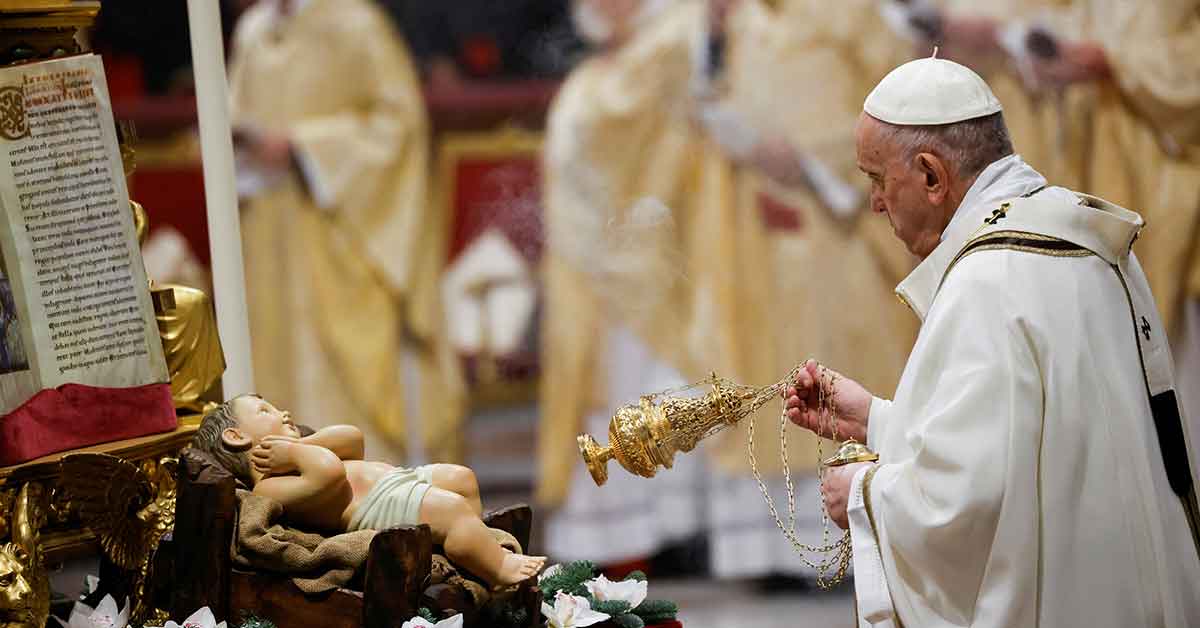 Pope Francis burns incense as he venerates a figurine of the baby Jesus during Mass for the feast of Epiphany in St. Peter’s Basilica at the Vatican Jan. 6, 2022. (CNS photo/Yara Nardi, Reuters)

And, he said, Christians must allow themselves to be “unsettled by the questions of our children, and by the doubts, hopes and desires of the men and women of our time.”

Their journey, he said, also mirrors the upcoming Synod of Bishops on synodality, which is a time of listening “so that the Spirit can suggest to us new ways and paths to bring the Gospel to the hearts of those who are distant, indifferent or without hope, yet continue to seek what the Magi found: ‘a great joy.'”

The Magi’s journey ends with the adoration of baby Jesus, Pope Francis noted.

“Indeed, our hearts grow sickly whenever our desires coincide merely with our needs,” the pope said.

“God, on the other hand, elevates our desires; he purifies them and heals them of selfishness, opening them to love for him and for our brothers and sisters. This is why we should not neglect adoration: let us spend time before the Eucharist and allow ourselves to be transformed by Jesus,” he said.