Pope Pops by his Favourite Record Store to Say ‘Hello’ 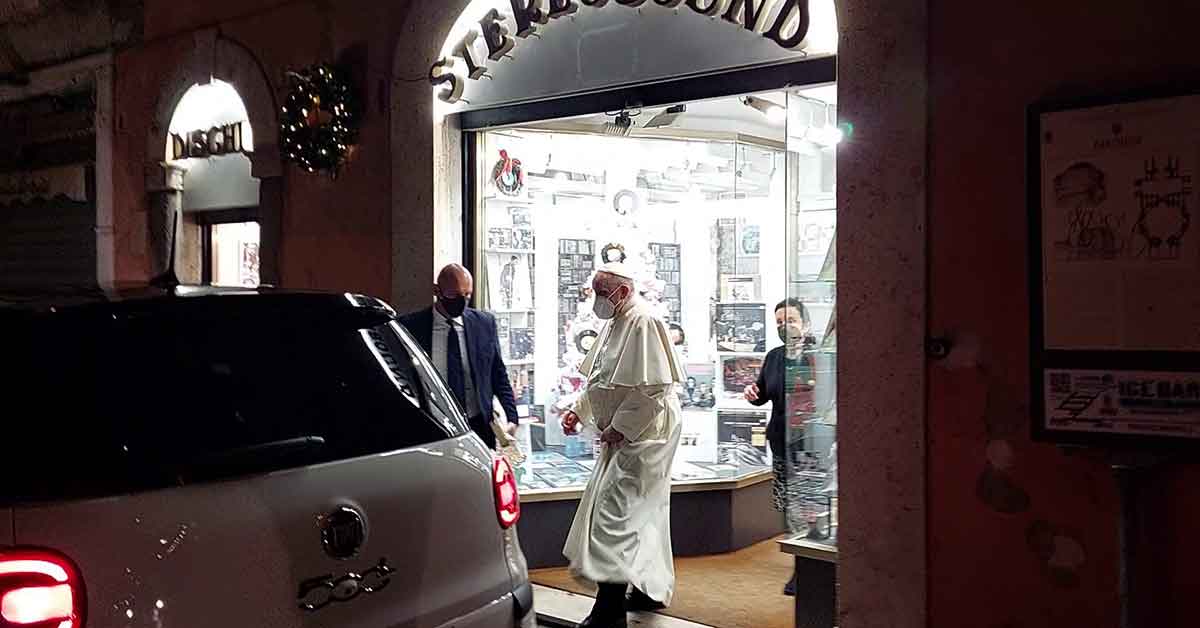 Pope Francis holds a record under his arm as he leaves the Stereo Sound record shop in Rome Jan. 11, 2022. The pope made a surprise visit to the music store he used to go to as a cardinal, receiving a record of classical music as a gift from the thrilled shop owner. (CNS photo/Javier Martinez-Brocal, Rome Reports)

By Carol Glatz – Pope Francis took an evening ride in a white Fiat 500 to visit a record store he used to go to when in Rome as a cardinal.

Letizia Giostra, the store owner, told the Italian newspaper Corriere della Sera that the surprise visit on Jan. 11 was “an immense thrill.”

“The Holy Father is passionate about music and was already our client, years ago, when he was still a cardinal and would pass through Rome. Then, of course, we never saw him again. And now he came to visit us, to say ‘hello,'” she said.

Asked about the record he was holding under his arm when a Vatican reporter happened to see the pope emerge from the store, Giostra said, “It’s a gift we gave him, a record of classical music.”

Located right across from the Pantheon, the family-owned store, Stereo Sound, specialises in a wide variety of music, particularly opera and classical, on vinyl records and CDs.

The store’s streetside display still showcased Christmas music albums, decorations and a small white Christmas tree adorned with 45 RPM records and cassette tapes when the pope was caught on camera by Javier Martínez-Brocal, a Vatican reporter and director of Rome Reports news agency.

Martínez-Brocal posted the video and photos on Twitter and explained he had been in the neighbourhood when he saw the white Fiat with Vatican license plates and some police cars parked in front of the store around 7 p.m. He said the pope was inside for about 12 minutes, visiting with the owner, her daughter and son-in-law.

Just one week ago, the store’s Instagram feed posted an autographed copy of Patti Smith’s “Land” CD, to mark her Dec. 30 birthday and reminisce about the American songwriter-singer’s many visits to the store.

“It was an immense joy, I was so excited, darned shyness that blocks your speech, that I couldn’t say anything to her, only if she could kindly autograph my CD. There were no smartphones back then to capture the moment, I’m left only with the memory in my mind and my (heart emoji),” the @discoteca.pantheon post said.

The pope has made it a fairly frequent habit to get in a car and go visit people or – less frequently – to a store to conduct his own business.

His first full day as pope March 14, 2013, he went to his hotel, picked up his luggage, paid his bill and thanked the staff. He went to drop off his eyeglasses for a new pair of lenses in 2015 at an optician in the city centre and he stopped by a store specialising in orthopaedic wear not far from his Vatican residence in 2016.

In a 2016 interview with “La Voz del Pueblo,” the pope said he missed being able to go out and walk or go to a pizzeria.

“I could order it, but it is not the same. It’s nice to go there,” he told the Argentine news outlet.

“I’ve always been big on walking,” he said, saying it is “enchanting” to just move along the city streets or ride the subway.

He admitted he is known for being “undisciplined. I don’t really follow protocol very much, it feels cold. But when it is for official business, I totally stick to it.”