Pope: Pride is an Obstacle to Christian Unity 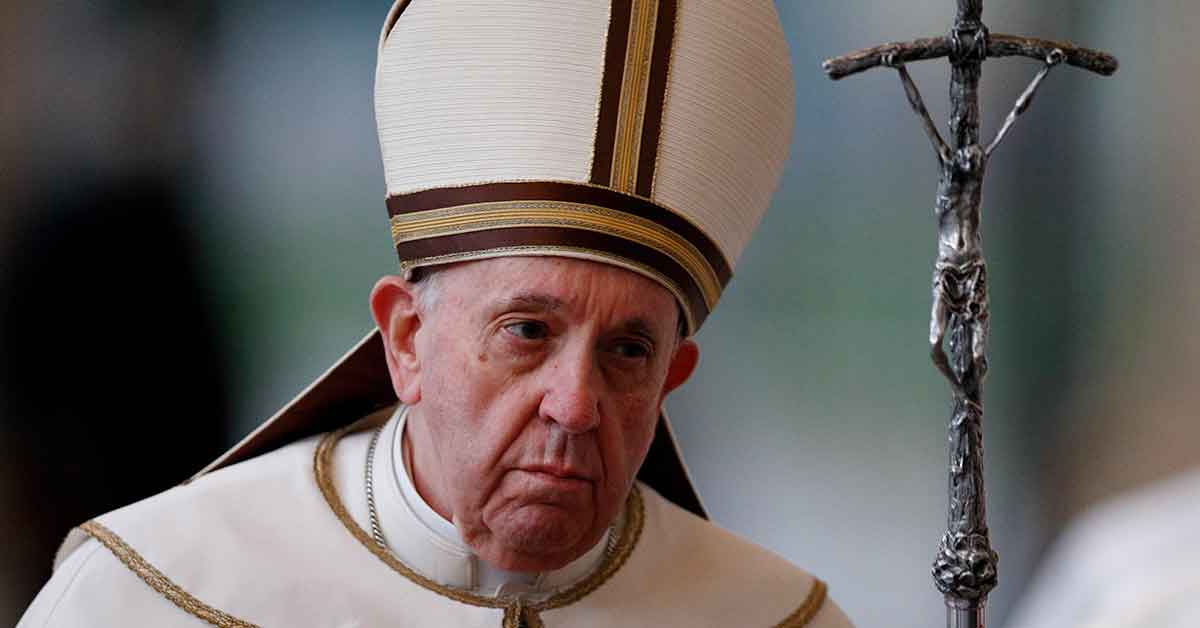 Pope Francis carries his crosier as he arrives in procession for an evening prayer service at the Basilica of St. Paul Outside the Walls in Rome on Jan. 25, 2022. The service marked the end of the Week of Prayer for Christian Unity. (CNS photo/Paul Haring)

By Cindy Wooden – Divided Christians will never find unity unless they are willing to humble themselves, bowing down to worship Jesus and him alone, Pope Francis said.

“How many times has pride proved the real obstacle to communion,” the pope said as he closed the Week of Prayer for Christian Unity on Jan. 25 during an ecumenical evening prayer service at Rome’s Basilica of St. Paul Outside the Walls.

As the service began, Orthodox Metropolitan Polykarpos of Italy and Anglican Archbishop Ian Ernest, the archbishop of Canterbury’s representative in Rome, joined Pope Francis in descending the stairs under the main altar to pray before the relics of St. Paul. At the conclusion of vespers, they joined the pope in blessing the congregation.

At the beginning of his homily, Pope Francis extended a special welcome to students from the Ecumenical Institute of Bossey in Switzerland, Anglican students from Nashotah House Theological Seminary in Wisconsin and Orthodox and Oriental Orthodox students studying in Rome with scholarships from the Pontifical Council for Promoting Christian Unity.

The theme for the 2022 celebration of the week was the affirmation of the Magi or Three Kings, “We saw the star in the East, and we came to worship him.”

The theme was chosen by the Middle East Council of Churches, working with the pontifical council and the World Council of Churches. Pope Francis pointed out how many challenges, including war and violence, those Christians face, “yet by their testimony, they give us hope. They remind us that the star of Christ shines in the darkness and never sets; from on high, the Lord accompanies and encourages our steps.”

The Magi, the pope said, saw the star, yet they were searching for a “greater light,” which led them to Jesus.

Christians are called to follow Jesus, to live his Gospel and to strive for the unity he prayed his disciples would have, the pope said. Christians must follow that call “without worrying about how long and tiring may be the road to its full attainment.”

When the Magi reached Jerusalem, he said, they encountered the resistance of Herod and the fear of the people, yet they continued to Bethlehem.

“Along our journey toward unity, we too can halt for the same reason that paralysed those people: confusion and fear,” he said, including “the fear of a newness that upsets our usual habits and our sense of security; the fear that others may destabilise my traditions and long-established patterns.”

Christians must trust in the Lord who told them not to be afraid, and they must trust their Christian brothers and sisters, moving forward together “despite our failings and our sins, despite the errors of the past and our mutual wounds,” Pope Francis said.

The Gospel of Matthew says that when the Magi arrived in Bethlehem and found Jesus, “they prostrated themselves and did him homage.”

Their example, the pope said, reminds Christians that to worship the Lord worthily, “we must fall to our knees.”

“That is the way: bending low, setting aside our own pretences in order to make the Lord alone the centre of everything,” he said.

“To humble ourselves, to leave certain things behind, to simplify our lives: this evening, let us ask God for that courage, the courage of humility, the one way to come to worship God in the same house, around the same altar,” Pope Francis said.

And like the Magi, he said, Christians must be aware that the Holy Spirit has given each of them gifts “destined for the common good, for the uplifting and unity of his people.”

Pope Francis prayed that just as the Magi returned home “by another way,” divided Christians would change “the route of our habits and our ways, in order to find the path that the Lord points out to us: the path of humility, fraternity and adoration.”