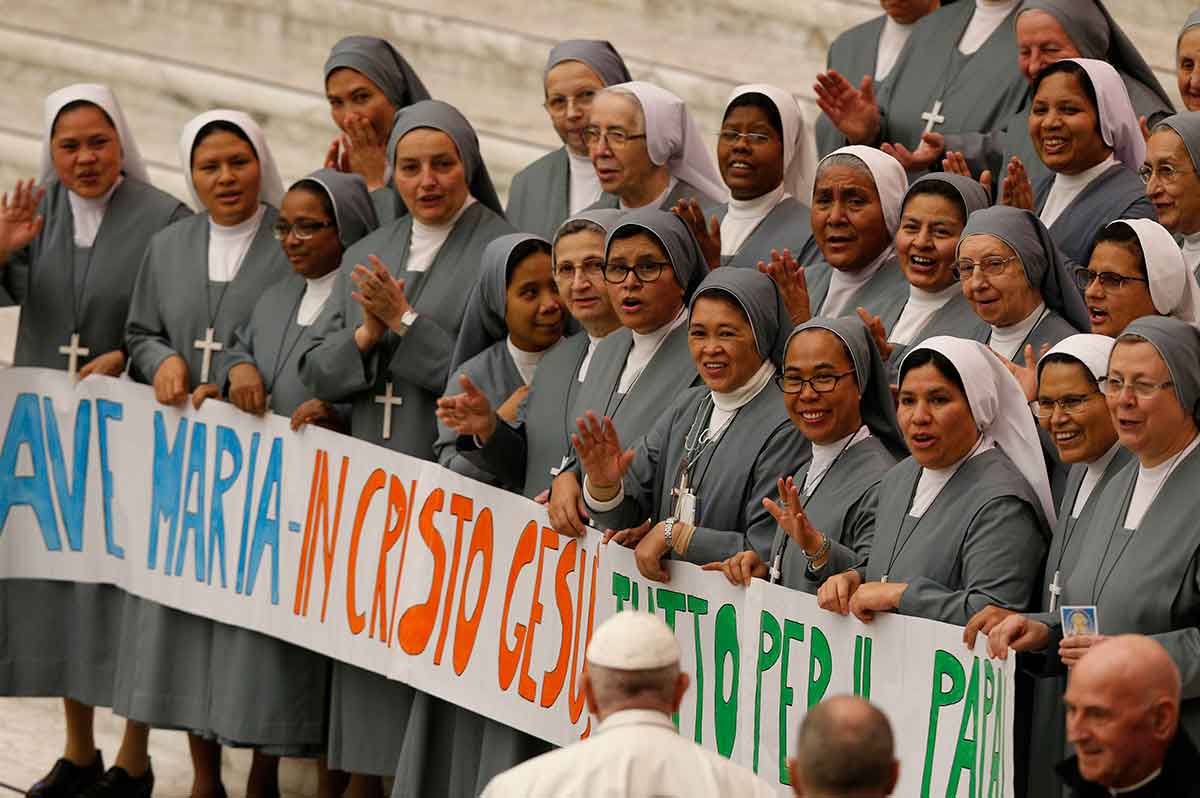 Pope Francis greets a group of nuns during his general audience in the Paul VI hall at the Vatican Jan. 5, 2022. (CNS photo/Paul Haring)

By Junno Arocho Esteves – As the foster father of Jesus, St Joseph is an example of the need for loving fathers and mothers in “an age of notorious orphanhood,” Pope Francis said.

The “demographic winter” in many Western countries, due in part to couples unwilling to have children, “diminishes us, it takes away our humanity,” the pope said Jan. 5 during his weekly general audience.

There are “many couples do not have children because they do not want to, or they have just one, but they have two dogs, two cats. Yes, dogs and cats take the place of children,” the pope said, eliciting laughter. “Yes, it’s funny, I understand, but it is the reality.”

“In this way, civilisation becomes aged and without humanity because it loses the richness of fatherhood and motherhood. And our homelands suffer because they do not have children,” he added.

Among those present at the audience, which was held in the Paul VI audience hall, were members of Rome’s Rony Roller Circus troupe, including jugglers, acrobats, dancers and clowns, who performed for the pope and the pilgrims present. 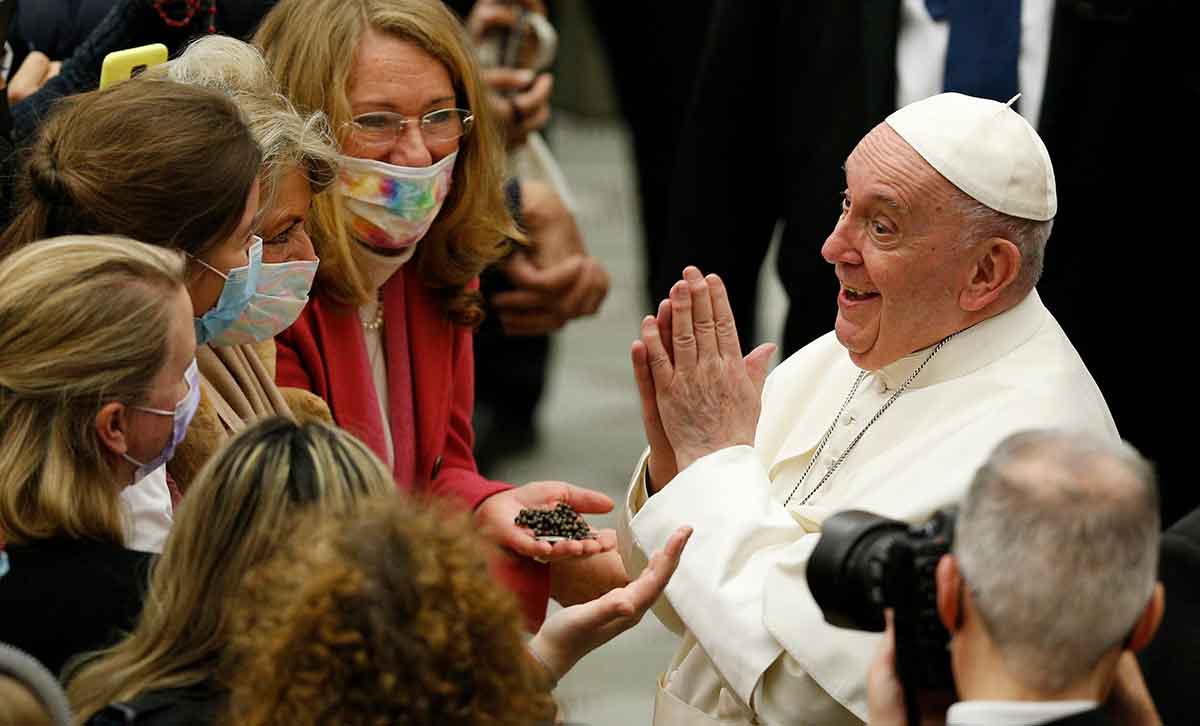 Pope Francis gestures as he greets people during his general audience in the Paul VI hall at the Vatican Jan. 5, 2022. (CNS photo/Paul Haring)

“I thank the young men and women who have performed this show,” the pope said. “It is a show that puts us in contact with beauty, and beauty always lifts us up, beauty makes us go beyond. And beauty is a path to the Lord.”

In his main talk, Pope Francis continued his series on St. Joseph, reflecting on his role as Jesus’ foster father.

In recognising Jesus as his son, St Joseph shows that “a man does not become a father simply by bringing a child into the world, but by taking up the responsibility to care for that child.”

St. Joseph, he continued, also teaches the value of fatherhood and motherhood, especially by those who “welcome life by way of adoption,” and “shows us that this type of bond is not secondary; it is not an afterthought.”

“This kind of choice is among the highest forms of love, and of fatherhood and motherhood,” the pope said. “How many children in the world are waiting for someone to take care of them! And how many spouses wish to be fathers and mothers but are unable to do so for biological reasons; or, although they already have children, they want to share their family’s affection with those who have been left without.” 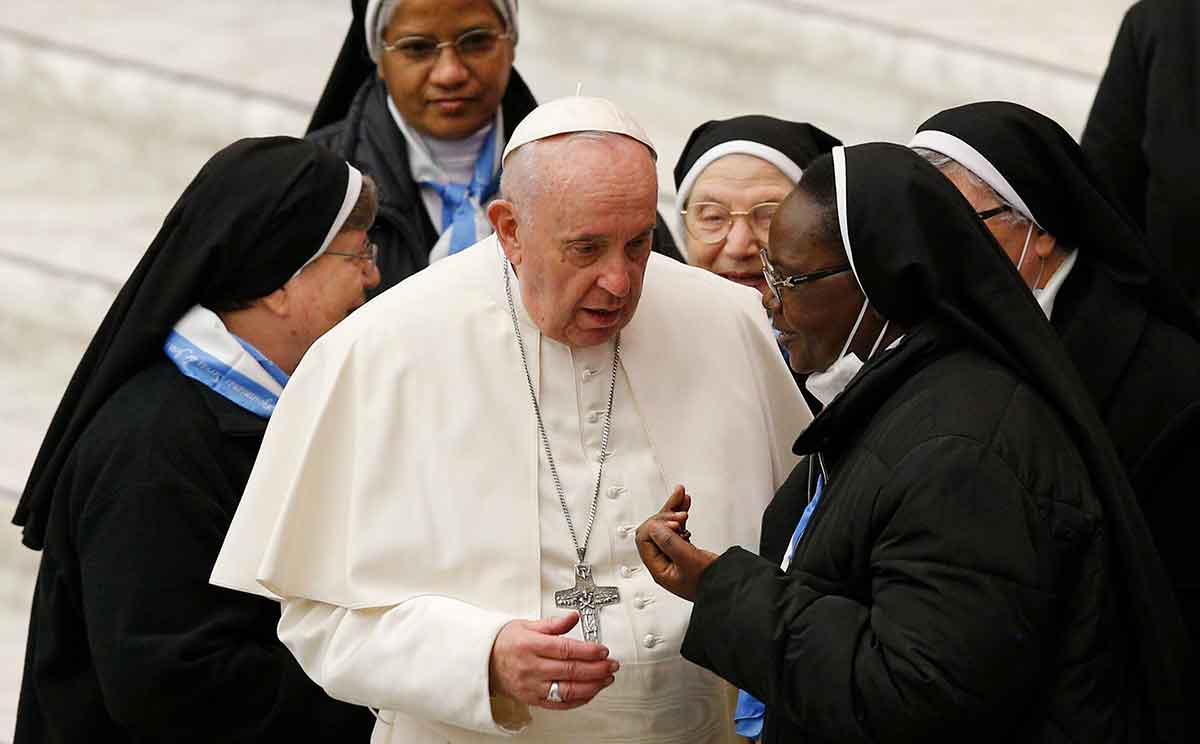 Pope Francis talks with a nun during his general audience in the Paul VI hall at the Vatican Jan. 5, 2022. (CNS photo/Paul Haring)

Speaking off the cuff, the pope said that the example of fatherhood and motherhood was an important value to think about because “our civilization is something of an orphan.”

Pope Francis encouraged couples, especially newlyweds to “think about having children, giving life, because they will be the ones who will close your eyes (at death), who will care for you in the future.”

“And if you cannot have children, think about adoption. It is a risk; yes, having a child is always a risk, either naturally or by adoption. But it is riskier not to have them. It is riskier to deny fatherhood or to deny motherhood, be it real or spiritual,” the pope said.

As he has been doing since beginning his series on St. Joseph, Pope Francis read a prayer he had written.

He asked St. Joseph to “be close to the many children who have no family and who long for a daddy and mommy,” and to “support couples who are unable to have children.”

“Make sure that no one lacks a home, a bond, a person to take care of him or her,” he prayed. “And heal the selfishness of those who close themselves off from life, that they may open their hearts to love.”