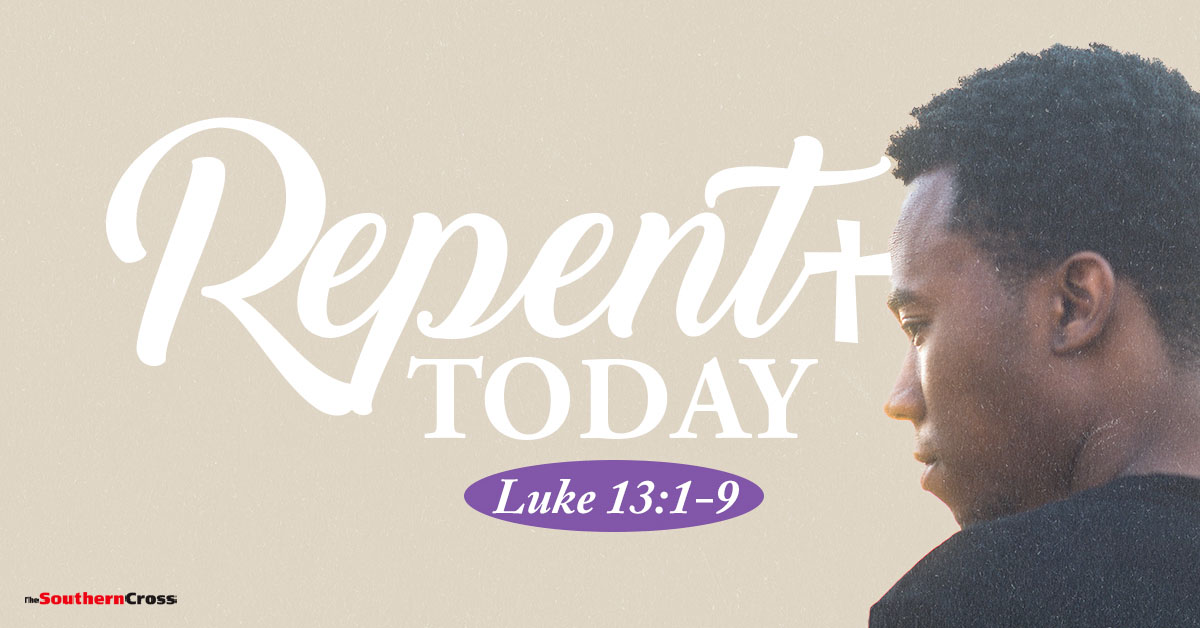 Theme: We are in spiritual wilderness: A need for Repentance!

Point of Reflection: How do I react to spiritual dryness and desolation in my spiritual life? Do I look for an easy way out or trust God to lead me on my way of the cross through life? The readings of the third Sunday of Lent reflect on the image of the spiritual wilderness and an act of repentance. Do you think that because these Galileans suffered in this way they were worse sinners than all other Galileans? No, I tell you; but unless you repent, you will all perish just as they did.”

Sermon (Reflection): Repent now! Otherwise, you will perish. The Gospel reading of today begins by narrating two random and tragic events. The first was a massacre of a group of innocent Galilean pilgrims by Pontius Pilate. The second was a sudden collapse of the Siloam tower in Jerusalem, which killed eighteen bystanders. The victims in both cases were unsuspecting people unprepared for death. This reminds me of Ukraine­Russia today.  The second part of the passage contains the story of a barren fig tree that the owner wants to cut down. The gardener, who represents Jesus, pleads with the owner to give the tree one last chance to bear fruit and then spares no effort to help the fig tree to become fruitful.

These two stories together convey a clear message directed particularly at those who witnessed Jesus’ ministry, heard his words, saw his deeds, and yet remained undecided as to whether to believe in him or not. They lived in the “spiritual wilderness” of indecision, which means being unprepared for death, just like the Galilean pilgrims and the bystanders in Jerusalem. Today it is us living who have heard the Word of God but not living by it, this is spiritual wilderness.

This state of suspense and unresolved resembles the barrenness of the fig tree in Jesus’ story. The way out of this spiritual paralysis and towards fruitfulness leads through the acceptance and the following of Jesus as God’s Messiah. Any other path will eventually end with unanticipated destruction. A decision for Jesus cannot be delayed.

Those who make their way out of the spiritual wilderness can truly rejoice with the Psalmist and confidently say, “bless the Lord, O my soul, and all that is within me, bless his holy name.”

The first reading narrates an important story where God chose to disclose his name to Moses. Moses was going through a difficult time. Disowned and rejected by his fellow Israelites, he has fled his home, Egypt, to become a wandering shepherd, tending somebody else’s flock in the wilderness. In this desolate location, Moses saw a bush that was burning, and yet not consumed. Approaching this unexplainable phenomenon, Moses heard a voice instructing him to take off his sandals because he was standing on “holy ground”, that is, in God’s presence. God then identified himself as the God of Moses’ father and his distant ancestors, the patriarchs.

This was the same God who called Abraham to be the father of the Israelites, and who was now fully aware that they were about to be annihilated in Egypt. God told Moses of his decision to deliver the Israelites from the hands of their oppressors and to give them a land of their own. Each one of us as Christians, in one way or another, we are Moses, we need to make a decision of repentance of delivering our own sins and help others too to deliver their sins and the sins of this world.

During this Lenten season, we are on a mission of repenting, so that, on EASTER we be better people in the society and communities we live.

The second reading of today comes from Paul’s instruction to his troublesome community in Corinth. Paul addresses the issue of Christians consuming food that had been offered to idols in pagan temples. Some Corinthians insisted on their right to consume such cheaply and widely available food because they “had knowledge” that no other gods exist (cf. 1 Cor 8:4-6). Others, however, were scandalised by such behaviour, seeing it as an act of idolatry. This brought divisions and tensions in the community. Paul agreed that food offered to idols can be eaten because they are not real. However, he also insisted that all should abstain from such food not to offend and scandalise others and to maintain the unity in the community (cf. 1 Cor 8:7-12; 10:23-30).

Through the reminders outlined in the second reading of today, St Paul warned his overconfident Corinthians that careless partaking in the food offered to idols exposes them to the danger of falling back into paganism. Before their conversion they were in the “spiritual wilderness”, believing in non-existent gods and participating in pagan feasts and rituals. They had been led out of that wilderness through the revelation and the gift of faith in the one true God. They must carefully safeguard this gift by shunning all forms of idolatry, lest they be drawn back into it. During this Lenten period let us refrain from acts of idolatry worship.

Christian Act in Word of God “An Act of Repentance & Prayer”

There is a time of wilderness in every epoch of human history both on the individual and communal levels. It is often characterised by emptiness and a feeling of abandonment. Let us think of people of Ukraine today? Do they deserve such killings? Where has human conscience gone wrong? We need more prayers. Prayer gives answers to all these questions in God’s time..

One of the fundamental characteristics of a person of faith is repentance. True repentance shows forth in good works of faith. With the aid of the parable of a fig tree, Jesus challenges us to give evidence of repentance. To repent is to accept God’s rescue plan of salvation. He so loved the world that he gave his only begotten son that whosoever would believe in him would not perish (cf. John 3:16). Jesus Christ is the embodiment of God’s rescue plan for every human being. Therefore, unless we repent and believe in him, and we show it by our good works that help to save the world even on the smallest scale, we have no reason or right to question where God was when the world was drowning in misery.

There are indeed many dark spots in our world. However, there is a saying that “it is better to light a candle than to curse the darkness.” When we repent and place our faith in Jesus, we light a candle of faith that wards off the darkness in our hearts and the world.

Action: I will repent my sins from today.

Prayer:  Eternal Father, we recognise that we are in spiritual wilderness, and in today’s Gospel You have told us to repent. During this Lenten season, the most important act we need to do is to repent and to follow you. May you send your Spirit to help us recognise our sins and repent for the Kingdom is near. We also pray for peace and harmony in Ukraine­-Russia as we are in physical wilderness, we ask this through Christ our Lord, Amen.