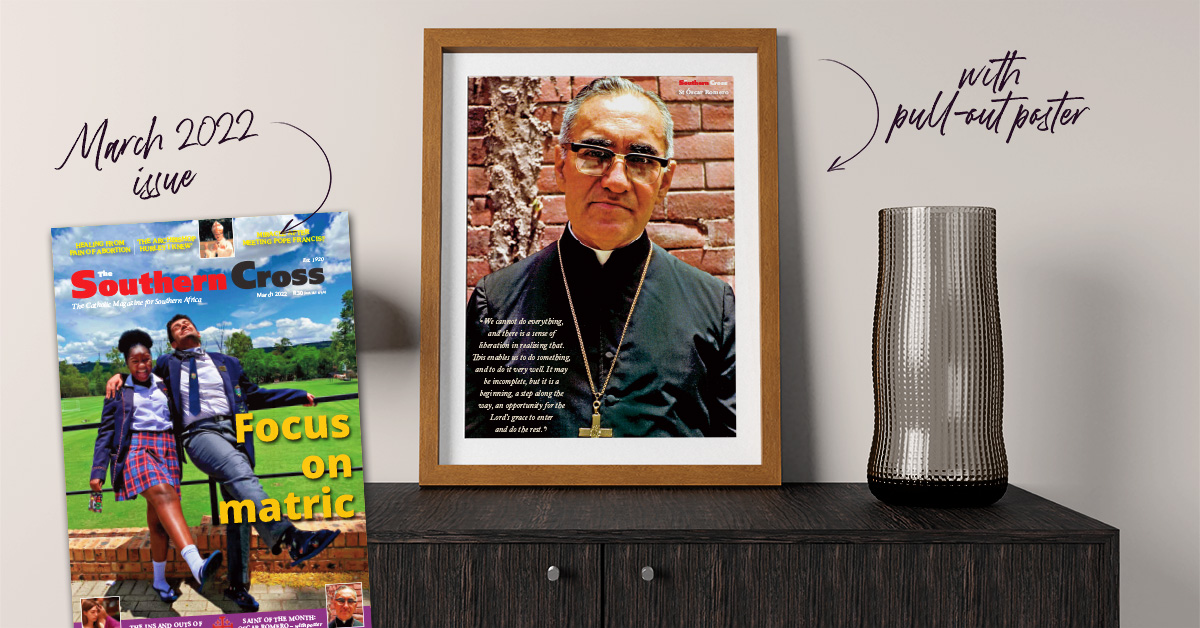 Our Saint of the Month in this issue will be popular with many people. Even 42 years after he was assassinated while celebrating Mass, Archbishop Oscar Romero still teaches us that Church and politics must mix when politics acts with injustice — as it so often does. The life of St Oscar Romero calls us to conversion towards obedience to Christ’s demand for justice.

If one can find it, the 1989 film ‘Romero’ tells the story of the martyr well. In it, the archbishop was played by the late actor Raul Julia, who was raised Catholic but later lapsed in the faith. Reading about Romero in preparation for his role brought Julia back into the Church.

The Church is full of heroes like Romero. Some are well-known and fondly remembered. Archbishop Denis Hurley, who became the bishop of Durban 75 years ago on March 19, is one of them. This month we read about Hurley in a reflection by his Oblate confrere Bishop Sylvester David, as well as in Raymond Perrier’s column. The always delightfully readable Raymond aptly calls Hurley, Romero and the recently late Desmond Tutu the “Three Golden Arches”. In an article by Fr Oskar Wermter SJ, we also read about the great social activist Dorothy Day, whose sainthood cause is underway, possibly to her dismay. She once said: “Don’t call me a saint. I don’t want to be dismissed that easily.”

By proxy, we also celebrate this month the many other disciples of Christ who serve the Lord and his people in education. The panel adverts in this issue showcase the successes of several independent Catholic schools. These schools, their staff and learners merit our admiration for successfully navigating the colossal challenges faced over the past two years of the pandemic. But as we look at the photos of the high-performing matriculants, let us think also of the many others in the Catholic school system who beat the impossible odds — with a pass rate of almost 86% in the state exams, as Anne Baker explains in her insightful article on page 10 — to secure a good matric, and with it the hope for a bright future.

The Catholic Church’s education system in South Africa comprises around 350 schools, most of them located in townships and rural areas. As it is with the Catholic primary health care system, most of these schools serve poor communities. If the Catholic Church were to pack up and shut all its operations, South Africa’s education and health systems would collapse (as it would in many other countries, even in more developed places such as Ireland).

Without a doubt, despite all the deplorable failures of people within it, the Catholic Church is a force for good in the world. Many people forget that truth when they think of the Church only as the institution run by powerful, often flawed men. The ceaseless stream of revelations of the abuse scandal and its cover-ups, now also implicating Pope Emeritus Benedict XVI, are shaking many people in their faith, even driving great numbers from the Church.

Indeed, by citing the failures of leaders as a reason to leave the Church, one is unjustly dismissing the selfless service of those faithful Catholics who are doing great things. When they ask, “How can I remain a member of that Church?”, then they haven’t really tried to find the answer. But it is right there!