Oberammergau’s Season of the Passion 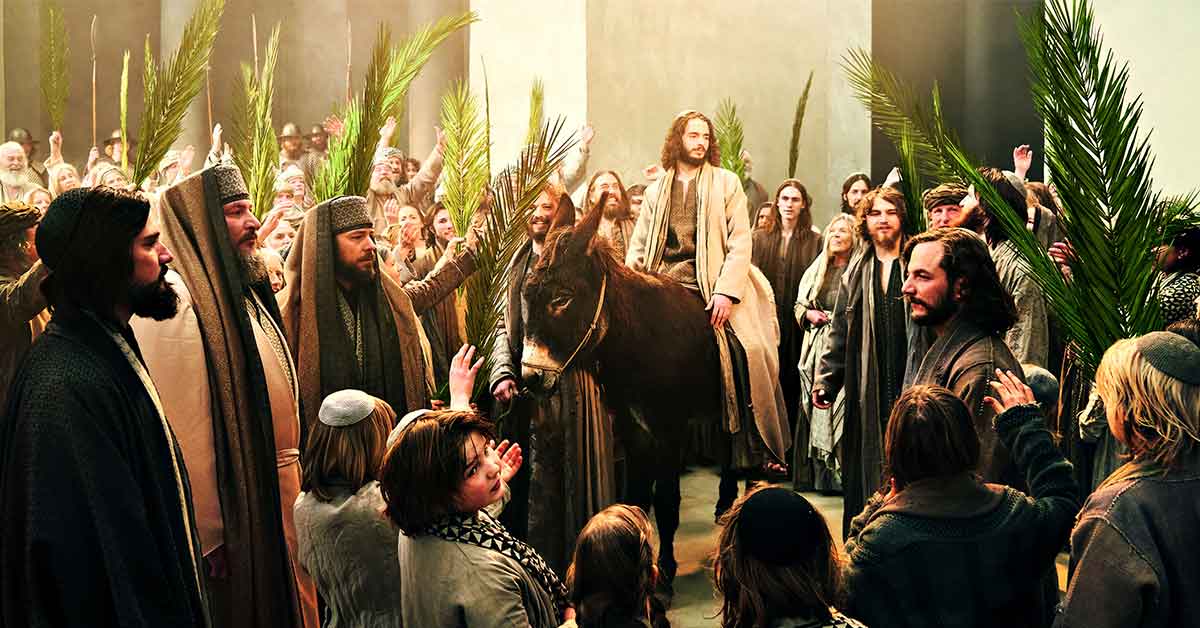 The Bavarian village of Oberammergau performs the world’s most famous Passion Play, as it will this year — and only locals may take on roles. Günther Simmermacher looks at Oberammergau.

In 1633, at the height of the Reformation, the Black Death was sweeping through Europe, including the southern German region of Bavaria. The terrified people of one small village decided to do something to protect themselves from this lethal pandemic: by way of collective prayer, the villagers vowed to perform every ten years a Passionsspiel — a play depicting the Passion of Christ — should their hamlet be spared.

The pandemic indeed spared the village of Oberammergau, and on Pentecost the following year the villagers staged their first Passion Play, at the town’s cemetery. It has been performed by the villagers at regular intervals ever since, most recently in 2010, and by now in a big, semi-covered theatre, built in 1928.

In 2022, some 389 years after that pandemic, Oberammergau is ready to stage another Passion Play, at a time which the world is hoping will mark the end of another pandemic. Starting on May 14 and running till October 2, five days a week, the Passion Play was originally planned to be performed in 2020; but Covid lockdowns put paid to that. With foresight, the organisers decided to delay the play for two years.

Oberammergau, which is near the winter sports resort of Garmisch-Partenkirchen, subsists on the revenue of the play and the associated tourism. While those who put on and act in the play are driven by piety and local pride, the organisers of the modern Oberammergau Passion Play are motivated by economics, employing ethics in that pursuit which would not be out of place in the Temple in Jerusalem 2000 years ago.

And they can afford to be cut-throat. Performances are sold out well in advance. In 2010, half a million people attended 102 performances. One day fights broke out at the box office when 300 people came to compete for 40 available tickets. Many of these multitudes come from afar, and they must sleep somewhere, eat, drink, buy souvenirs. The whole region around Oberammergau benefits (presumably also Unterammergau, the sibling that is no less picturesque but whose villagers neglected to strike what would turn out to be lucrative deals with God).

The souvenir shops are plenty, and the village’s world-famous woodcarvings are popular with visitors. But caveat emptor! Not all wood carvings on sale are produced in Oberammergau; some are made in China. Just as in the Holy Land, where pilgrims have to watch out that their souvenir olive wood rosaries are made locally, so it is in Oberammergau. Still, the souvenirs are generally of reasonable quality and price, and the commercialism falls just on the bearable side of frenzied crassness.

But it would be unjust to dismiss the Passion Play as a purely commercial exercise. The Catholic faith infuses the air in Oberammergau, as it does throughout the region (most of Germany’s remaining 21 Passion Plays are performed in Bavaria). The sincerity of those who take part should not be doubted. Only locally-born people or residents of at least 20 years may act in the play (musicians and members of the chorus may be drawn from surrounding areas). The cast also includes animals, which need not be local. In 2010, a horse, a donkey, three sheep and, marvellously, two camels took to the stage in Oberammergau. 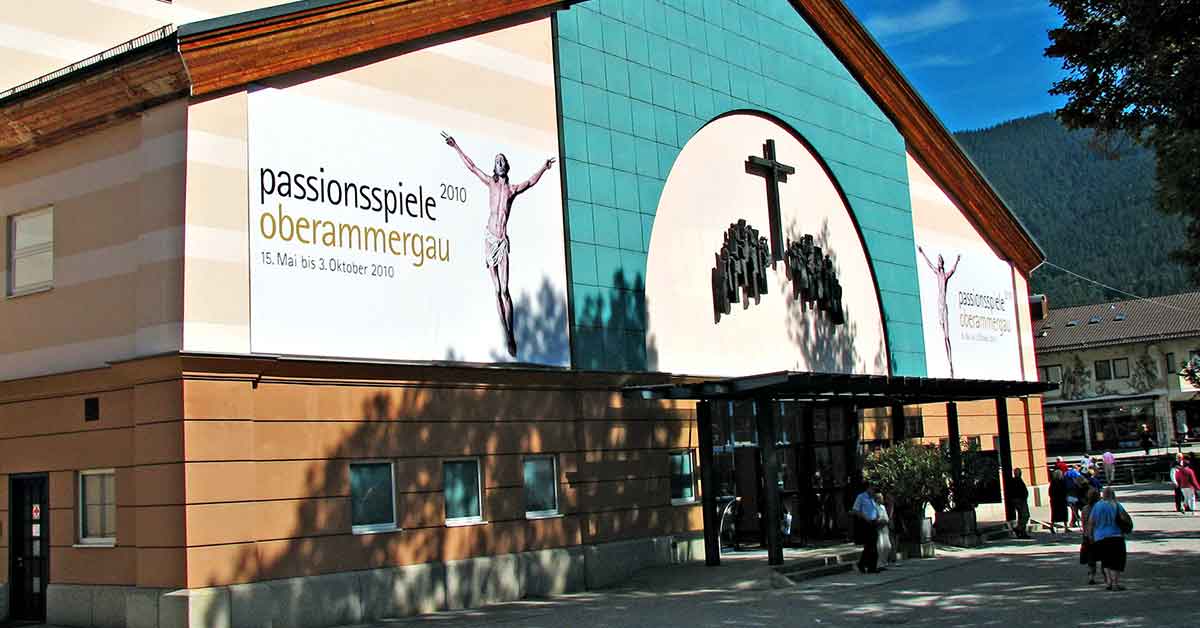 Labour of love and faith

For the 2100 villagers who take part (from a population of 5400), it is a labour of love and, for many, an exercise in evangelisation. There is not much in it for most of them, but the sacrifices are many. Some actors take unpaid leave to take part. Outside the leading roles, the actors don’t earn much. And there are fines for transgressions, such as laughing on stage.

In return for their modest remuneration, the cast members invest many hours of practice every night from January to the curtainraiser in May. Then there is all the time they stand on stage, or behind the scenes as they await their sometimes brief time in the limelight. The men must change their appearance, growing long hair and beards — by promulgated decree of the mayor. The actors who portray Christ, the disciples, and the judges of the Sanhedrin all look like hippies, in a region where people don’t tend to look like hippies. Since Ash Wednesday 2021, they have let their hair grow. Usually, the Ash Wednesday in the year preceding a Passion Play is also the last chance for a shave. But to allow for the comfortable wearing of Covid facemasks, the beard decree initially was not strictly enforced.

Everyone, from the leads — all of them cast with two alternating actors — to the ushers, has known since November 2018 what their role will be. One of the two Jesuses, Frederik Mayet, a 41-year-old art director at a Munich theatre, had already played that role in 2010 — also on the day when a group of Southern Cross pilgrims saw the Passion Play in September that year. Years before that, he played the disciple John (and 2010’s John has been promoted to the role of Judas in 2022). And before that Mayet participated in one of the roles for children (in 2010, some 500 children took part).

This year’s alternate Jesus is Rochus Rückel, at 25 the second-youngest actor to play the part in the Passion Play’s almost 400-year history. On the other hand, the two actors playing Annas, Caiaphas’ ruthless father-in-law, have been performing in the play since 1950. 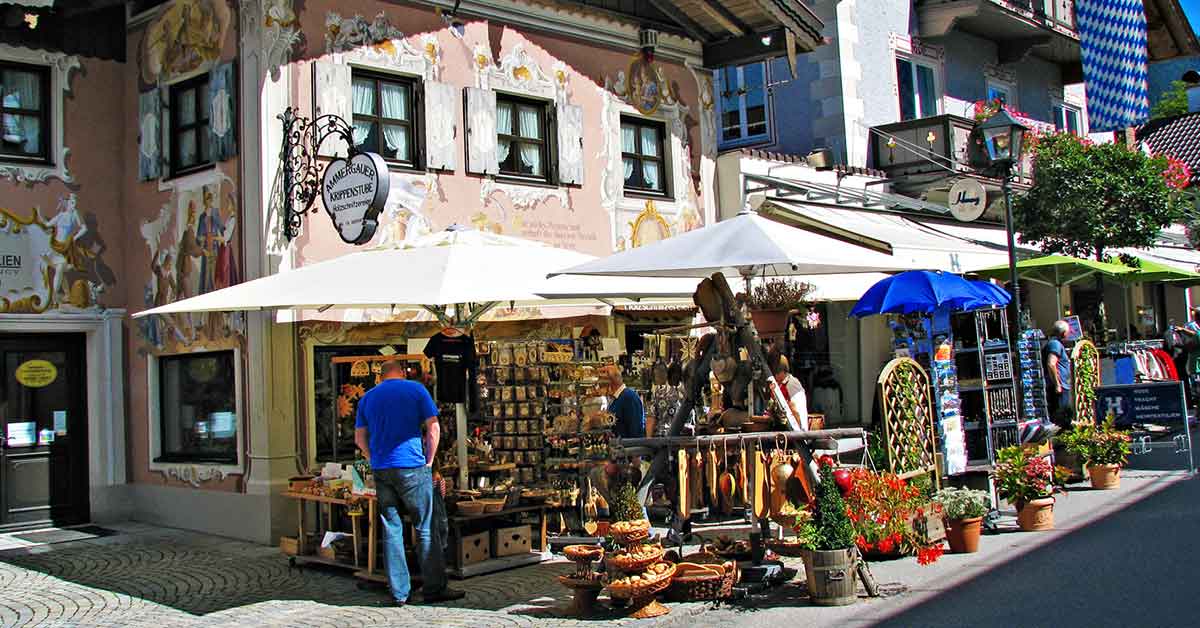 Oberammergau didn’t invent Passion Plays. These were widespread in medieval times, performed throughout the German-speaking region as well as in countries such as France, Italy and England. Before and for long after Oberammergau’s villagers made their plague-avoiding bargain with God, the most famous Passion Play was that of Benediktbeuren, also in Bavaria, the first known script of which was written in 1300. The oldest complete script of a Passion Play dates to the 14th century.

With the Reformation, in most parts of Germany Passion Plays fell out of common usage, but in the solidly Catholic Bavarian Alps and Austria they became increasingly popular. It was in that context that the Oberammergau play was born, along with 40 others in the region between 1600 and 1650.

Oberammergau gained a measure of pre-eminence in 1750 when its script was thoroughly reworked by the Benedictine Ferdinand Rosner of the nearby Ettal Abbey. That script was adopted by other Passion Plays throughout Bavaria. When in 1780 Passion Plays were banned in Bavaria — the beginning of a creeping process of anti-clerical secularisation that would culminate in the nationalisation of monasteries — Oberammergau’s was one of two plays that were given an exemption. This near-monopoly helped establish Oberammergau’s Passion Play, and in the mid-19th century it began to attract international attention and increasing popularity.