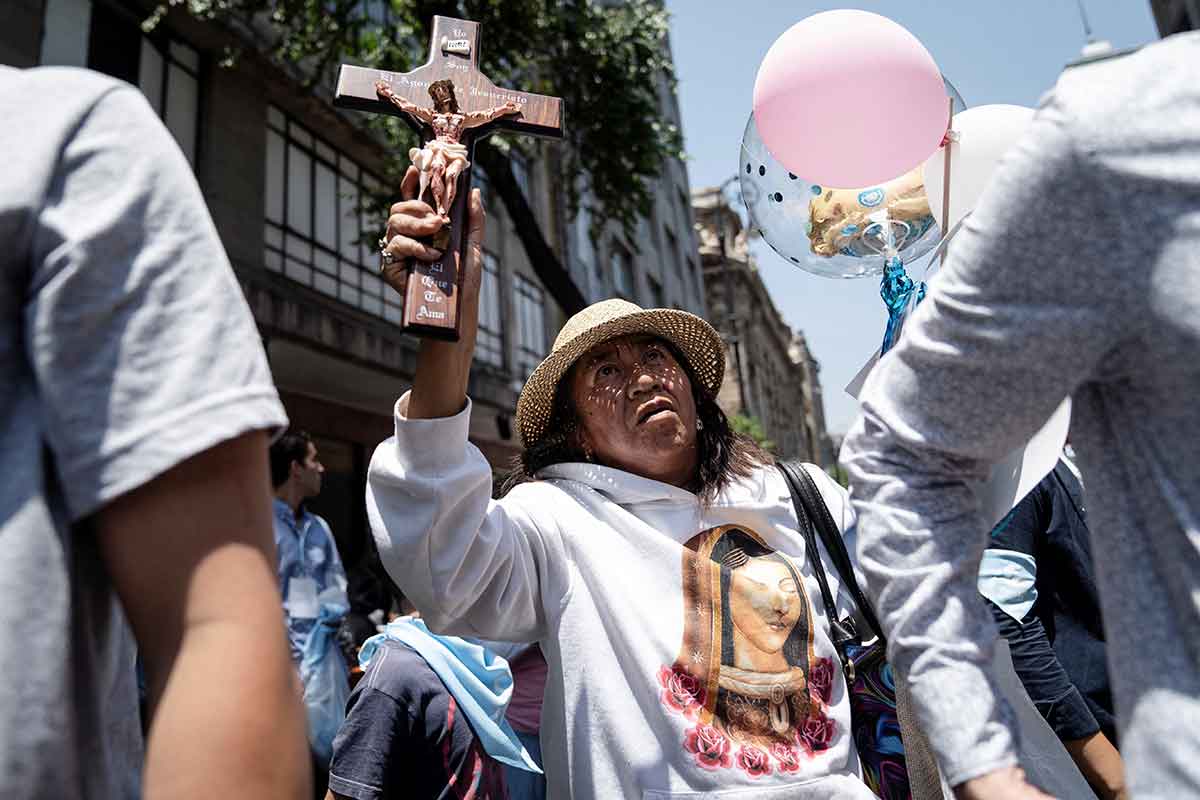 A woman holds a cross as she takes part in a “March for Life” against abortion, in Mexico City on May 7, 2022. Mexico’s Supreme Court has upheld a health rule allowing abortions for minors in cases of sexual violence. (CNS photo/Toya Sarno Jordan)

During one of the many nonviolent, prayerful pro-life/anti-abortion demonstrations I participated in, a woman stopped her car, got out, pointed to the large gruesome poster I was holding, and emotionally asked. “What is that?” I told her it was an actual photo of a dismembered aborted unborn baby. With surprise and horror, she said, “Is that what abortion is?”

That woman’s shocked response, pointed not only to her lack of understanding about the truth of what abortion really is – the barbaric dismembering and killing of little human babies who are forbidden from seeing the light of day – but also pointed to the fact that millions of abortion supporters, also, do not really understand the brutal hidden truth of abortion. They choose to ignore the truth, and instead, believe in catchy slogans.

The recent “Bans off our Bodies” events in numerous U.S. cities –protesting the U.S. Supreme Court’s upcoming probable overturning of the infamous 49-year-old court decision that legalised abortion throughout all nine months of pregnancy –reveals a critical lack of the understanding of scientific knowledge which teaches that human life begins at conception.

An unborn baby is not a part of a woman’s body. But is a new human life, totally separate from the mother’s body. And while the baby in-utero needs the support of the mother’s body as he or she develops, nonetheless, the baby and the mother are positively two separate human beings. Thus the “Bans off our Bodies” slogan is a deadly form of disinformation.

Every single abortion kills a baby. Period. That is not an opinion, a questionable statement, or a lie. It’s the truth. A truth backed with solid, indisputable scientific evidence.

There are several abortion methods, each one designed for the same purpose: to kill an innocent unborn human baby. The American Life League provides comprehensive texts on abortion methods, along with three short important videos narrated by Dr Anthony Levatino, an obstetrician-gynaecologist and former abortionist (see: https://www.all.org/abortion/abortion-methods).

Years ago, I attended a pro-life conference hosted by Americans United for Life (see: https://aul.org/) where the late highly distinguished French paediatrician and geneticist Dr. Jerome Lejeune – who discovered the extra chromosome that causes Down Syndrome – was the keynote speaker. After his presentation, I asked him a most important question. I said, Dr. Lejeune, when does human life begin? And with his beautiful French accent he said, “At conception, of course.” And I followed up by asking him if any of his colleagues disagreed with him. He replied, “No, we all know when life begins. But we don’t agree as to when life deserves protection.”

For Lejeune, a devout Catholic who has been declared “Venerable” by Pope Francis, it was logically and morally crystal clear that human life deserves protection at the beginning. That is, at conception!

Every single baby – born and unborn – is a wonderful, unique, unrepeatable gift from the Creator. All we need do is open our eyes, minds, and hearts.

Check out the compelling story and photo of tiny Samuel Alexander Armas reaching outside his mother’s womb to hold onto the finger of his surgeon (see: https://www.justthefacts.org/samuel-armas/), and … believe!