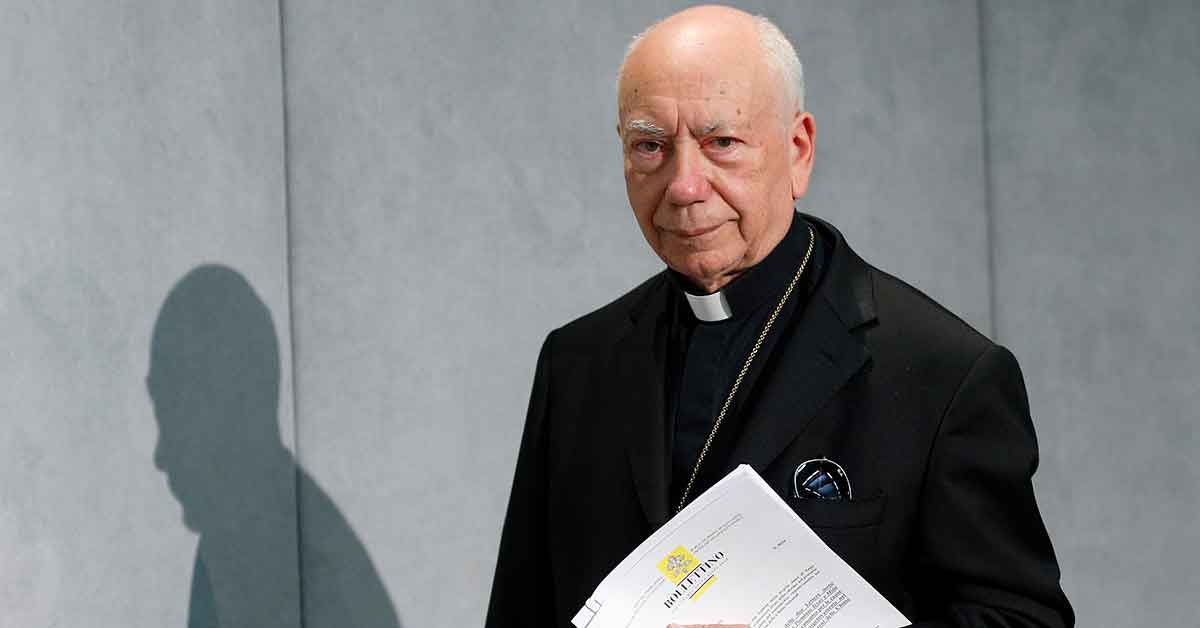 Cardinal Francesco Coccopalmerio, then-president of the Pontifical Council for Legislative Texts, arrives for a news conference at the Vatican in this Sept. 8, 2015, file photo. Cardinal Coccopalmerio’s new book in Italian on synodality was presented at the Vatican on May 20. (CNS photo/Paul Haring)

By Carol Glatz – As the Catholic Church continues to reflect on synodality through a two-year process of listening and dialogue, a panel of six notable theologians and canonists discussed the nature of consultation and decision-making in a synodal church.

The discussion took place May 20 at the Vatican’s Palazzo Pio during the presentation of a new book released by the Vatican publishing house and written by Cardinal Francesco Coccopalmerio, retired president of the Pontifical Council for Legislative Texts, the office charged with interpreting canon law.

The book, released only in Italian, is titled “Synodality with ‘Limited Responsibility’ or from Consultative to Deliberative?” It proposes that synodality be seen as the communion of priests and faithful who strive to seek and discern the good of the church together so that decisions to achieve that good could be made. It proposes there be greater discussion about the lay faithful participating not just in the consultative process in the life of the church, but also in the decision-making phase.

The panellists agreed there was a difference between the process of decision-making as a joint exercise of discernment, consultation and cooperation, and the authority of decision-taking, which is the competence of the bishop, according to the papal-approved document published by the International Theological Commission in 2018 on “Synodality in the Life and Mission of the Church.”

One of the speakers, Cardinal Mario Grech, secretary-general of the Synod of Bishops, said Cardinal Coccopalmerio’s reflection “does not repudiate or threaten authority,” whether it be of the bishop, the clergy or any leader in the church.

“Rather, it is asked that authority always be involved in the process of expressing without fail one’s opinion and to pay careful attention so that there be authentic discernment,” Cardinal Grech said.

In this way, the progressive process of decision making is never about going against or without the person of authority, but always together with that person and with his consent, he said, explaining Cardinal Coccopalmerio’s reflection.

This process of “communitarian discernment,” in which clergy and the faithful “are united in the common listening of the Holy Spirit,” is not easy, Cardinal Grech said; but there are analogous examples, such as how the college of bishops is called to always exercise authority together and with the approval of the pope.

It is a “spiritual process” that does not pit clergy and laity against each other, but involves each person being “with” the others in the church with the shared desire to listen, deliberate and determine, he said.

It is a church that does not function like a monarchy or a parliament but is a church of clergy and lay people united in their common baptismal identity and bringing their different ministries and charisms together to discern and plan, Cardinal Grech said.

Msgr. Severino Dianich, a theologian and expert on ecclesiology, said this kind of reflection is critical.

In Italy and perhaps in other parts of the world, he said, “there is a notable sense of frustration that must be recognized in how councils are actually working, whether they be diocesan or parish” councils.

There is a sense that “journeying together” means a journey that goes just halfway, because when it comes time to make a decision, it can seem that the bishop or the priest continues the rest of that journey all on his own, the priest said.

It is a concern that theologians and canonists must discuss, he said, especially in addressing objections to greater lay involvement, such as fears it will turn into “a fight for positions of power.”

Msgr. Dianich said he sees just the opposite.

All Christians are “rich in charisms” that are different for clergy and laity, so when “a priest decides alone, he is in fact impoverished.”

The deliberative process of the church community “is nothing more than enriching the hierarchical ministry” with gifts and charisms that can serve each individual bishop or priest, he said.

Pope Benedict XVI acknowledged this, he said, in a 2011 speech discussing St. John XXIII’s encyclical “Mater et Magistra.” The priest quoted the retired pope’s text, saying the lay faithful “cannot be solely passive beneficiaries but are the protagonists of the church’s social doctrine at the vital moment of its implementation. They are also valuable collaborators of the pastors in its formulation, thanks to the experience they have acquired in the field and to their own specific skills.”

One reason there is greater awareness and desire for the church to be more synodal, Msgr. Dianich said, is because the church is rediscovering its “fundamental original purpose,” which is that it exists, not for itself, but to evangelise.

It has become clear, he added, that the most important evangelisers – besides the pope – are the people “in the peripheries and part of everyday life,” he said. The lay faithful are the ones who “are surrounded by” and directly encounter on a daily basis those who have yet to encounter Jesus and can immediately give witness to the Gospel in action, he said.

Cardinal Coccopalmerio said his proposals are very rudimentary and should be discussed further to determine their validity with the guidance of the Holy Spirit; if the ideas end up going nowhere, “at least there will have been the attempt to learn more about the nature of the church.”