Catholic News: Just Who Can You Trust? 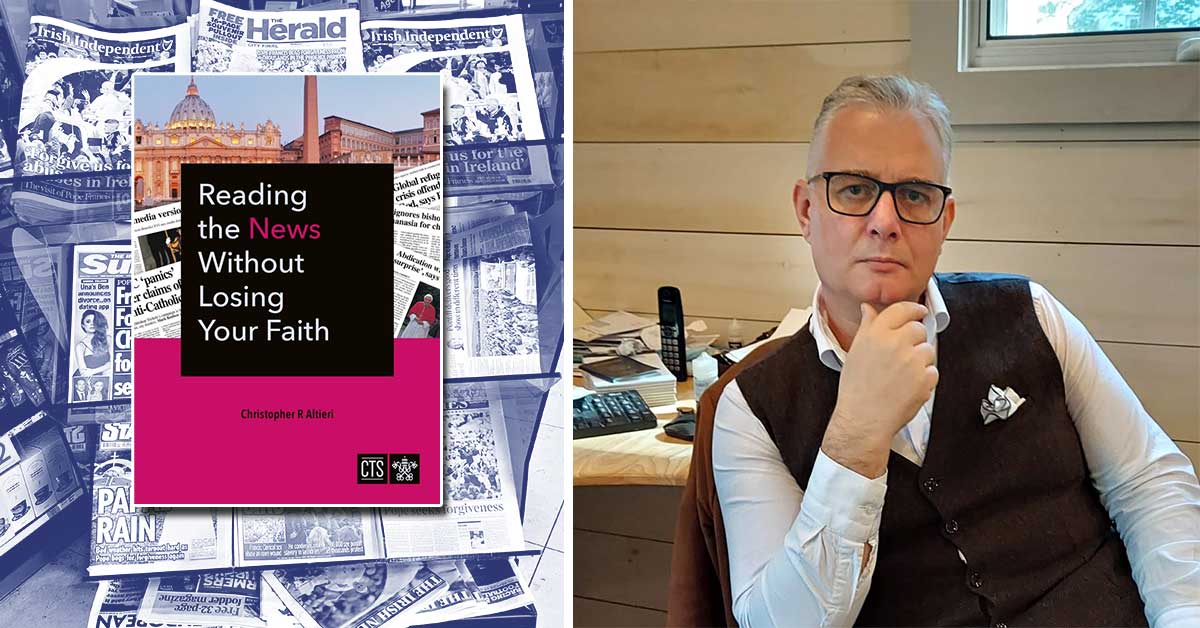 Catholics today have unprecedented access to media which offer information on the Church and the secular world. But what news can be trusted? Günther Simmermacher interviewed Catholic journalist and author Christopher Altieri on his new book Reading the News Without Losing Your Faith.

As a Catholic journalist who for many years worked in and for the Vatican, Dr Christopher Altieri is well-placed to see through the smoke and mirrors of Church politics and the reporting on these. He has put that experience to work in his latest book, Reading the News Without Losing Your Faith, which he intends to serve as a crash-course for Catholics in media literacy. 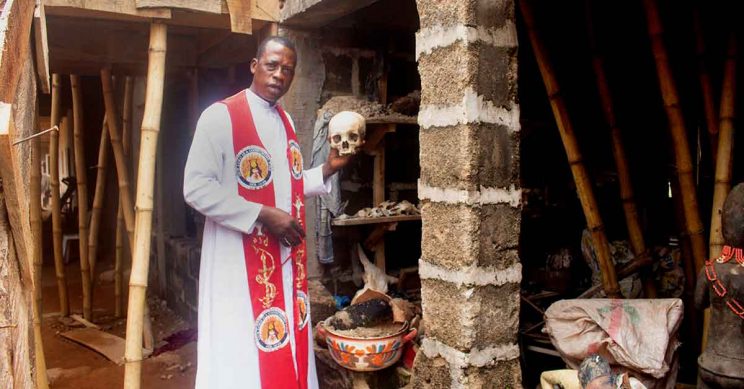 Media literacy is the ability to consume the news in a way that helps the reader to discern between truth, manipulation, incompetence and lies. This is particularly important in the digital age, where much news is not put through the rigours of an editorial process and often is patently fake (though, as we have learnt in South Africa, even once esteemed newspapers are prone to fabricating news and even telling outrageous lies).

From 2005-17, Altieri worked for Vatican Radio on its English newsdesk, which was headed by Cape Town-born Sean Patrick Lovett.

From 2018-21 the American served the Catholic Herald in various roles, including executive editor. Since 2018 he has also been contributing editor of the Catholic World Report, and has written for several leading publications

The holder of a PhD in philosophy, Altieri is a founding affiliate (external) of the Benedict XVI Centre for the Study of Religion and Society at St Mary’s University in London.

Reading the News Without Losing Your Faith, which is published by the Catholic Truth Society, is Altieri’s third book, after The Soul of a Nation: America as a Tradition of Inquiry and Nationhood (2015) and Into the Storm: Chronicle of a Year in Crisis (2020).

The 45-year-old father of two shares his time between Rome and his native Connecticut.

Q: Your first observation in “Reading the News Without Losing Your Faith” is that for much of the Church’s existence, almost no Catholic knew who the pope was. Obviously today virtually every Catholic knows. When did that change, and how?

A: I suppose it hasn’t been strictly true for several centuries. The world has been getting smaller for a good while, now. Popes really began making news headlines between the two World Wars, and especially around the time of the Vatican Council II.

How that all shook out would be a great subject for another book, but I talk a little bit about it in my book, especially in relation to Humanae Vitae. That was Pope Paul VI’s encyclical letter issued in 1968 on the regulation of human fertility. Humanae Vitae was, and still is, a very misunderstood document.

There was a media fracas surrounding its development and eventual official publication. Things haven’t been the same since. I’d say that things had already changed, and the persistent controversy surrounding the document is a sign of how much things have changed.

So we have this focal point on the papacy, but do most Catholics today actually care what’s going on in the Vatican, or in the global Church, or even in their local Church?

Yes and no. There’s always a small number of people who are very invested — on an emotional level — in what’s happening in Rome. They’re spread across the spectrum of opinion in the Church and in society.

It is also true that the majority of Catholics in many, perhaps even most, places don’t care to know what’s doing in Rome. Who’s up and who’s down, which department of the Church’s central governing apparatus, the Roman curia, has put out what document, or what the pope said — all those are things about which most general news readers don’t appear to have much concern.

That’s not a big problem, but it’s important for people – everybody, not just Catholics – to know about what the Church is doing locally.

And why should they care?

The Catholic Church is an important element in every society in which she is present, and people have a right to know what the Church is getting up to — good and bad. When it comes to the Church, everyone has skin in the game — know it or not, like it or not.

The scandals and crises get all the headlines, but why are the good works of the Church not better known?

For two reasons, I expect. The first is that scandal moves copy. That’s a fact, rooted in human nature. I hear there’s a lot of that going around. And journalism has a watchdog function to perform, too.

The second reason is that Christ tells us to do our good work in secret — by which he means that we shouldn’t call attention to ourselves when we do the good we do. And in lots of places there are good reasons not to want too much publicity in any case.

The synthesis of the two reasons is in the old scribbling adage: “Commentary is cheap. Reporting is expensive.”

But I don’t know of a single journalist who wouldn’t jump at the chance to tell compelling stories of Catholics punching way above their weight in circumstances that are frequently very trying. I talk about this in the book, by the way. I could say lots more, but my publisher wouldn’t want me to give away the store!

Returning to a previous point, we have great numbers of faithful who are not really interested in Church affairs, but also some Catholics who are very invested. And among those, there are some who are fuelling partisanship and division. Lately even Pope Francis weighed in by criticising certain sections in the Catholic media. What is the Catholic in the pew to make of all this?

The pope is a powerful man, and Pope Francis is a powerfully charismatic leader. His record of leadership is as amenable to criticism as any other leader’s. A wise leader will distinguish the misplacement or poor articulation of a critique from the substance of the complaint. The substance will often be reasonably founded. Complaints are often legitimate, even when the complainers express them unreasonably.

At the risk of psychologising, that’s what seemed to me to be happening in the episode to which you referred in your question.

In the book, I quote John Adams, who was one of the “Founding Fathers” of the United States. He said something to the effect that citizens have a right to know about the character and conduct of their rulers. The Church is a power structure — at least, she has a divinely given hierarchical power structure — and that means that the faithful have a right to knowledge of the character and conduct of their rulers in the faith.

That’s also a big part of the answer to your earlier question about why it is important for Catholics to know what’s doing in the Church.

Especially in this digital age of clickbait on the Internet and diminishing expertise in religious matters in print newsrooms, how can Catholics know whether reporting, especially on the Church, is a fair reflection of the facts?

The short answer: To read widely and critically — to push back against our willingness to buy into narratives that fit our basic premises about the world and the figures about whom we’re reading. We also need to be more suspicious of “reporting” that paints the powerful people we do like in a sympathetic light.

Each of us, and all of us together, can decide — today — to look critically at the people and the ideas and the views with which we tend to agree.

Is “turning off the Internet” for news a realistic option?

Father Antonio Spadaro, a Jesuit, wrote a very helpful book some years back, called Cybertheology. Basically, he argued, with great depth of insight and quite convincingly, that the Internet is not a thing we use but an integral part of the environment. Digital media are part of the weave of the world, in other words.

So, the short answer to your question is: No. It is important for us to adapt our thinking so we can bring the part of the answer that says why it is not a realistic option more clearly into focus.

What can the Church do to foster the kind of media literacy you are advocating?

I think I’d reframe the question to ask what Catholics can do to foster media literacy. At risk of sounding like a particular group in the Church: We are the Church.

One thing we need is a sort of Catholic ProPublica…

We have something like ProPublica in South Africa: AmaBhungane, which means “dung beetle”…

An independent, non-profit investigative news outfit that works to expose abuse of power and betrayal of public trust.

A Catholic ProPublica — or indeed a Catholic AmaBhungane —  wouldn’t be an initiative solely or even primarily dedicated to muckraking. I’ve never met anyone on the Church beat who wouldn’t love to have funding for deeply-researched reporting on people and issues close to home and around the world, or the chance to tell stories of Catholics doing all kinds of good, mostly on a shoestring, often without a “by your leave” from the institutions of the Church and society.

Polarisation in the Church also finds expression in its various media. Is the Catholic media trustworthy?

But I certainly don’t agree with every editorial or opinion piece you publish. I’d be very concerned if I did.

And so would we!

Publications best serve their readers when they offer a broad range of opinion and let the readership make up their own minds. At the same time, a publication’s editorial line shouldn’t make much difference when it comes to straight news reporting.

Order Reading the News Without Losing Your Faith from the Catholic Truth Society at or via online bookstores.

Tags: Christopher R AltieriReading the News Without Losing Your Faith