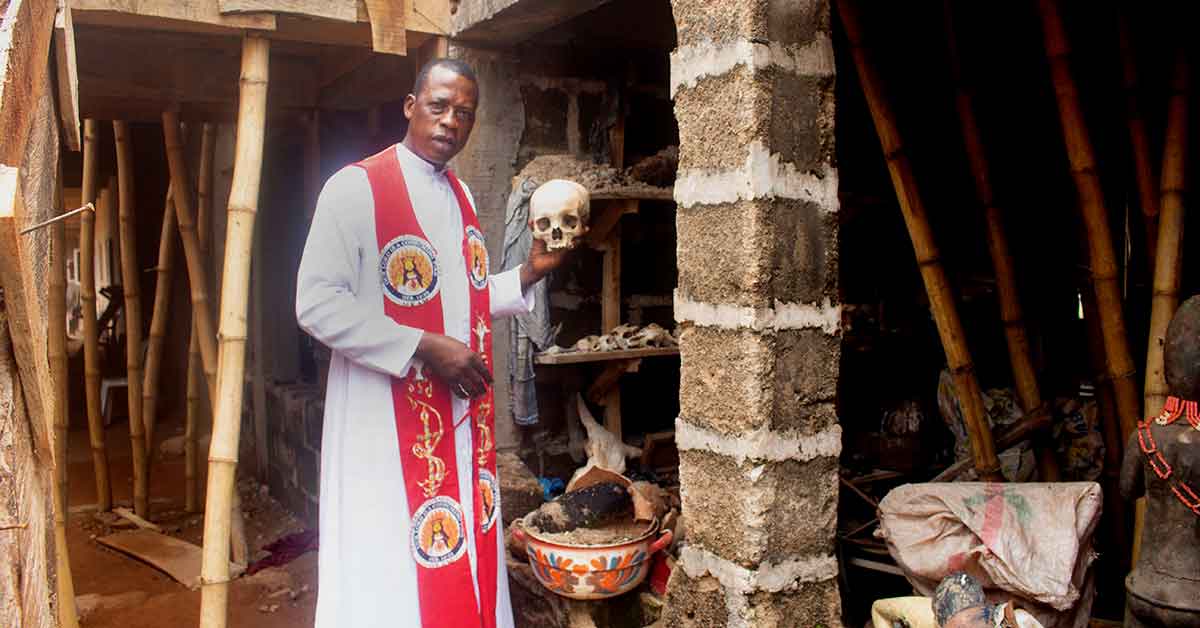 Father Paul Obayi holds a human skull retrieved from a shrine where he performed an exorcism, in this April 19, 2022, photo in Nsukka, Nigeria. Father Obayi, a designated exorcist, is preserving traditional religious artefacts in a museum, to keep the local cultural heritage. (CNS photo/Valentine Iwenwanne)

By Valentine Iwenwanne – A Catholic priest and designated exorcist is preserving traditional religious artefacts in a museum, to keep the local cultural heritage.

But in doing so, Father Paul Obayi is opposing a trend by Pentecostal preachers, who say the artefacts are symbols of idolatry and represent “evil spirits that bring bad luck.”

The artefacts are central to the traditional religions practised by the region’s Igbo people, who see them as sacred and possessing supernatural powers. They include carvings of pagan deities and masks, said Father Obayi.

“I preserve them for future purposes, so that future generations will know what their fathers regarded as gods,” he told Catholic News Service. “They are mere artefacts and should not be regarded as gods; we need to preserve and watch them in the museum, there is no need to be afraid of them.”

Some of the artefacts are in the Deities Museum, a three-room museum located in the compound of St. Theresa Catholic Cathedral, which boasts of hundreds of totems, masks, a stuffed lion, and carvings of Igbo deities. Some of the remaining artefacts are stashed in an uncompleted building outside the cathedral.

Bishop Godfrey Igwebuike Onah of Nsukka appointed Father Obayi as chief exorcist, and the artefacts and other items are from the “deliverance services” the priest has conducted in towns and villages across Nigeria’s southeast.

“People voluntarily write letters inviting my ministry to come and remove the idols that are disturbing them; they write through a traditional leader in the community or eldest in the family,” he told CNS. “They sign it and send it over to the bishop through their parish priest, asking me to come and remove it for them.”

“Sometimes it comes from the bishop of my diocese, who must have been informed by the bishop of that diocese; he’ll then ask the parish priest to support and work with me, thus paving the way for support from the priest of the parish in local community or village where the exorcism will take place,” he told CNS.

The traditional Igbo society consists of clusters of individual families living in local autonomous communities. The ancient belief system of Odinala was practised before the arrival of Christianity and colonialism and has a strong influence among the rural and village populations of the Igbo.

Odinala, the traditional cultural beliefs and practices of the Igbo people of southeast Nigeria, is a polytheistic faith that has a strong central deity at its head. It is a form of paganism where people pray to a spirit – represented by a statue – who intercedes on their behalf from a supreme being, or Chukwu.

Only a few believers of these ancient religions remain, and they endure persecution from the Christian majority.

Emmanuel Inyama, a professor of sociology of religion at Imo State University in Owerri, said when Africa was colonised, missionaries often attacked traditional religions in an effort to introduce Christianity.

Inyama said the loss of Igbo artefacts is a calamity that cuts off the old generation from the new ones.

Father Obayi said people now believe that “we Catholic priests have power and authority over deities, unlike before, when they used to run to native doctors to come and remove the artefacts that are causing them spiritual and physical discomforts in their families.”

He said when he exorcises artefacts, people’s belief in God increases.

His museum is not yet fully functional. The artefacts are caked in dust, and some have been ravaged by termites. Father Obayi say he is still looking for helpers, and “that’s why they (artefacts) are laying scattered here while some of them are at the cathedral, and not well kept.”

“We need helpers to come to our aid to make these things standard and get chemicals and experts to preserve them, because they are made of wood and termite is eating them up,” he told CNS.