Pope: Elders Rich in Wisdom and Humour Do So Much Good for the Young 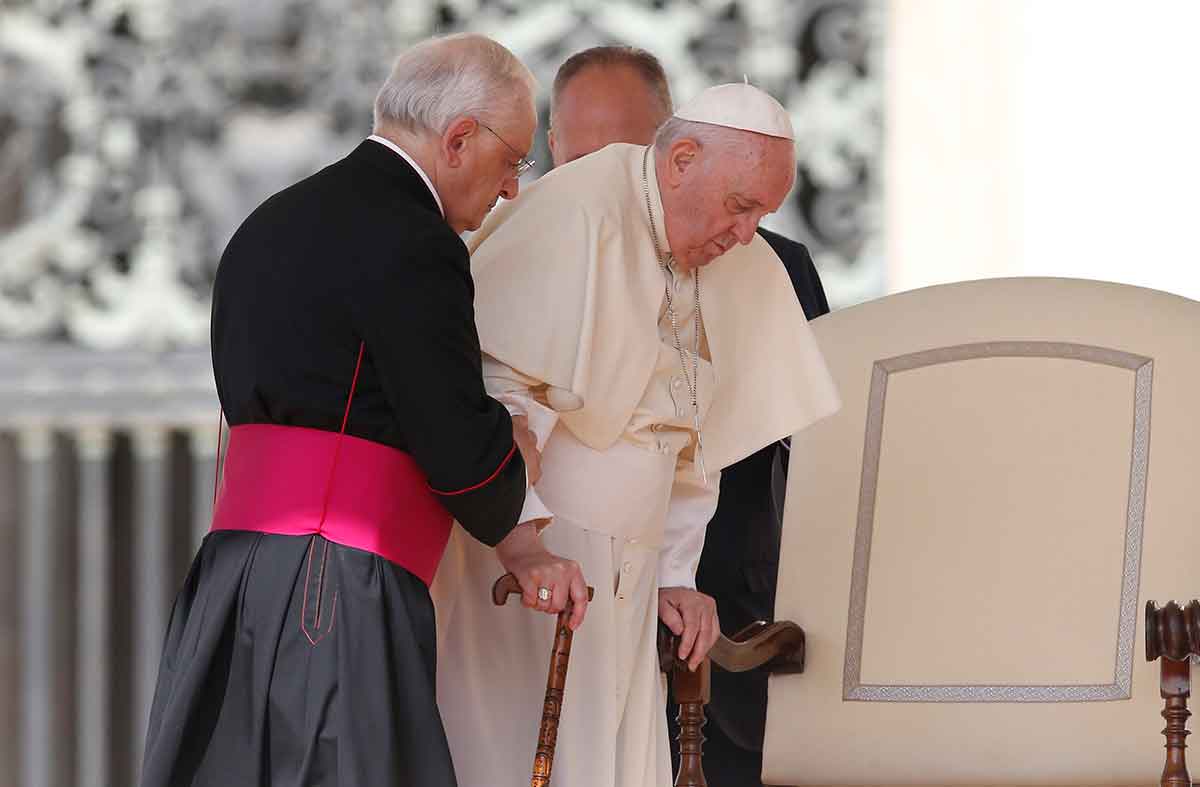 Pope Francis uses a cane as he begins his general audience in St. Peter’s Square at the Vatican May 25, 2022. Msgr. Leonardo Sapienza, an official of the prefecture of the Papal Household, assists him. (CNS photo/Paul Haring)

By Cindy Wooden – Seeing all the violence and injustice in the world, people easily grow disillusioned and wonder about the meaning of life, but Christians must fight the temptation of weariness with faith and a passion for justice, Pope Francis said.

Progress in science and technology and knowledge in general continues to advance, but “the wisdom of life is something else entirely, and it seems to be stalled,” the pope said May 25 at his weekly general audience in St. Peter’s Square.

Continuing his series of talks about old age, the pope looked at the Bible’s Book of Ecclesiastes and its refrain, “Vanity of vanities. All is vanity.”

Especially as they get older, the pope said, people naturally ask if their lives have made any difference and if anyone is capable of showing the difference between the just and the unjust.

The Christian response cannot be resignation or giving in to weariness, which early Christian monks identified as the vice of “sloth,” he said.

The author of Ecclesiastes, he said, reflects on how easy it is to grow disillusioned with life and to give up the struggle to make the world a better place, but the author also insists the best remedy is to “fear God and keep his commandments.”

Pope Francis kisses a baby as he leaves his general audience in St. Peter’s Square at the Vatican May 25, 2022. (CNS photo/Paul Haring)

“Elders rich in wisdom and humour do so much good to the young,” the pope insisted. “They save them from the temptation of a grim worldly knowledge devoid of the wisdom of life. And also, these elders bring young people back to Jesus’ promise, ‘Blessed are those who hunger and thirst for righteousness, for they will be filled.'”

The pope, 85, said he and every other older person has “a very great mission in the world,” which is to “sow hunger and thirst for righteousness in the young.”

“It is no accident that ours is the season of fake news, collective superstitions and pseudo-scientific truths,” the pope said. The only antidote is the wisdom that comes from devotion to God and to doing God’s will.