Since When Do Brides Wear White Dresses? 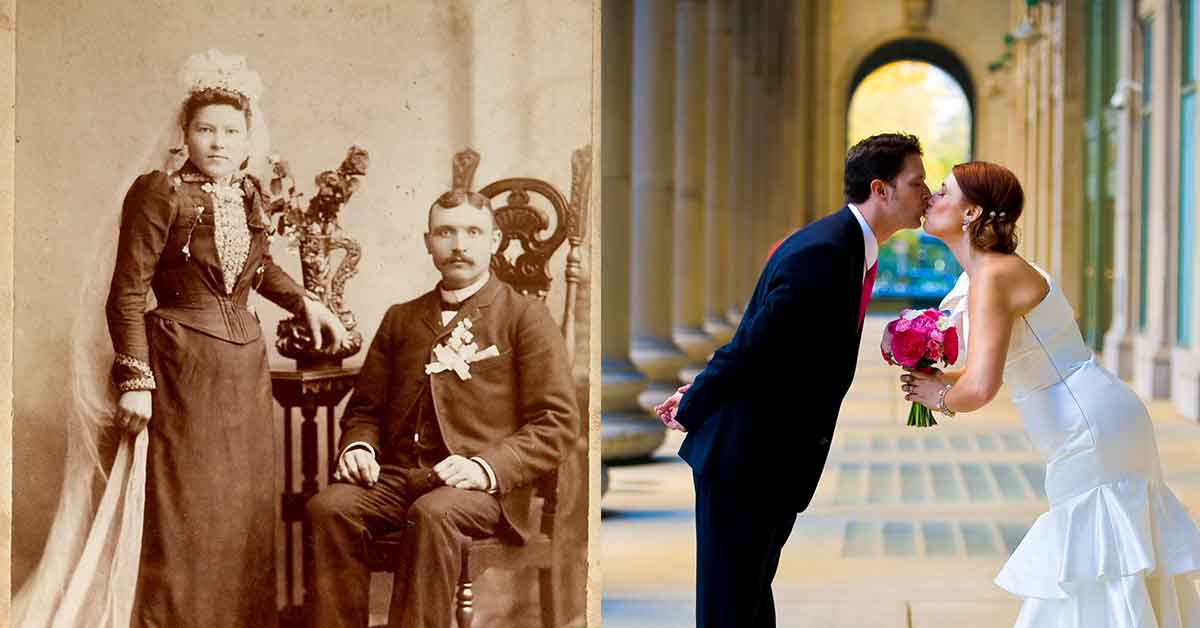 (Left) A bride in the late 1800s is wearing a dark-coloured wedding dress. (Right) White wedding dresses became the norm in the West only in the 1930s.

Question: I know that this is not a question about Catholicism, but maybe you have an answer for me. I have heard that the tradition of brides wearing white at their weddings is quite new, and that in the past brides wore black. Is that true?

Answer: Matrimony is a sacrament in the Catholic Church, so your question does have a place here. And, yes, what you’ve heard is true: in the Western world, white wedding dresses became the norm less than a hundred years ago. Before that, brides often used to wear black — favoured as a colour for special occasions — or other colours. Red was also particularly popular. In many places, such as France, brides would avoid wearing white because that shade was associated with mourning.

White and cream wedding gowns were used occasionally, but only by the very rich. The earliest record of a white wedding dress in Western culture dates to 1406, when the English Princess Philippa married Eric of Pomerania. And in 1558, Mary Queen of Scots defied all contemporary fashion when she wore white at her nuptials. Other examples followed, but they didn’t set a trend. As a Rubens painting attests, Maria de’ Medici married Henry IV of France in 1600 in a white and gold wedding dress. That started a long-running fashion among well-heeled brides to marry in light shades such as white, cream or silver.

Less well-heeled brides continued to wear their best dress, of whatever colour, or traditional costumes.

White dresses became a fashion in the 19th century, when a number of high-profile royal weddings featured brides in white, and images of white-dressed high-society brides spread thanks to the nascent photography technology and increasing popularity of illustrated magazines. Three particular royal weddings influenced that trend: On February 10, 1840, Queen Victoria wore a white dress at her wedding to Prince Albert (apparently to promote the British lacemaking industry), as did Duchess Eugénie at her wedding to France’s Napoléon III in 1853, and a year later the hugely popular Princess Sissi when she married Austrian Emperor Franz Joseph I.

Over the subsequent decades, white wedding dresses became popular among those who could afford it. For one thing, they reflected the idealised married bliss of Victoria and Sissi in particular. For another, because white garments were costly and difficult to clean, they were status symbols. So the majority of brides continued to wear black or other colours.

As white garments became more affordable in the early 20th century, more brides adopted that shade. By the 1930s, white dresses had become the norm. The white wedding dress as a symbol of purity is therefore a rather new tradition, and one that has little currency in most non-Western societies.

The fashion of brides spending obscene amounts of money on white (or off-white) wedding dresses that could be worn only once was fuelled by Princess Diana’s wedding to Prince Charles in 1981, at which she wore an ornate white taffeta dress with a 7,5m-long train.