Part 12: Flying fists at the place of Christ’s resurrection

It seems insufferably foolish that some of the most spiteful manifestations of co-existence between Christians should have permanent residence in the place of Our Lord’s crucifixion and resurrection.

On a window ledge facing the courtyard of the church of the Holy Sepulchre in Jerusalem’s Old City  on Calvary  stands a ladder which has not been moved since about 1854. Nobody knows how it got there, or exactly when. One day it was there, and has remained in the same place ever since. To move the ladder would require the consensus of the three principal churches that run the huge church: the Greek Orthodox, Catholic and Armenian churches (the Syrian, Ethiopian and Coptic churches also have a presence in the church). But to reach a consensus might involve compromise, and that article is in very short supply in the holiest place in Christendom.

The bickering is an ancient tradition. None of the denominations has a key to the front door. Since the 12th century, the key has been in the custody of a Muslim family, the Judeh, who in turn hand it every morning to a representative of the Nuseibeh family, which has been responsible for opening the door every morning and locking it every night for more than 800 years.

The first church of the Holy Sepulchre was built in the 4th century by Queen Helena, mother of Emperor Constantine. When we say she built the church we don’t mean that she put pencil to blueprint or mortar to brick, but that Helena appointed its site and financed its construction.

Helena is famous for landing in the Holy Land and discovering a succession of holy sites as though possessed of the luckiest streak in history. More likely, she was guided to these holy places by fellow Christians whose constant presence had ensured the survival of the collective memory, aided by markers such as churches and other early shrines.

One such place of veneration was on the hill where Christ was executed and buried, and from where he rose again. It is quite obvious that the Christians of Jerusalem would not suffer a bout of collective amnesia about the location of the most incredible event ever, even three centuries after the fact. And even if they somehow did, the Romans helpfully signposted the place for Helena when Emperor Hadrian in around 130 built over it a pagan temple dedicated to Aphrodite, possibly to discourage Christian veneration there (another sound argument claims that the location was incidental).

Helena had the temple dismantled, and went on to find the reputed tomb of Jesus. She or people working on her behalf, also unearthed a few crosses (there is a pious tale to explain how that of Christ was identified) as well as the INRI inscription, which is now kept in the Santa Croce church in Rome’s Gerusalemme district, which was built as a repository for the queen’s sacred souvenirs.

Helena’s church was sacked, like almost every Christian church in the region, in the Persian invasion of 614. The church was repaired in the 10th century by the Muslim rulers, but was razed in 1009 during a particularly nasty persecution of Christianity. Indeed, the final destruction of the first church of the Holy Sepulchre would contribute to the call, sounded a few decades later, for the Crusade to recapture the Holy Land. In the interim, the rebuilding of the church had begun, but the Crusaders finally completed it in the state we know it now, give or take the occasional renovation, in 1149.

It didn’t stay in Christian hands for long. In 1187 Saladin expelled the Crusaders, and for the next couple of centuries control of the church oscillated wildly for centuries between Catholics and Orthodox (or neither). The Franciscans had control of it for three centuries until 1662; thereafter supremacy of the church was subject to the whims and favour of the local Muslim rulers. By 1767 they had grown tired of the constant squabbling.

Like a strict parent who has no interest in the justice of the cases brought forward by bickering children, the sultan gave the churches control over their own defined areas. The Orthodox were awarded the prime area of the rotunda (they had occupied it since a raid on Palm Sunday 1757), which includes the tomb as well as the spot where Jesus’ cross is believed to have stood.

To these, however, they must allow access to members of other denominations. So Catholics and other Christians may crouch beneath the gaudily decorated altar and reach through a hole to touch the rock on which the cross stood, and they may enter the tomb chamber as an Orthodox monk hurriedly ushers them in and out.

Next to the altar of the cross is the Catholics open chapel of Our Lady of Sorrows. It is the 13th Station of the Cross, recalling the dead Jesus being taken from the cross. Catholics may have Mass there, as our group did on the morning of our departure, but the liturgy may not include the singing of hymns, lest songs of praise distress our Christian neighbours.

The division of the church was confirmed in 1852 by a decree of the Ottoman Sultan Abd-ul-Mejid I (in response to international pressure), who pronounced with decisive finality: The actual status quo will be maintained and the Jerusalem shrines, whether owned in common or exclusively by the Greek, Latin, and Armenian communities, will all remain forever in their present state. That should have settled things, bringing about peaceful co-existence rooted in fraternal Christian love. But it hasn’t. The tension finds regular expression in petty acts and frantic finger-wagging. And once in a while, the pot boils over and (to mix metaphors) the gloves come off.

In April and again in November 2008, brawls broke out between Armenian clergy and worshippers and their Orthodox counterparts. When the police arrived in the Holy Week incident, they were thrashed with palm fronds. Both melees were caused when an Orthodox priest made himself present during an Armenian service at the edicule (the structure that houses the tomb of Jesus). The Orthodox said their clergy must be present at these services, else the Armenians, presumably dissenting of the status quo, might claim ownership of the edicule.

In September 2004, there was a fracas between the Orthodox and Catholics because the latter had failed to close the door to their chapel, which the Orthodox perceived as the height of disrespect. There was lots of hitting going on. Police were hit, monks were hit…there were people with bloodied faces, The Guardian quoted an eyewitness as saying. 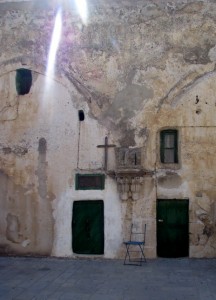 A chair on the roof of the church of the Holy Sepulchre. Moving it could cause a territorial skirmish.

And it’s not only the Orthodox who get into scrapes. In 2002 Copts and Ethiopians bombarded each other with rocks over a territorial dispute on the level roof of the basilica, injuring 11. The skirmish started because a Coptic monk, sizzling under the hot sun, moved his chair into the shade and that fell on Ethiopian territory. How can such transgression possibly be left unpunished?

So we need not wonder why there can be no agreement to move a ladder. Indeed, the ladder is a visible sign of our Christian division. I hope it won’t be moved until we are one.