If you walk from the City across the Ponte Sant’ Angelo, past the Angel’s Castle, you will come upon the road of Conciliation, that leads you to the largest house of God in the world. It’s the funeral basilica of Peter, the fisherman. One afternoon I was near there. 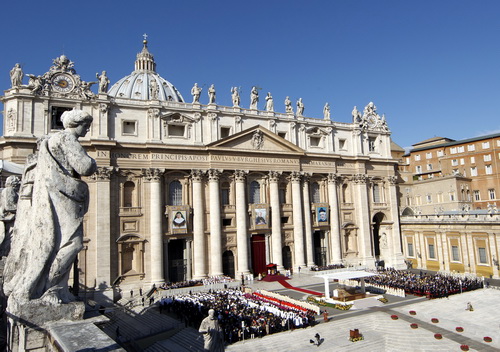 Once I met a man who held a stone in his hand. He found it lying on the square of the peoples of the world. He looked me in the eye, and said: “What shall I do with this stone? I want to use it…” I asked: “What do you want to do with it?” He thought for a moment, and said: “I want to break something, because I’m angry. I’m angry about the world, and my family, and my whole life. And about God and the Church, and I want to hurl this stone, to do the most damage I can, so we can start all over again. Let’s make all things new: new heavens and a new earth! No more old buildings! No more sinful priests! No more sin at all!”

I thought for a while, as I looked at the stone in his hand. “Where did you get this stone from?” “From this square here”, he said. The shadow of an obelisk had begun to cover us. We looked up at it together for a moment. It was covered in hieroglyphs. It was also made of stone. “Break that down, I said: that’s just a piece of pagan nonsense, brought here by the emperors of a dead empire, to glorify themselves. It serves no purpose any more.”

The man looked horrified. “Not that!” he cried. “That’s an Egyptian obelisk. It’s sacred!” “Well, I said, the gods it talks about don’t exist. David the psalmist wrote what we open our lips with every morning: “The Lord is a great God, above all gods”. There is just one God, who is the Lord. See on top of that obelisk: there is a small cross. It was put up there by a Christian emperor.

The man fell silent. “Do you know what your stone is called?” I asked. “No”, he said, “it’s just one of these endless stones here, for making streets and squares”. I felt the stone, still warm to the touch from the afternoon sun, full of the potential of every stone, to smash and to build. “Your stone is called a sanpietrino [a little Saint Peter]”, I said, “because it looks like all those stones used to build this biggest house of God in the world right here. A Galilean fisherman was murdered on this spot, 19 centuries ago. And on the place where his blood ran into the ground, men and women from part of the Christian world came to praise God for his witness unto death. An emperor built this church, a smaller one because God’s Son’s Holy Cross had appeared to him burning in the sky. And his mother, full of devotion to the new religion now hers, went to Jerusalem, to bring to this place the remains of that Holy Cross upon which the Saviour hung”.

“That stone you are holding  it would do nicely as a cornerstone, y’know. It’s the one the builder’s rejected, but it will hold God’s holy Church up, it will keep the forces of darkness outside the Pilgrim Church of God, the wolves from the sheep. The light of Christ our Shepherd shines from this little boat, and the forces of hell will not stand against her. At least, that’s what it says inside this great church, taken from the tax collector’s book”.

“Do you think so?” he said. It was now night. We looked together up at the single light shining from the Apostolic apartment: top row, second from the right. “The fisherman is there”, I said. “He speaks with love and in truth to all the world, to all men and women of goodwill, to the city and to the world. He needs you, and your stone, to support the holy Church. She is holy because she is the Bride of Jesus Christ. And today He is risen from the dead”.

The man said nothing, but light reflected off the tears on his face. He walked to the edge of the massive walls of the Bark of Peter, the nave of the ship in which all Christians travel together to the new shore. He saw a little hole in the wall, and he pushed his sanpietrino into it.

Together we offered a prayer for the fisherman-shepherd, Benedictus, and all the sheep of the fold. We entrusted them quietly to our Mother, the faithful one who never the left the foot of the Cross, who on Good Friday held the lifeless body of Jesus her Son in her arms. She is the Bride of the Holy Spirit, who will come upon us at Pentecost, as He was poured out in the Upper Room. From that room where eleven men and a few women had locked themselves in after the Crucifixion flowed a greater force than any other ever seen in the history of the world. That force came out of the empty tomb, from the risen Christ, Son of the Living God. No more than God itself is that force dead today*.

All of Rome slept as we made our way across the Tiber in the moonlight, the water coursing quietly under us, rounding the jagged edges of the stones that lay in her arms.

*Credit to Warren Carroll, The Founding of Christendom, Christendom Press, 1985.

What the Pope Said on Pentecost

Faith Can’t Be Taught, it Must Be Caught
Share