What attracts Pope Francis to the saint of Assisi?

The pope’s decision to name himself after St Fancis of Assisi is the talk of the taverns. Fr PATRICK NOONAN, a Franciscan, tries to explain.

Who is this 13th century holy man that everyone wants to explain? Who was this frail-looking, unorthodox little man who outfoxed and outpaced the pope’s medieval military machine, the fifth Crusade? What does Pope Francis from South America see in St Francis from Europe that he took his name?

Today, for many, Francis is associated with animals. Soon after his death people started talking of how much he had liked animals when he was alive; of how he spoke to them easily. The birds listened to him too and even obeyed him, and a man-eating wolf accommodated him nicely in a forest near a place called Gubbio. 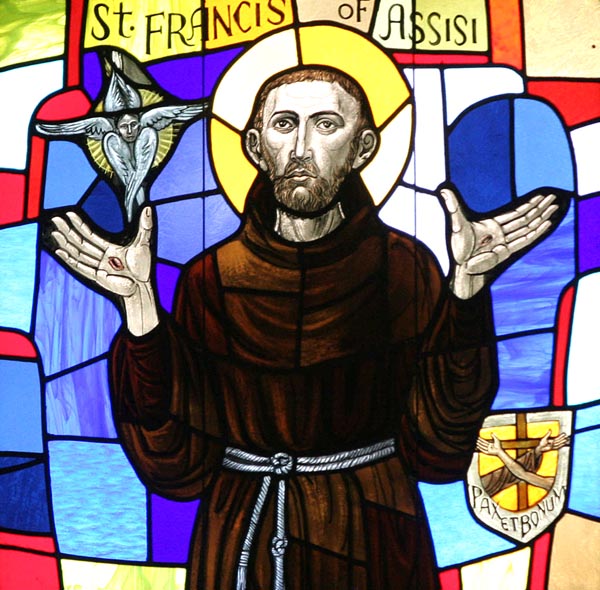 St Francis of Assisi is depicted in a stained-glass window at St Hyacinth Church in Glen Head, New York. (CNS photo/Gregory A. Shemitz)

White doves still sleep on the head of his statue metres away from where he died, in a chapel that is now within the walls of the basilica of St Mary of the Angels, just outside old Assisi. And some people have their animals blessed on his October feast day. Some know St Francis only because he loved animals, but that diminishes the man; it trivialises his message.

Francis of Assisi was a medieval swank who appalled his contemporaries when he voluntarily became a medieval tramp. Curiously, so many centuries later, the world is still debating why he did this.

Captured by soldiers from his neighbouring town, Francis was made a prisoner of war. The humiliation was devastating. The endless months as a prisoner in a medieval dungeon took their toll.

It was when he came out of jail that his close friends, the ex-combatants of Assisi, noticed first. They said he was a little spaced out; a little removed from them in space and time.

Francis began to act strangely, to do things differently which caused more talk. His closest friends were baffled. Some drifted away. There was no point, they said. The bawdy humour had diminished. The girls were fading from his hitherto clear line of vision. He no longer pinched wenches, banged tankards and called for more ale. Peer influence was less and less a factor in his life.

At home Francis had lost interest in carrying on his father’s business. He was no longer motivated by profit, hard work, success and achievement, the ingredients that drove the family business.

One day he was caught giving away bales of imported linen from the family shop. His father went berserk, justifiably.

The lure of something beyond the family was becoming more insistent, definite and demanding. This reached a crisis level one afternoon when he publicly, before bishop and citizens, stripped and returned the clothes from his back to his uncomprehending father.

His poor father was completely crushed at this crazy behaviour. He had hoped that the bishop would knock some sense into his son’s stupid head.

Not long after that it was rumoured that Francis Bernadone had a peculiar experience before a cross in an abandoned church called San Damiano. Kneeling to pray before the main altar, that morning he heard a voice, coming from the crucifix, say three times, Francis, go and repair my house which, as you see, is falling completely into ruin. He had received from God a mission. A vocation!

This further confirmed his recent reflections. It helped him to see a way forward. It was one of many life-wrenching experiences he had had lately, a sort of vague divine approval.
And, of course, there was Francis’s life-changing meeting with the leper while he was out riding. That blew his mind, his whole being. He had embraced a leper, the supposed scum of the earth.

It happened all alone in an open field pathway just below the town of his birth. Outcast and abandoned lepers were never allowed near a residential area. For Francis, it was life-splitting, an emotional lightning bolt, a spiritual tsunami verily, the hand of God.

Francis was heading in a new direction. People wondered where his ideas came from. Soon he was knocking at the door of the nobodies of society, asking to be admitted to their world: the world of the poor.

Yes, he was discovering in the poor the different faces of Christ and beginning to see events in his own life from their perspective. That was quite unusual for the time (or for any time, really). It was liberation theology before its time. Some theologians today would call it solidarity with the poor.

Pope Benedict XVI agreed when he said in Brazil a few years back that the preferential option for the poor is implicit in Christological faith. 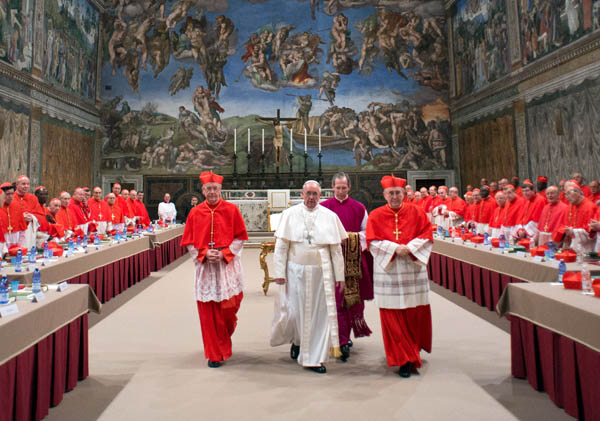 Pope Francis leaves the Sistine Chapel after being elected pope and shortly before appearing for the first time on the central balcony of St. Peter’s Basilica at the Vatican. (CNS photo/L’Osservatore Romano)

Francis is hardly remembered by writers and preachers in the northern hemisphere for his extensive travelling throughout medieval Italy in the cause of peace-making and reconciliation. An austere Ghandi-like figure, he was able to intervene quite imaginatively to bring peace where he found bloody discord, violence and tribal faction fighting.

His later local political interventions were notable too. One day, outrageously to many, he publicly provoked politicians by declaring at his treasonous best that he was a servant only of God, and no longer owed allegiance to civil authorities. We will remember that the churches in South Africa came close to this point of witnessing in the final years of apartheid.

Who will forget his astonishing peace pilgrimage to the African city of Damietta, in Egypt, where he created an international incident by interfering with the war plans of the opposing Christian and Muslim armies?

Pope Benedict XVI, speaking of St Francis in February 2010, offered an interesting answer: The ruinous state of that Church was a symbol of the dramatic, disturbing situation of the entire Church of that age, with its superficial faith that did not form and transform peoples lives, and with a clergy that was not zealous.

The Church, Pope Benedict observed, was decomposing from within.

Now think of the recent explosion of child abuse and corruption scandals which rock that same Church today. Did Francis abandon this decomposing Church, like so many today, when its human side showed signs of failure? Not Francis. He was made of something else. He had already submitted himself to Jesus as his Lord and Saviour. Nothing could budge that conviction, not even a corrupt and sinful clergy.

Furthermore, didn’t he admonish his friars to respect even the rotten priests by virtue of their priesthood and their ministry of the Eucharist? Counter-cultural indeed.

We live in the hope that God will continue to intervene, purge and purify his Church every time it needs it, whether by raising up people like St Francis or by sending the media legions to expose the accumulating evil within the ranks. But let us move on.

Because of his poetic and spiritual engagement with all creation, Francis was named patron saint of the environment in 1980. And look how crucially important that is today. Francis already knew that our world, our small blue planet in the midst of the vast Milky Way, is in truth a sacred sanctuary, a dwelling place for the divine.

Always hovering in the background was the beautiful, determined and unorthodox Clare, bent on becoming part of Francis’s growing movement.

No wilting lily she; one time she repelled attacking Muslims by raising a monstrance with the Blessed Sacrament over them. She insisted until her dying day that the pope approve her radically new rule for religious women. He gave in, defeated. It was an early victory for religious feminism.

It was at St Clares convent that Francis wrote The Canticle of the Creatures, a beautiful poem opening up in praise to all created things.

All serious students of Francis of Assisi agree that somehow he had succeeded in penetrating the mind of Christ better than most. This Francis-on-Christ phenomenon, distilled through his larger-than-life personality and his experience of conflict and violence has fascinated the world for 800 years.

And this is the world that speaks to Pope Francis.