Every reasonable South African will feel revulsion at the assault on Fr Victor Phalana and his parishioner, Martin Wamba, by a group of white racists, apparently prompted by the funeral of Nelson Mandela. 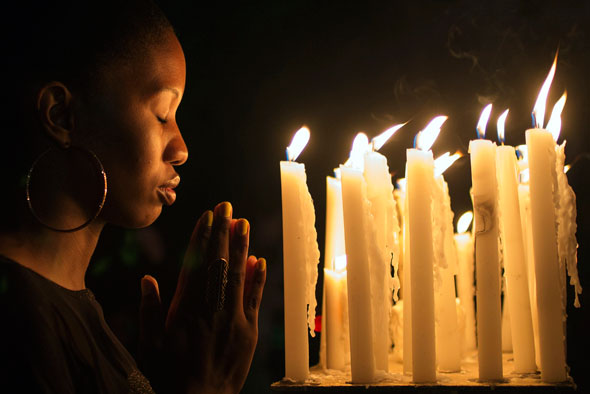 “Those who propose that bygones ought to be bygones, that the past be forgotten—even as the dismal effects of that past are present everywhere—seek a premature absolution. ” (CNS photo/Adrees Latif, Reuters)

Fr Phalana may well be right in suspecting that he is not the only black South African to have been targeted by racist thugs following Mr Mandela’s death. If a black priest, wearing his clerical collar, is subjected to a racist assault, then how many more unreported cases might there be?

Almost two decades into our democracy, the kind of racism that visits violence upon others is not extinct in South Africa, even if it is not as widespread as the casual racism that still enjoys currency in some social circles.

Moreover, if Fr Phalana is correct in estimating the ages of his assailants to be between 20 and 30, then this racism has been inherited by people who were children, or perhaps not even born, when apartheid collapsed.

We should not be surprised by this. In South Africa today, where almost every person living in abject poverty is black, many white people claim to be victims.

This sense of powerless victimhood may find its manifestation in frantic references to an imagined genocide. More commonly, it bemoans black economic empowerment and affirmative action in unhelpful terms such as “reverse racism” (these policies, of course, may be validly criticised for their often corrupt implementation which has failed the poor). It refers to a supposedly superior past and to unspoken notions of entitlement.

Of course, many white South Africans have fully embraced our country’s pluralism. Many proudly fly the post-1994 flag; others, however, still display the flag of the old South Africa.

Nonetheless, it is valid to observe that white South Africans collectively have shown little appreciation for the culture of peaceful racial coexistence which Nelson Mandela, Thabo Mbeki and, yes, Jacob Zuma helped to entrench. There has not been authentic contrition for the evil of apartheid.

On the contrary, the hand of friendship offered by black South Africans has not always been taken. Many whites still show their black compatriots disrespect, often without even being aware of it, with a changing tone of voice or a facial expression, or by tolerating white demagogues while vilifying a black demagogue such as Julius Malema.

Those who propose that bygones ought to be bygones, that the past be forgotten — even as the dismal effects of that past are present everywhere — seek a premature absolution.

White South Africans generally remain reluctant to fully acknowledge that the policies which were implemented in their name—with the sustained and explicit consent of a significant majority — caused immeasurable misery which continues to afflict most of the nation even today.

It is this casual approach of dealing with the past which represents an obstacle to true reconciliation, more so than mindless assaults by racist thugs.

The need for absolution, the point when bygones can indeed be bygones, does not require endless apologies but the development of a collective consciousness which unconditionally accepts the past with a sense of awareness and unqualified penitence.

Post-war Germany offers a lesson in its process of overcoming the burdens of its Nazi past, what Germans call Vergangenheitsbewältigung.

The process was initially painful and littered with obstacles. It required brutally honest introspection, as a nation and by individuals. It involved not only those who were in some way complicit in the Third Reich, but even those born many years afterwards, and it is ongoing.

The process bore fruit. Germans now, generally, have a communal, instinctive understanding that their history is tainted by the Holocaust and a cataclysmic war, that Germany bears a historical burden and that therefore Germans, collectively and individually, have to act with a certain consciousness and caution.

White South Africans have barely begun the necessary process of Vergangenheitsbewältigung. They are far from the point at which they can say that they are coming to terms with the past and the evils committed in their name.

Until they do so unequivocally, there can be no genuine reconciliation.