The state of the Zuma nation: SA’s sad story of dashed hopes

Twenty years ago, in the full flush of euphoric hope and optimism, flowing from the miracle elections and transition to democracy, almost everyone in South Africa was fully convinced that together, black and white, we could realise the impossible dream: a life in peace and harmony in our common homeland. 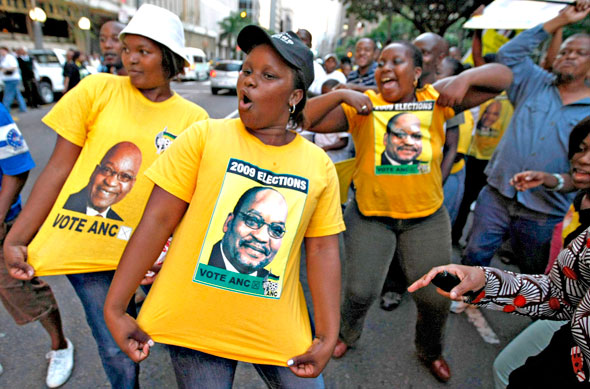 Supporters of Jacob Zuma celebrate the ANC?s 2009 election victory in Durban. In his article, Cardinal Napier writes that the optimism that followed the 1994 election has given way to race-based policies, and corruption. (Photo: Mike Hutchings, Reuters/CNS)

We believed we had it in us to work and struggle together selflessly to achieve the objective of becoming a winning nation.

How times have changed!

At that time, we were led by a statesman who knew how to sacrifice his own dreams and ambitions in order to lay the foundations for a united nation out of the rich variety of peoples who made up South Africa.

At that time, we looked forward every week to being inspired by our president as he reported on the progress the Reconstruction and Development Plan was making in redressing the inequalities and disparities of the past, little step by little step.

At that time, the Truth and Reconciliation Commission (TRC) was day by day exposing the atrocities committed in the name of apartheid. Victims or their families were brought face to face with the perpetrators to learn from them the truth about what apartheid and its agents had done to hold on to power.

A major fruit of the TRC was the way it exposed those horrific acts of inhumanity to the light of forgiveness and reconciliation which was miraculously still present in the human heart.

At that time, the country prayed fervently that God, who had made the miracle happen, would bless us with the spirit of Jesus, not only to forgive but also to bring good on those who both plotted and executed unspeakable pain and suffering on fellow human beings.

At that time, we waited in anticipation and amazement at what our president would do for reconciliation and nation-building, by his actions more than by his words.

At that time we clung on to the impossible dream that black and white together could make democracy work for the benefit of each and every citizen, immigrant, refugee and vulnerable person, man, woman or child.

Then one day we woke up to find that the dream was no longer as clear and compelling as we had envisioned. Instead it was fading, dispersing, disappearing. Suddenly we were no longer one people, black and white together, sharing one homeland, working to reach one common goal. Somehow we had become a nation of two peoples, one black and poor, the other white and rich.

With this daily diet of racial categorisation of people in governmental policy statements, racial profiling was back in force, determining who had what rights and under what conditions.

Worst of all, even the born frees  those born in 1994 and after  were being draped with the albatross of race around their educational, political, social and economic necks. Race was back in fashion. It was the criterion for apportioning rights and benefits, even those guaranteed by our much lauded Constitution to each and every citizen and inhabitant without distinction and certainly without discrimination.

Once this notorious apartheid barrier had been breached, it was only a matter of time before the untouchable elite, ensconcing itself in the chambers of power, would set about diligently laying the foundations of its empire of corruption. It would not be long before we would see the tentacles of secrecy make their way into political thinking, policy and practice under the guise of state security.

Of course this had to be accompanied by the gradual and systematic assumption of control over those state structures designed to inspire, nurture, grow and protect the rights guaranteed by the Constitution. Creating such a culture necessitated the removal of all actual and potential obstacles.

One of the most important to go was the Scorpions. This extremely effective crime-busting unit was ruthlessly pursued, discredited and eventually disbanded in what can only be described as suspicious circumstances.

It was replaced by a more compliant structure that fell firmly within the South African Police Service, which was once described by one of its own as corrupt from the top to the bottom, from the bottom to the top. Even the new units title, The Hawks, tells you that this new creature is much more benign, much less threatening to those involved in unlawful activities.

Next the elite applied itself assiduously to state security. The attacks on the Twin Towers in New York and the Pentagon in Washington on September 11, 2001 saw the United States and the West feverishly export a new terror/terrorist psychosis to the rest of the world. It wasnt long before the South African government resurrected some of the most hated security laws of the apartheid regime as its contribution to making the world safe from terror attacks.

Indeed, responding to the new terrorist threat was made the reason for tightening up that legislation.

An example is the Protection of State Information Bill. Without providing tangible evidence of resurgence in terrorist activity, state security is being used as a pretext for covering up a variety of scandals ranging from the Arms Deal and the so-called Gate scandals that implicate President Jacob Zuma: Guptagate and Nkandlagate.

These are simply the cherry on the top of a veritable fruitcake of maladministration that is having a disastrous effect on every area of life  education, healthcare, social development, commerce, governance.

Are we reaching the point where we have to dust off and re-examine the strategies and tactics such as civil disobedience and prayer for the downfall of an unjust and corrupt government which has become a self-serving regime?

But it would be irresponsible to advocate such a drastic course of action without ensuring that both its reason and goal are well founded in the Scriptures, the Tradition and the Social Teaching of the Church.

As I reflect on this radical option, I am reminded of the fearless declaration of one of the outstanding Church leaders of that time: I am calling for prayers for the downfall of this heartless apartheid government.

It is sad but true that many of the things that he decried in the conduct of the apartheid regime are starkly evident in our day. Hence the question: Has the time come for a similar call?

At that time, our first recourse was to engage government on the serious issues of the day in an attempt to persuade them to take urgent and drastic action to correct them.

Then, we served notice of the action that would follow failure to act appropriately.

Thirdly, we launched the Standing for the Truth Campaign, deliberately and systematically, with a strident call for civil disobedience to all unjust laws, the endorsement of the call for economic pressures/sanctions and a general appeal to all Church members to join our Prayer Campaigns.

The great advantage of these three measures, but especially the Prayer Campaign, was that they were non-violent, non-denominational, non-racist, non-discriminatory. No individual, no group, no race or culture was singled out.

In concluding I have to admit that I am shocked that in 20 short years we should have reached such a pitch of hopelessness and frustration with the powers that be that we should be thinking like this, let alone contemplating the actions outlined above.

May the all-merciful God help us to find the right answer together, black and white together.

Cardinal Wilfrid Napier is the archbishop of Durban. He is writing in his personal capacity.