The law in Belgium and Holland that enables a person to choose voluntary euthanasia in the case of terminal diseases has now been extended to include children as young as three. Sister of Nazareth Margaret Craig shares her deep concern and her experiences of dealing with the death of children. 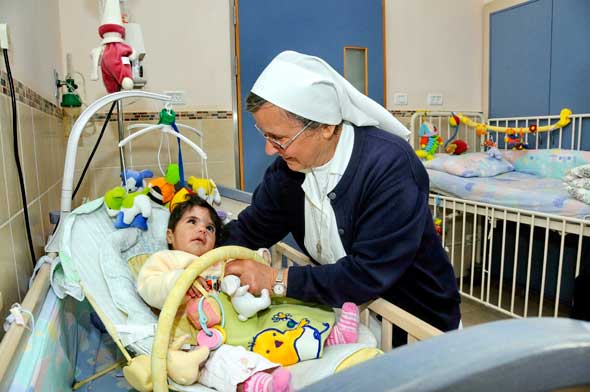 A Daughter of Charity is pictured caring for a child with severe disabilities in Haifa, Israel. Sr Margaret Craig of Nazareth House has witnessed many children’s deaths over the years and states that euthanasia can never be justified. (Photo: Debbie Hill/CNS)

Earlier this year I was stunned to hear the morning news on the radio: Belgium would become the second country after The Netherlands to pass a law legalising euthanasia for children. Suddenly the faces of all the babies and children who had died in my care crowded into my mind.

Their pain and suffering, yes, but also their determination and longing for life, encouraged by the love and care we were committed to give them.

I recalled my numerous encounters with doctors and their varied prognoses for many of the children: “This child will never walk or talk”; “He is blind and deaf”; “Just give terminal care, she won’t last more than a month”; “No point in speech therapy, he won’t last long anyway”; “With a heart condition like this, she will die before she is 10”; “The tumour is inoperable, no point in sending her back to school;” “He only sits and smiles, it would be kinder to let him die”.

After several years all but one of these children are still alive, enjoying a good quality of life and have defied all the predictions of the medical experts.

Had these children been living today in The Netherlands or Belgium instead of South Africa, would they still be alive? Would they be allowed to live?

Some have confounded us all. I remember asking a particular doctor to let us take a little boy of 4 years home from hospital so that he could die in peace and comfort with us.

He had been slipping in and out of consciousness for two weeks, was continually losing blood and was wasting away with a weight below 9kg. After much discussion, we eventually agreed for the doctors to try one more treatment as a very last resort. If this did not help, then we were free to take him home.

Today this same child is a happy healthy teenager, reunited with his family and has every opportunity of a full life ahead of him.

A little later in the day I attended a school children’s Mass. As I sat at the back of the church, still somewhat heavy-hearted, preoccupied with the news of the morning, I reflected on these children in front of me all looking so energetic and healthy.

What if one of them was to suffer a serious injury, become blind, lose a limb or suffer a stroke? Would they or their parents choose to—or be encouraged to—actively assist in their death? Indeed, they could well be in a position to legally make that decision in a few years from now.

No matter how difficult some of the deaths of those children whom I have had the privilege of caring for have been, never once have I felt that I had the right or the duty or the desire to end that life before the time that only God had measured for them. Who are we to judge, to decide?

Being involved in child care and social work over many years, I have assisted many mothers, fathers and grandparents, while they have battled to accept and understand that their child has been born with serious mental or physical disabilities, genetic disorders, or have later developed a terminal illness or are going through the final stages of Aids.

Wherever there is life there is hope, and when that life is finally ready to move on into eternity, then we need to let God take over so that He can receive His child home, graciously and with peace, dignity and love.

I have been present at the deaths of over 80 children and babies. I have sat with them, comforted them and held them on their final journey. Thankfully, great advances have been made in the area of pain control and relief, making it more effective than ever before.

Each child, ranging in ages from 17 days to 16 years, has been profoundly different and special. For me it has always been such a privilege and a grace-filled moment to be close to the child and to the Lord as they meet each other.

It is vital to help the child feel safe, secure and comfortable with themselves, and as far as possible to ensure that the person closest to them is there to be with them.

The child’s particular needs must come first; we cannot choose that time to feel guilty or to decide we cannot cope. We must do our very best for the child, and grieve later.

Child euthanasia is linked to the adult’s feelings. The idea of euthanasia tries to encourage the adult to feel better, to feel that they can control the situation for the child and that they have the “right” to bring to an end the life that they themselves have created. But who are we to have that “right” and to exercise that power? The fact that we have the knowledge and capacity to end life artificially, to kill; does not make it right.

What of future interpretations of this law? We already have legal abortions for gender selection and genetic defects of unborn babies. Will the time come when parents have no say if they do not want their child to be euthanased? Will future law courts overrule the wishes of parents or even children who do not want their life to be ended in this way?

If a child loses limbs, becomes blind, paralysed, or in some way incapacitated through accident or illness, will this automatically “qualify” him or her for euthanasia? Not yet of course, but what about the future? History shows that this is not an exaggerated concern.

Severely disabled cerebral palsied children? Will they count at all? So many are trapped in a dysfunctional body while their minds are alert and eager—their responses of smiles, laughter and understanding are so obvious. I personally have known and experienced the joy and pleasure on the faces of such children, from the effects of a walk in the garden, a magic show, a funny DVD, occupational therapy, puzzles, singing, music and touch. Do we have the right to make a decision on the life or death of that child because he or she is not like you and me? Is not perfect or normal according to our standards?

Those of us who have dealt with such children have been blessed by their positive response (however slight) to a tender touch, a gentle word, and their own determination to cling to life.

In turn, they themselves are the channels through which we learn to become more compassionate, caring and gentle. As Pope Francis told us: “Those who help the needy touch the flesh of Christ.”

Prayer for the World Day of the Poor