Our Journey with Three Great Saints

In October a group of Southern Cross pilgrims, led by Bishop Joao Rodrigues of Tzaneen, returned from a pilgrimage to Portugal, Spain and France. In the second of four articles, GUNTHER SIMMERMACHER looks at places associated with St Teresa of Avila and St Anthony of Padua. 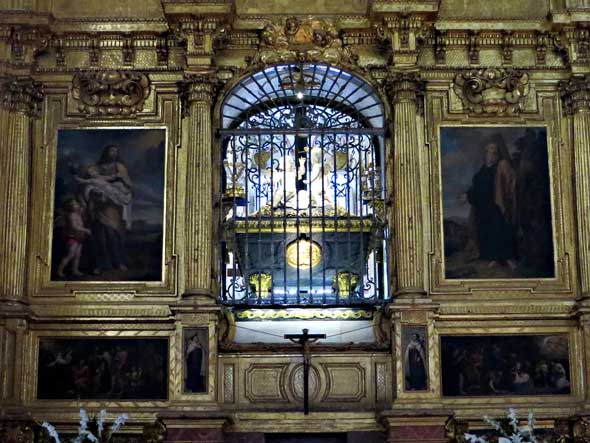 The tomb of St Teresa of Avila above the altar of Annunciation church in Albe de Tormes, Spain. Right: The Cuatre Postes observation point with the lit-up 12th-century city walls of Avila, the Spanish town of St Teresa and St John of the Cross. (Photos: Gunther Simmermacher)

Even the Blessed Virgin needs the company of saints. So it was on our pilgrimage to Portugal, Spain and France, which was distinctly Marian in focus, with Fatima and Lourdes as the centrepieces. Three saints in particular accompanied our group. St Teresa of Avila, St Anthony of Padua and St John Paul II.

St Teresa of Jesus is known as the reformer of the Carmelite order, which places the rosary at the centre of its prayer life. St Teresa herself reported apparitions of Our Lady, as well as the famous vision of the scourged Christ. The pillar on which she saw the latter vision can still be seen in the convent of the Incarnation, outside Avila’s Old City.

Our group was privileged to have Mass in the convent church, which is usually closed to the public. The nuns told us that they made the church off-limits to the public because tourists kept stealing precious items from it.

The convent is where St Teresa lived and where she later served as superior. Many items belonging to her can be seen there. Also on view is her cell, with the desk at which she wrote so prodigiously. 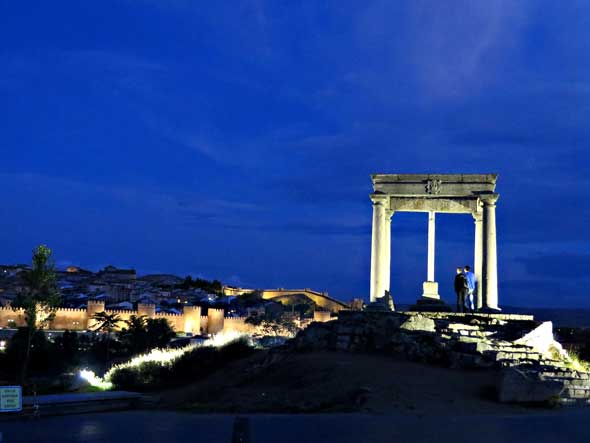 The tomb of St Teresa of Avila above the altar of Annunciation church in Albe de Tormes, Spain. Right: The Cuatre Postes observation point with the lit-up 12th-century city walls of Avila, the Spanish town of St Teresa and St John of the Cross. (Photos: Gunther Simmermacher)

St Teresa’s confessor and collaborator, St John of the Cross, is also present at Incarnation convent: one can see the place where he heard confession as well as his chair.

The old city of Avila is magnificent. Encircled by impressively preserved walls built in the 11th and 12th century, it is medieval and resolutely non-commercial. The visitor has a stunning panoramic view of the city and the walls, especially at dusk, from the Cuatre Postes observation point, just a couple of minutes walk from our hotel.

Inside the city the highlight is a small chapel that marks the place of St Teresa’s birth on March 28, 1515. The richly decorated 17th-century St Teresa convent was built over the house of her birth. Pope John Paul II celebrated Mass in the chapel during his 1982 visit to the city to mark the 400th anniversary of the saint’s death.

The locals are hoping that Pope Francis will visit Avila next March to mark the 500th birthday of the woman born as Teresa Sanchez de Cepeda y Ahumada.

Around the corner from the convent is the plain church of St John the Baptist, in which St Teresa was baptised on April 4, 1515. It is still being used as a parish church, as obituary sheets on the notice board show.

St Teresa died on October 4, 1582 in Alba de Tormes. She had arrived there 15 days earlier to visit the convent of the Annunciation, which she had founded 11 years earlier. Suddenly she was taken ill and lingered until October 4, the day on which Spain and other Catholic countries switched to the Gregorian calendar – the day after Thursday, October 4 was Friday, October 15. This is why her feast is October 15 (October 4 being the feast of St Francis of Assisi).

Alba de Tormes is a small town in western Spain with a population of just over 5000, though in the 16th century it had 22000 inhabitants and 18 churches. St John Paul II celebrated Mass in 1982 in the large St Teresa basilica, built in 1933, as a statue in its gardens reminds the visitor.

The town’s most famous site, however, is the Annunciation convent, where Discalced Carmelites still live today, and the adjacent church and museum with St Teresa’s tomb.

While St Teresa was ailing, she asked that her sickbed be installed above the altar, so that she could be close to the Eucharist. She was moved from there shortly before her death. In death, she is back in that spot: her tomb presides from behind a grille above the altar.

Her tomb can be seen up close, with the relics of her incorrupt heart and left arm, in the convent church’s extensive museum. 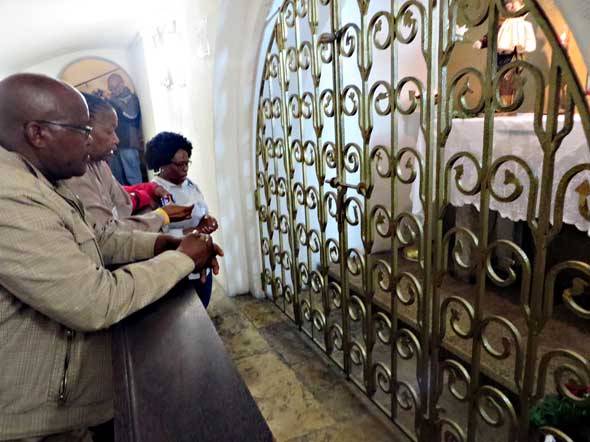 Our group would encounter St Teresa again in France: in Tours, where an altar is dedicated to her in St Gatien cathedral, and in Lisieux, the place of her fellow Discalced Carmelite and Doctor of the Church, St Therese, the Little Flower.

Don’t call St Anthony of Padua by that title in Lisbon, where the locals insist that their most famous saint should be universally known by the city where he was born, not by the Italian city in which he died. So in Portugal he is known as St Anthony of Lisbon.

We had our inaugural Mass in the lovely Baroque-Rococo church from 1767, rebuilt after the great earthquake that destroyed Lisbon 12 years earlier, that stands on the place of the saint’s birth in 1195, just in front of the 12th-century cathedral of Lisbon.

St Anthony and my family are old friends. My wife and I have fond memories of visiting his tomb in Padua in 1999. Some years later I could not find my passport just as I was about to leave on an overseas journey.

Days of searching had produced no results until my wife invoked St Anthony’s help. Literally, in the next place she looked was not only my passport but also a long-lost ID book. To this day I have no plausible explanation as to how these two documents could have ended up in the same disused briefcase. So I was pleased to be at the place of St Anthony’s birth, and moved when the resident priest produced a reliquary with a relic of the saint for our veneration.

Again St John Paul II was present (as he would be everywhere we went): in the crypt of St Anthony’s birth is the bench on which the late pope kneeled during his visit in 1982.

We encountered St Anthony again in Zaragoza, Spain, when we had Mass in the chapel dedicated to him in the basilica of Our Lady of the Pillars (more of which next week).

And our final Mass, in the Miraculous Medal chapel in Paris had an indirect link to him: it was the feast of St Francis of Assisi, founder of the order to which St Anthony belonged.

Next week: Zaragoza, the mother church of Spain, and the Eucharistic miracle of Santarem.