The late motivational speaker Leo Buscaglia said: The person who risks nothing, does nothing, has nothing, is nothing and becomes nothing. 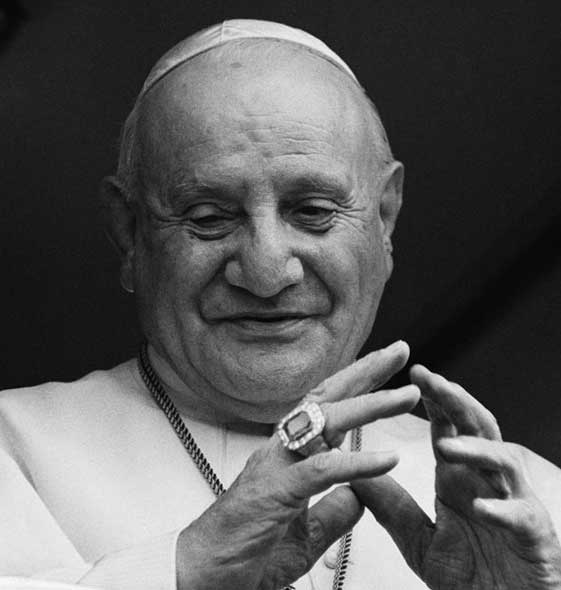 In this Oct. 4, 1962 file photo Pope John XXIII stands at the window of his nine-car train during a brief stop at the small railway station of Orte, during the pontiff’s train trip across Italy, to pray for the success of the Roman Catholic Church’s forthcoming Ecumenical Council. (AP Photo/Mario Torrisi)

This month’s Saint of Christian Unity is Angelo Giuseppe Roncalli  Pope John XXIII  who dared to open a window for a wind of change that has brought us to contemporary Catholic ecumenism.

Christian unity was a defining element in Vatican II. In the opening speech of the council in 1962, Pope John was explicit about the need to reinforce efforts at unity of Christian churches. He regarded promoting ecumenism as a major concern of the Catholic Church.

Unhappily, however, the entire Christian family has not as yet fully and perfectly attained to this visible unity in the truth. But the Catholic Church considers it her duty to work actively for the fulfilment of that great mystery of unity for which Christ prayed so earnestly to his heavenly Father on the eve of his great sacrifice, the pope said.

The knowledge that [the Catholic Church] is so intimately associated with that prayer is for her an occasion of ineffable peace and joy. And why should she not rejoice sincerely when she sees Christ’s prayer extending its salvific and ever increasing efficacy even over those who are not of her fold?

The pope was big-hearted in his vision of unity, thus he spoke of unity of both the Christian and human family in three ways:

Certainly, it was not the first time the Catholic Church talked about unity; nevertheless, there was a big shift not only in the effort but also in the attitude and approach that made a big difference.

Pope John unveiled this new approach when he spoke about the new manner of suppressing error. The Church had always condemned error with severity.

Today, however, Christ’s Bride prefers the balm of mercy to the arm of severity. She believes that present needs are best served by explaining more fully the purport of her doctrines, rather than by publishing condemnations, he said.

The great desire, therefore, of the Catholic Church in raising aloft at this council the torch of truth, is to show herself to the world as the loving mother of all mankind; gentle, patient, and full of tenderness and sympathy for her separated children.

Everywhere, through her children, she extends the frontiers of Christian love, the most powerful means of eradicating the seeds of discord, the most effective means of promoting concord, peace with justice, and universal brotherhood.

The gesture of an all-embracing openness was seen in Pope John’s invitation of non-Catholic observers to the Second Vatican Council. It was the first council to which Christians not in communion with the Catholic Church had been invited.

Pope John also pioneered the formation of the Pontifical Council for Promoting Christian Unity. It was his desire that the involvement of the Catholic Church in the contemporary ecumenical movement be one of the council’s chief concerns. Thus, on June 5, 1960, he established the Secretariat for Promoting Christian Unity as one of the preparatory commissions for the Council. This was the first time that the Holy See had set up an office to deal specifically with ecumenical affairs.

At first, the main function of the secretariat was to invite the other Churches and World Communions to send observers to the Second Vatican Council. Soon, by the will of the pope, the secretariat was elevated to the same level as the conciliar commission and fully participated in the council by preparing and presenting documents to the Council such as Unitatis redintegratio on ecumenism; Nostra aetate on non-Christian religions; and Dignitatis humanae on religious liberty.

Indeed, there are no better words to capture and confirm Pope John as a Saint of Christian Unity than by the words of Dom Lambert Beauduin (featured in January) who, on hearing of the death of Pope Pius XII in 1958, confided to his fellow ecumenist: If they elect Roncalli all will be saved. He will be capable of calling a council and canonising ecumenism. I believe we have a good chance.

Pope John XXIII died on June 3, 1963. He was beatified by another champion of ecumenism, John Paul II, in 2000. Both popes were canonised together in April 2014.