Deacons of the Church – How they have grown

Fifty years ago this year the Church decided to restore the permanent diaconate. DEACON GREG GARNIE explains the significance of the event, and how the world’s deacons will mark it. 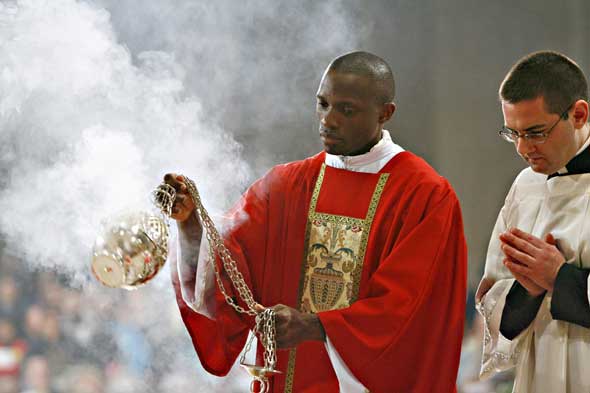 During the Second Vatican Council (1962-65), the Council Fathers approved the restoration of the sacred order of the permanent deacon, according to our ancient apostolic tradition.

This ratified the decision of the Council of Trent, some 400 years earlier, which had approved the restoration of the order in principle. By 1962 it had still not been implemented. Vatican II changed that.

In 1965 some of the Council Fathers of Vatican II, together with priests and laity, protagonists of the restoration of the permanent diaconate, with the express blessing of Pope Paul VI, established the International Diaconate Centre (IDC).

The German bishops agreed to host the seat of the IDC centre, first in Freiburg and since 1992 in Rottenburg, near Stuttgart. The IDC continues to be funded almost exclusively by the German Church for and on behalf of the universal Church.

The vision of the Council Fathers in establishing the IDC was to have a body that would promote, research, study and publish the restored order of permanent deacon for the benefit of the whole Church.

Such work would be carried out in collaboration with the Holy See, specifically the Congregations for the Clergy and Catholic Education. Membership to the IDC is voluntary and is open to any person or group interested in the Catholic permanent diaconate. Current membership includes 130 countries and is growing.

After the restoration of the permanent diaconate, the first permanent deacons were ordained in Germany in 1968, a year after Pope Paul VI issued his apostolic letter Sacrum Diaconatus Ordinem.

In the Inter-regional Meeting of the Bishops of Southern Africa (Imbisa) region, the first permanent deacons were ordained in Zimbabwe (then Rhodesia) in 1979, followed by South Africa in 1981.

According to Vatican Radio, “permanent deacons are booming both globally and in individual continents”.

In Italy alone, as at September 2012, there were some 2000 men in the diaconate formation programme.

In October 2015 the IDC will celebrate 50 years of its founding with a jubilee pilgrimage and celebration in Rome, including a private audience with Pope Francis, for the nearly 500 participants, mostly deacons and their wives.

The theme of the jubilee is “Diaconate: Past, Present, Future”. Honduran Cardinal Oscar Rodreguez Maradiaga will give the keynote address.

In relative time scale, 50 years is miniscule in the overall history of the Church. Yet the restoration of the order of permanent deacon marked a significant turning point in Church thinking, especially for the new and re-evangelisation mission of the Church today.

Our history teaches us that Church councils, beginning with the first Council of Jerusalem during the time of the Apostles (Acts 15:6), are convened in moments when the Church is compelled to revisit her roots, seek her original spirituality, refocus her mission and give answer to the issues of the period.

The Second Vatican Council was no exception, inter alia, deciding to restore what was originally instituted by the Apostles but which had, for various reasons, disappeared from the Latin rite of the Catholic Church by the 5th century.

The foundational spirituality of the early Church was brought into sharp focus, in so doing; the teaching of the early Church also came into focus. Both the New Testament scriptures and the Didach (teachings) of the earliest Church Fathers (pre-130 AD), together with the specific decision of the Council of Trent (1545-63), were key sources used by the Council Fathers when informing their debates and ultimately, their decision to restore the permanent deacon to the Latin rite. However, after 50 years there remain much misunderstanding, misconceptions, confusion, adversity and general ignorance about the origin, identity, ministry and restoration of the permanent deacon.

Therein lies the work of the IDC, in collaboration with the Holy See and with diaconate bodies throughout the Church.

The implications of restoring the order of permanent deacon, given its absence for the past 1500 years, have not been fully explored or understood. There remains the need for careful and objective discernment and ongoing formation.

Over the past 50 years the Church has, at various moments, given more understanding and shown greater insights, yet continues the much-needed discernment.

The document builds on the various earlier documents of the Church, concerning the restored order of deacon, as an instruction to bishops and formators who are responsible for the diaconate in their dioceses.

The early documents include Lumen Gentium (the Dogmatic Constitution on the Church of 1964, one of the principal documents of the Second Vatican Council), Sacrum Diaconatus Ordinem (1967) and Ad Pascendum (1972).

Complementing this instruction is the latest research published by the International Theological Commission, an organ of the Congregation for the Doctrine of the Faith, entitled “From the Diakonia of Christ to the Diakonia of the Apostles” (2003).

This work deals with the Christological origin, spirituality and mission of the stable ministry of deacon, instituted by the Apostles and ultimately the circumstance that led to his demise by the 5th century.

It also deals with the hierarchy conflicts of the 3rd and 4th centuries that saw the emergence of the minor orders to priesthood, including the introduction of the transitory order of deacon as the final stage before priestly ordination.

Both the 1998 and 2003 Church documents are invaluable and essential aids for ongoing discernment of the restored permanent diaconate, as well as the development of a more solid formation programme for aspirants, seminarians, candidates, ordained deacons, priests and bishops.

Deacon Garnie is the vice-president of the International Diaconate Centre. Next week he will explore the development of the diaconate since 1965.