Fruits of a Synod

After three weeks of intense work at the Synod of Bishops on the Family, no significant changes to Church discipline or doctrine are on the cards. 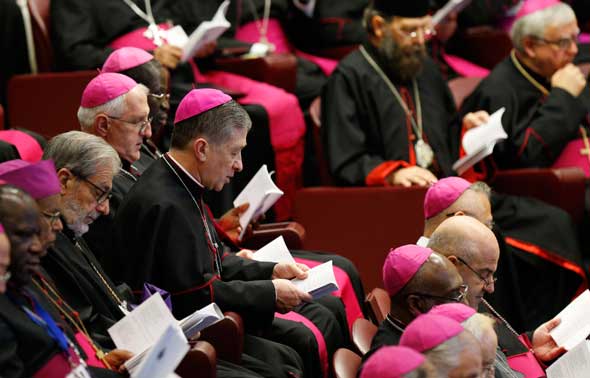 U.S. Archbishop Blase J. Cupich of Chicago participates in prayer at the start of a session of the Synod of Bishops on the family attended by Pope Francis at the Vatican. (CNS/Paul Haring)

There was no agreement on the hot-button issue of finding a way to admit the divorced and civilly remarried to Communion, despite the heated debate that took place after Cardinal Walter Kasper suggested this should be considered.

At the end of the synod there were two reactions: for some, relief that Church teaching has been affirmed; for others, disappointment—especially for those in difficult circumstances who had hoped for some change.

Even though there will be no substantial immediate change in the Church’s position, there have been significant changes.

Right from the first session of the synod, there was an openness and freedom that had not always been enjoyed in the past. Prompted by Pope Francis, delegates spoke their minds freely on once-taboo issues. This immediately revealed divergent views among them.

In the past, it seemed that presenting a “united front” was an imperative. This time we heard phrases like “there are divergent views but we are united in our commitment to the synodal process”.

Another significant change was the role African bishops played. In the past, the voice of the African Church seemed mute. Even after last year’s sitting of the same synod, some African concerns had not made the agenda.

This year the African bishops made sure their pastoral challenges were not only on the agenda but also discussed. There were lengthy discussions about polygamy, poverty, and marriage between Christians and Muslims.

The African bishops downplayed issues such as the admission to Communion of the divorced and civilly remarried. Regarding a welcoming and less condemnatory language towards gays and lesbians, they also said that this was not an alarming issue on the continent as a whole.

Many of the African bishops spoke out strongly against pressure, lobbying and “ideological colonisation”.

It is also important to note the robust debate on decentralisation. Vatican II promoted a healthy subsidiarity but, in recent times, the Church seemed to move in the opposite direction.

Burdened with many diverse issues, which in a number of instances pertain to particular contexts, some delegates asked that cultural/contextual-specific issues be dealt with by local bishops’ conferences. Opinion was split.

Pope Francis seems to favour some decentralisation. In a hard-hitting speech, he said the Church was not a top-down structure but an inverted pyramid where the summit, the pope, is at the bottom and at the service of the People of God. He called for healthy decentralisation.

As for his own role, he said that the pope guides the Church but is “one bishop among many, one Catholic among many”.

Language became central in many of the discussions at the synod. There was a strong call for a language that was “more sensitive and welcoming”.

There was also a call for language that could communicate with people today.

This is significant. Phrases like “intrinsically disordered” or “love the sinner but hate the sin” and “the indissolubility of marriage” made many delegates uneasy. They thought that these were not sensitive or pastorally helpful. Others said that they did not convey Catholic teaching clearly enough.

What next? Pope Francis will decide on the way forward. He has read what the Church all over the world had to say from local surveys and listened intently—he attended the sessions—to what the bishops had to say. He also has the synod report in his hands.

Usually the pope writes an apostolic exhortation on a synod, pointing the way forward for the Church. This may take a while.

In the words of synod delegate Fr Antonio Spadaro SJ, this point in history is “a very delicate moment where you realise the relationship between the Church and the world is at stake”.

What Pope Francis does next will indicate just how the Church will handle this “delicate moment”.

Fr Pollitt is the director of the Jesuit Institute in Johannesburg. He followed the synod as a special reporter for Vatican Radio.

Did you enjoy reading this article or find it helpful?
Our Catholic journalists need your support so that they can continue to bring the Good News to our country, so badly in need of Godâ€™s healing hand. Please consider subscribing to The Southern Cross Magazine or becoming a Southern Cross Associate so that our work can continue.